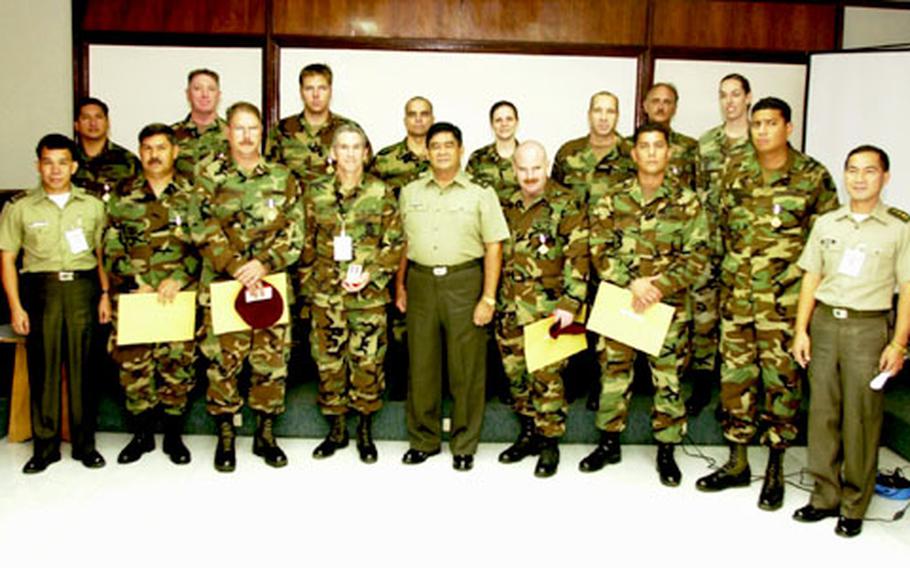 (NOTE: The following correction to this story was posted on Dec. 18:

MANILA, Philippines &#8212; They walked into towns where the dust barely had settled from terrorist bombs to show their support and offer help.

After two years of such work in the country, the current U.S. civil affairs mission to the Philippines has ended. The final 17 civil affairs soldiers said goodbye to their projects and headed home this week. Plans are in place for a new humanitarian mission to begin next year.

Civil affairs operations began in 2000 during Balikatan, the six-month operation in the impoverished and largely Muslim south, where Philippine troops, aided by U.S. advisors, worked to clear communities of terrorist strongholds.

Then civil affairs troops filled the void with engineering and medical help.

The goal was to help the Philippine government and its military &#8212; not that of the United States &#8212; gain legitimacy. &#8220;The whole thing is to bring a favorable light to the AFP&#8221; or Armed Forces of the Philippines, said Capt. Tim Clemente, detachment commander with 426th Civil Affairs Battalion, foreign internal defense-unconventional warfare.

The work continued in the south and later spread across the nation. The detachment later grew this year to 17 soldiers, who set about winning hearts and minds &#8212; the civil affairs motto.

And they battled exhaustion, both physical and emotional. Local leaders, for instance, sometimes fought for projects that would benefit themselves as opposed to their people; the unit&#8217;s soldiers indicated they had to be able to discern the difference.

Almost routinely, they had to do jobs for which they&#8217;d never trained. They spent money out of pocket to augment projects. And they faced threats of terrorist attacks daily &#8212; made more dangerous when they carried few or no weapons.

&#8220;Civil affairs operates best when they&#8217;re light and do not appear to impose a threat,&#8221; Clemente said. But being light also means being less secure.

The AFP supported the groups during their missions but it operated with the U.S. forces protection some civil affairs units enjoy. Some visits were cut short when security became threatened; D&#8217;Antonio reportedly once was forced to leave Manila after opposition leaders began showing a particular interest in him.

For their efforts, the Philippine government awarded team members from the 426th a Military Civic Action Medal on Monday.

&#8220;We can never quantify the highly visible results that have come about,&#8221; Gen. Edwin H. Vargas, deputy chief of staff for the AFP&#8217;s civil military operations, told the medal recipients. &#8220;What you have done is of great value to our country and people.&#8221;

The soldiers have left the Philippines now but several indicated they&#8217;d return if they could, even if it would mean another stretch in sweltering heat and poor conditions.