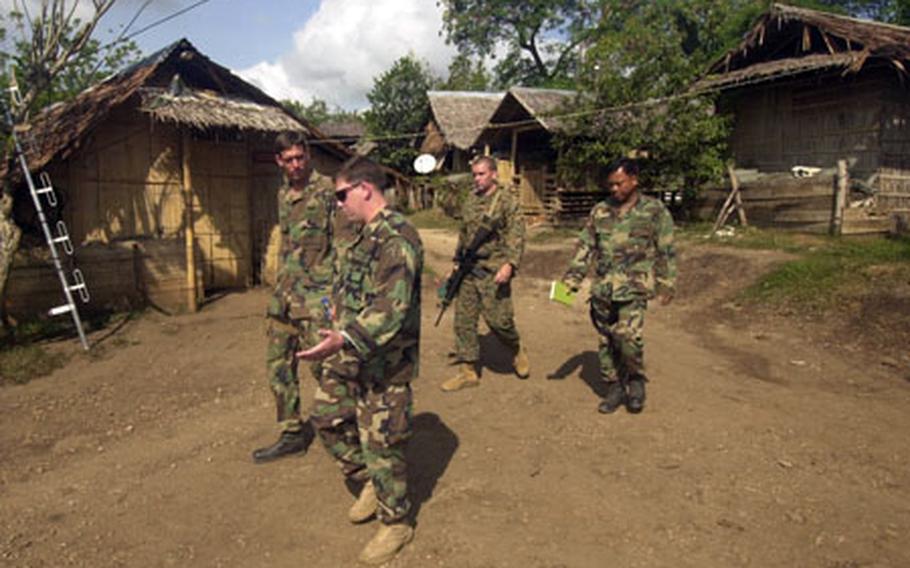 Civil Affairs Team 761&#39;s Sgt. 1st Class Woodrow Wilson III walks visitors through the “Seit Poblasion” Philippine marine base where they live on Jolo Island, Philippines. The camp sits near the center of the kidney-shaped island and on the edge of a volcanic crater lake. (T.D. Flack / S&S)

They live on Jolo&#8217;s &#8220;Seit Poblasion&#8221; Philippine marine base overlooking a volcanic crater lake, surrounded by a beautiful jungle and monkeys that screech through the night.

Most of the buildings are bamboo with thatched roofs, though the team&#8217;s house is a bit sturdier.

U.S. Army Capt. Steve Battle, the team leader, lives there with a sergeant, a medic and an engineer. And recently they&#8217;ve added a U.S. Marine staff sergeant who is gathering information on a mission that will help the Marine Corps work on setting up its own civil-affairs teams.

They&#8217;re fully embedded with the Philippine marines and only sporadically make the 45-minute drive back to their advance operating base for mail and other supplies.

Sgt. 1st Class Woodrow Wilson III, team sergeant, said life in the house is relatively comfortable. They contract with a local man to buy and deliver their food, which they cook themselves.

They have built a small gym that overlooks the lake, and they use the lake&#8217;s icy water to shower.

They have a computer with commercially contracted &#8212; and sporadic &#8212; Internet access and a television.

Even though it looks like life on a television reality show, the reality is that it&#8217;s still a military base amid &#8220;bad-guy land,&#8221; and troops have to stay alert.