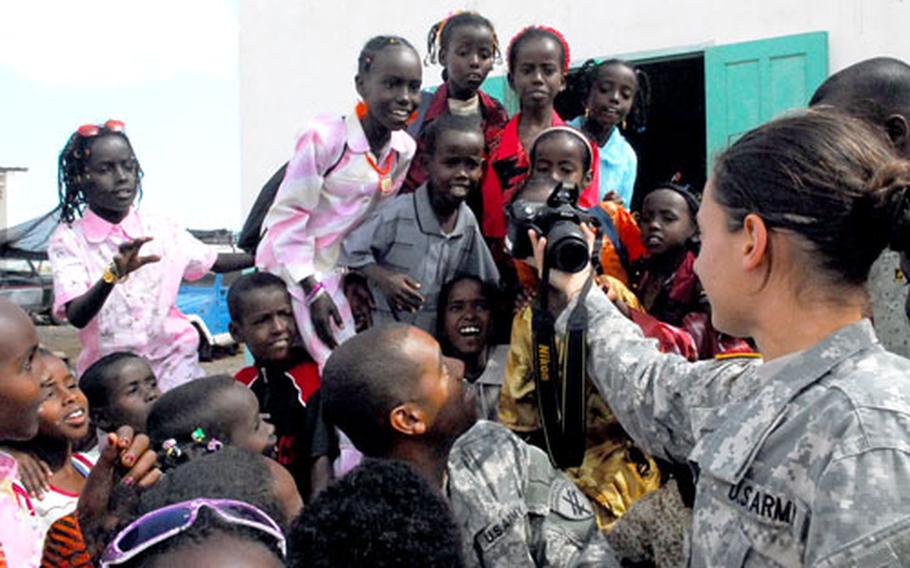 U.S. Army Cpl. Nicole Deal, 20, of Mishawaka, Ind., shows nomadic children a photo she took of them during a visit Saturday to their school on the outskirts of Djibouti City. (Monte Morin / S&S)

U.S. Army Cpl. Nicole Deal, 20, of Mishawaka, Ind., shows nomadic children a photo she took of them during a visit Saturday to their school on the outskirts of Djibouti City. (Monte Morin / S&S) 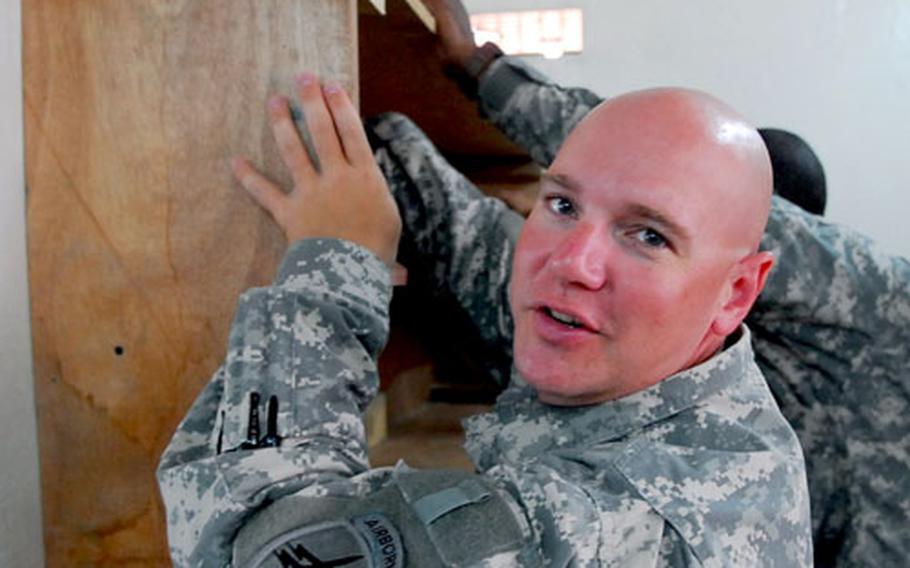 DJIBOUTI CITY, Djibouti &#8212; On the sun-blasted streets of this ramshackle port city, where narcotic &#8220;khat&#8221; leaves are sold by the bale and homeless families camp in back alleys, U.S. Army Capt. Jason Fleming and his civil affairs team stand out like sore thumbs in their pixelated combat uniforms.

But standing out in public, Fleming said, is what his job is all about.

For roughly two months now, members of Company B, 489th Civil Affairs Battalion have been working at making themselves familiar faces in this small East African capital. Like other civil affairs teams attached to the Combined Joint Task Force &#8211; Horn of Africa, Fleming&#8217;s team hopes that its ongoing humanitarian aid projects will promote stability in a region long plagued by poverty, famine and war.

Based at Camp Lemonier, a former French Foreign Legion barracks, CJTF-HOA comprises roughly 1,500 U.S. service personnel whose overarching mission is to prevent Islamist militants from gaining a foothold in this troubled region. The effort involves providing military to military training to Ethiopia, Kenya and Djibouti &#8212; U.S. allies in the war on terror &#8212; as well as humanitarian assistance like flood relief, well drilling and medical care for people and farm animals.

On Saturday, Fleming&#8217;s team spent the morning visiting a small English language library and language instruction center just blocks from downtown Djibouti, as well as a small elementary school on the outskirts of the city.

At the library, Fleming and his soldiers trooped into the tiny center and installed a new set of bookshelves and chatted with library patrons.

&#8220;We like to get outside the wire as much as possible,&#8221; Fleming said. &#8220;The people who are attracted to civil affairs are the kind of people who like to get off base.&#8221; The team is made up of Army reservists from throughout the country and consists of students, government workers, professionals and tradesmen.

The work is very rewarding, they say.

At PK 20, an elementary school for the children of local nomadic families, Sgt. First Class Gary Robinson, 40, of Bowie, Md., described a variety of improvements the team had made to the school. (The name of the school PK-20 is a reference to the school&#8217;s distance from downtown Djibouti &#8212; 20 kilometers.)

&#8220;We came here about a month and a half ago and installed a new water cistern,&#8221; Robinson said. &#8220;Prior to that they were using an old rusted-out barrel for their drinking water.&#8221; Other improvements included hooking up electrical power to school buildings, providing books and other school supplies and handing out soccer balls to the children.

The school has roughly 150 students and is beside a vast garden that is used to grow food for the children. The school is a favorite of the civil affairs team.