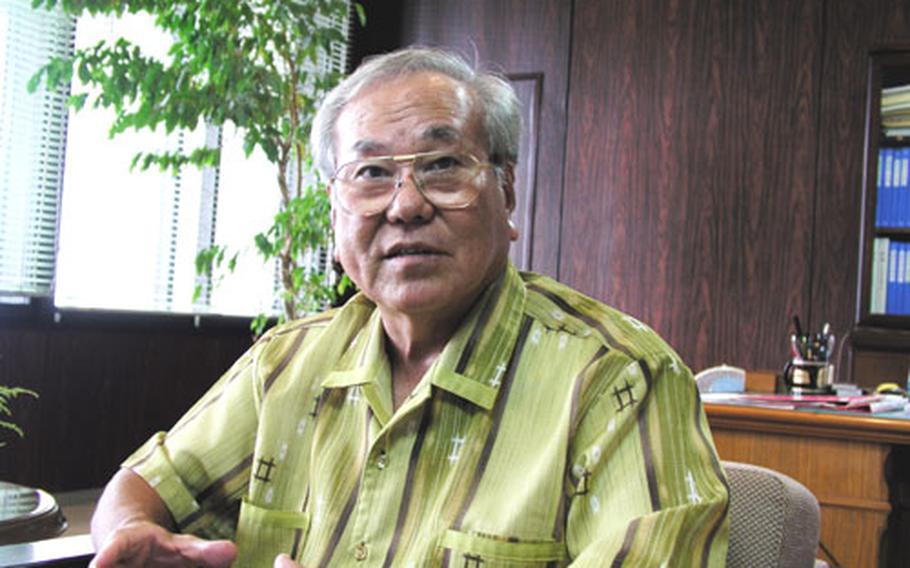 Kadena Mayor Tokujitsu Miyagi says anxiety among Okinawans over the safety of military aircraft has heightened after the Aug. 13 helicopter crash in Ginowan. He and the mayors of Okinawa City and Chatan want the Air Force to cancel an air show scheduled for Sept. 15. (Chiyomi Sumida / S&S)

KADENA, Okinawa &#8212; The mayors of the three municipalities that host Kadena Air Base want the Air Force to cancel a Thunderbirds air show scheduled for Sept. 15.

The mayors reached consensus that they would consider air acrobatics by the Air Force&#8217;s elite team of F-16s inappropriate in the wake of a Marine helicopter crash in Ginowan Aug. 13.

&#8220;The Tripartite Council agreed yesterday to ask the Air Force to cancel the air show planned for AmericaFest,&#8221; Kadena Town Mayor Tokujitsu Miyagi said Tuesday. Miyagi chairs the council, which is made up of officials from Kadena, Okinawa City and Chatan.

He said the council initially didn&#8217;t object to the air show. On Aug. 5, it requested that the Air Force &#8220;pay maximum consideration to ensure safety of residents and communities to conduct the air show,&#8221; Miyagi said.

&#8220;Because the air show was a part of an important festival for the military community, we only made a request concerning safety,&#8221; he said. &#8220;We place importance on deepening understanding and maintaining mutual cooperation with the military.&#8221;

But that changed after a Marine CH-53D Sea Stallion helicopter crashed on the campus of Okinawa International University, next to Futenma Marine Corps Air Station.

&#8220;The situation surrounding us has greatly changed since the helicopter crash,&#8221; Miyagi said.

The mayor was in Bolivia with Okinawa Gov. Keiichi Inamine and other Okinawa officials at the time of the crash to commemorate the 50th anniversary of a settlement of Okinawa immigrants to that South American nation.

&#8220;Under the present situation, it would be almost impossible to obtain the understanding and support of the people of Okinawa for the air show.&#8221; Accordingly, he said, &#8220;we decided to call for its cancellation.&#8221;

Miyagi said the council plans to file its request to the Air Force on Monday. He said the council wants only the air show, not the festival itself, to be canceled. The two-day event is to open Sept. 14 with a day for members of the U.S. military community; it&#8217;s to close Sept. 15 with an open house for the Okinawa community.

Kadena Air Base officials await the official request, base spokesman Chip Steitz said Tuesday. &#8220;Overall,&#8221; he said, &#8220;we&#8217;re still planning a culturally exciting open house here at Kadena. That said, it would be inappropriate for us to discuss last night&#8217;s meeting by local mayors, or our America- Fest schedule, until they have first had a chance to present their concerns to the 18th Wing.

&#8220;We anticipate a meeting this upcoming Monday between wing and community leaders,&#8221; he said.

&#8220;I can assure you that we would not have put those helicopters back in the air unless we were firmly convinced that they were safe,&#8221; Gen. Michael Hagee said at the National Press Club in Washington, D.C.

Okinawa officials expressed their anger Sunday when six Sea Stallion helicopters flew from MCAS Futenma to join the 31st Marine Expeditionary Unit for deployment to Iraq. Prefectural and local officials have called for halting all air activity there pending full disclosure of the results of an investigation into the crash.

The investigation &#8220;is still under way, but the initial report indicated to us that by doing a couple of things, which I can&#8217;t go into until the investigation is completed, those helicopters can fly safely,&#8221; Hagee said.

&#8212; Carlos Bongioanni contributed to this report.