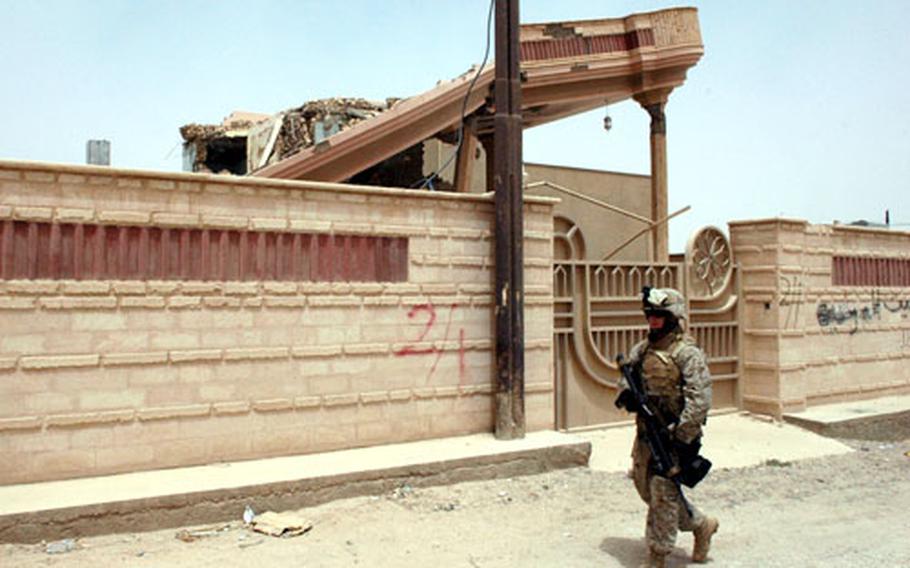 Lance Cpl. Vincent Gutilla, 20, from Fresno, Calif., patrols in the city of Husaybah, where there remains damage and markings from November, when the 2nd Battalion, 1st Marines pushed though in a house-by-house search. Husaybah has been largely quiet since the Marines pushed insurgents out six months ago and set up a series of patrol bases, but two recent suicide bombings show problems remain. (Andrew Tilghman / S&S)

HUSAYBAH, Iraq &#8212; Tribal leaders have espoused an unwavering optimism since November, when thousands of U.S. Marines fought fierce opposition to quell this troubled border city that was a haven for insurgents and smugglers.

Amid the recent calm, the new city leaders have gathered regularly to sip tea and denounce the violence that gripped their city for years. They talked about ways to open a police station, to rebuild the city and create a working government.

But the two suicide bombers last week that targeted the newly opened police station &#8212; which killed five police officers and injured more than a dozen &#8212; will force local leaders here to do more than simply talk.

In this hardscrabble town on the banks of the Euphrates River and near the Syrian border, the suicide bombers have shattered the tentative peace and confirmed fears that insurgents remain in the region. The attacks mark the start of the latest chapter of life in Husaybah, where an ongoing struggle has evolved from outright war to a bloody tribal battle between longtime neighbors, and then to a simmering mix of scattered attacks and something resembling stability.

Security is undoubtedly better than it was a couple of years ago. Lance Cpl. Allen Caruselle, 20, went on daily patrols in the fall of 2004, when the tribes of Husaybah appeared united in their hatred of the Marines.

Caruselle recalled that the Iraqi soldiers they were working with abandoned their camp and fled the city in 2004. Children often made gun-shooting motions with their hands and fingers. And soldiers braced for a gunfight every time they left their gate.

Caruselle&#8217;s battalion saw at least 15 Marines killed during its seven-month deployment in 2004. By comparison, the battalion has lost three Marines since arriving in March, Marines said.

The Marines first tried to tame the region in early 2004, mounting a large operation and scouring the city that had become a haven for insurgents. But shortly after the large units of U.S. troops left the area, the insurgents returned and continued to attack the contingent of Marines that remained.

In the summer of 2005, the alliance of local tribes and out-of-town insurgent leaders began to fracture. The Marines began to see and hear gunbattles between the tribes, as some locals turned on the insurgents and allied tribes.

Many residents fled as the violence between local tribes, insurgents and Marines grew.

&#8220;It was a big problem, the tribes all had AKs and they were fighting in the streets,&#8221; said Adnan Habash Abrahim, who moved with his family to a desert village about 50 miles south of Husaybah, where they spent several months living in tents and waiting for the violence to ebb. He returned in December.

By the summer of 2005, Husaybah was effectively off limits to the Marines, who retained a patrol base on the city&#8217;s edge, but often took mortar fire and rarely entered the city.

In the fall of 2005, the Marines began to take advantage of the area&#8217;s tribal dispute. U.S. forces armed and trained fighters from the Abu Mahal tribal militia, the Khatab Al Hamsa. Dubbed the &#8220;Desert Protectors,&#8221; hundreds of tribal militiamen helped the Marines mount a massive force that conducted a house-by-house search of the city.

The troops faced resistance for several days, but eventually saw most insurgents flee, leaving behind one last gauntlet of roadside bombs and booby-trapped homes.

This time, however, the Marines did not pack up and leave. Instead, they set up a network of small, platoon-sized patrol bases throughout Husaybah and nearby villages. From those outposts, they patrolled on foot, met with locals and began recruiting a local police force that would prevent insurgents from returning.

&#8220;History shows us that in order to be successful in counterinsurgency, you have to be among the people,&#8221; Jones said.

In the first six months, the strategy has been mostly successful, making the Husaybah and Qaim region one of the calmest and safest in all of Anbar province.

Marano said he is not surprised that some attacks have resumed since the sweep last November.