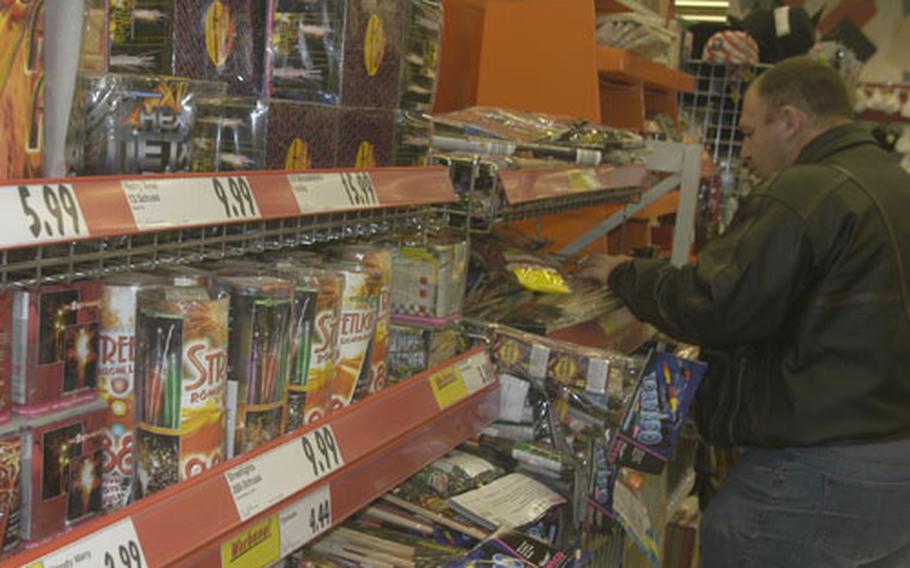 Fireworks, with names like Bloody Mary and Hell Fire, pack the shelves of a German store in Stuttgart, Germany. Fireworks are as much a part of a German New Year’s celebration as a midnight kiss. (Charlie Coon / S&S)

Fireworks, with names like Bloody Mary and Hell Fire, pack the shelves of a German store in Stuttgart, Germany. Fireworks are as much a part of a German New Year’s celebration as a midnight kiss. (Charlie Coon / S&S) 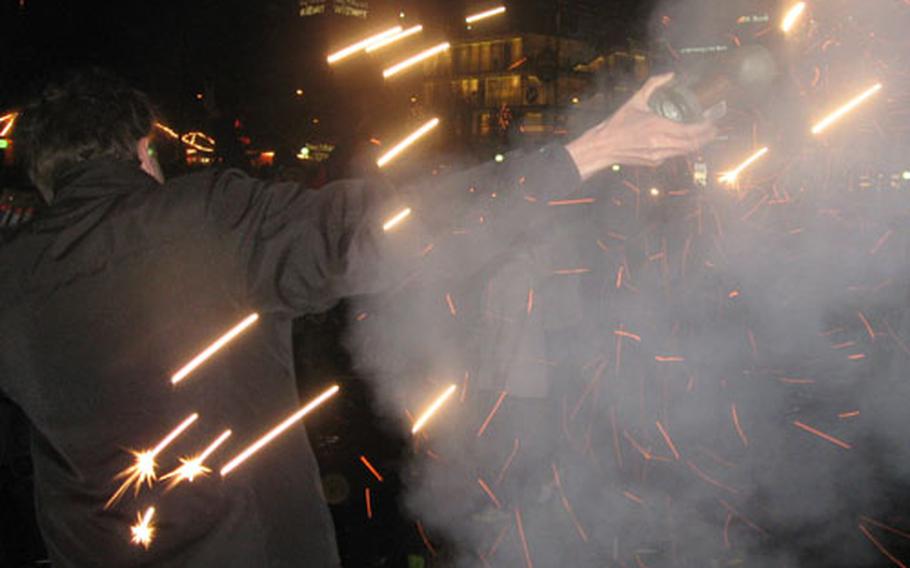 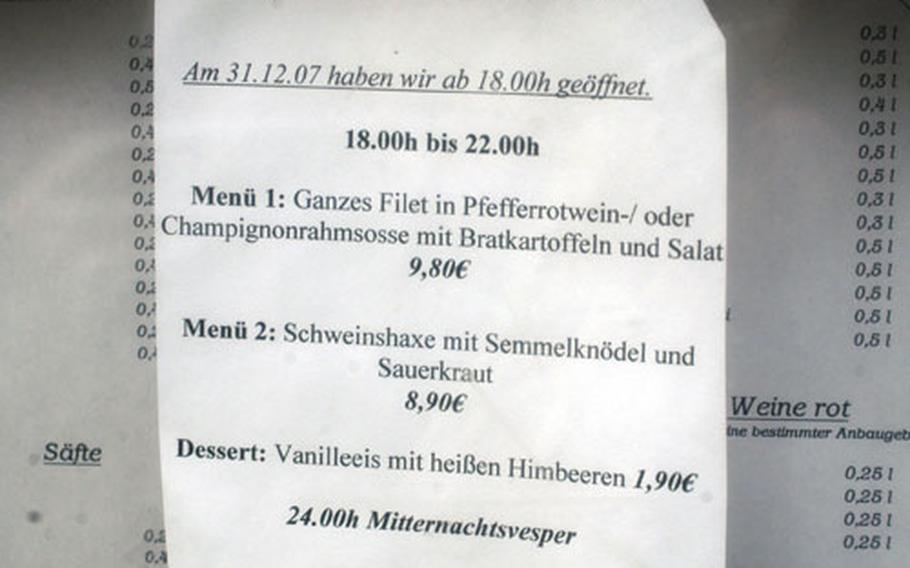 Many of your favorite corner restaurants in Germany will be closed on New Year&#39;s Eve to people who do not have reservations, such as this one in Stuttgart offering a menu of schnitzel filet and pig&#39;s lower leg. Vorbestllung verbeten means "reservations requested." (Charlie Coon / S&S)

STUTTGART, Germany &#8212; Americans who venture off post in Germany to celebrate New Year&#8217;s Eve better be prepared to duck the fireworks. They should also expect to find restaurants booked up.

Many German people go out to eat, and then take to the streets to light firecrackers, shoot bottle rockets and torch Roman candles.

The epicenters of festivities are the various city centers. In Stuttgart, thousands of people ring the huge Schlossplatz to snap, crackle and pop. It doesn&#8217;t hurt to come well covered-up, and not just because of the chilly weather.

&#8220;They&#8217;re all over the sky, and you&#8217;re being rained on by sticks, cardboard and spent tissue paper from the fireworks,&#8221; said Petty Officer 1st Class Chuck Nagy of Special Operations Command Europe.

In ever-organized Germany, people make plans. One of the main plans is to dine out. So unless one intends on hitting a doner kebab stand or other fast-food joint, don&#8217;t count swooping into a restaurant and fining a table.

&#8220;Either you have private dinner at home or go out for dinner. But that is the typical way to have Sylvester.&#8221;

The New Year&#8217;s Eve celebration in Germany is called Sylvester, named after a fourth-century pope who supposedly cured the Roman emperor of leprosy.

To fully spread New Year&#8217;s cheer, celebrants might learn a little of the party language.

But for the all-important midnight celebration, when rockets are flying and people are shaking hands, hugging and kissing, lift a glass and exult, &#8220;Prosit Neujahr!&#8221; Pronounced proast noy-yar, it means &#8220;Happy New Year!&#8221;

The downtowns are not the only places that light up.

Celebrants can be found on side streets and on the balconies of their homes.

&#8220;And every single person is going to have a pocketful of explosives,&#8221; said Kathy Gaucher, wife of a Stuttgart contractor.

Like many, Gaucher will be celebrating at a house party overlooking the spectacle.

Some of the bigger hotels host their own New Year&#8217;s balls.

One of the large hotel complexes in Stuttgart - the SI Centrum - blocks off the street in front and provides its own fireworks and music.

For the timid, do not expect to find the big-boomer firecrackers like M-80s, cherry bombs and quarter-sticks. The explosives in Germany are low-caliber, but the celebrants make up for the lack of firepower with sheer volume.