City, AAFES at odds over taxis at Camp Casey 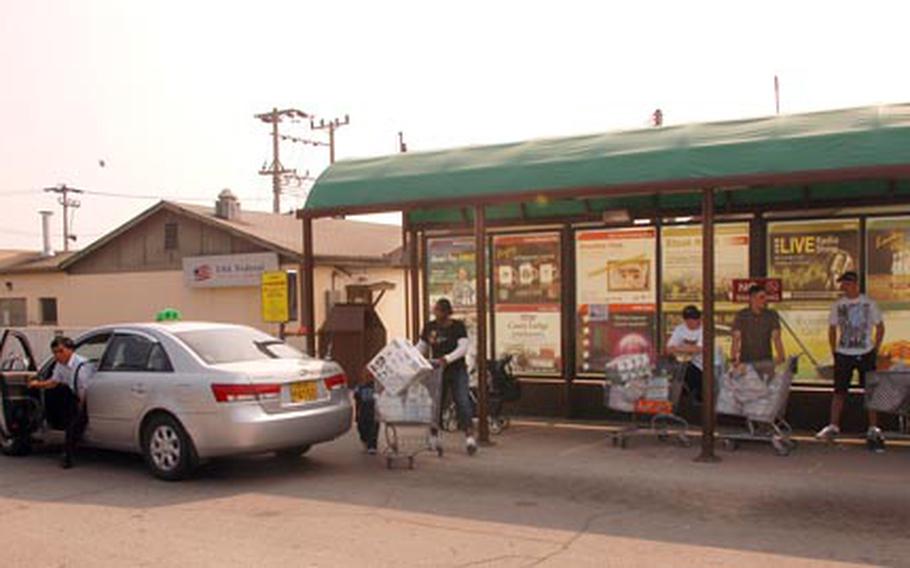 Soldiers wait in line outside the Camp Casey commissary for a taxi Friday. Dongducheon&#39;s mayor is disputing a new contract that would add about 50 more taxis to the base following Army and Air Force Exchange Service&#39;s dismissal of Worldcup Arirang Tourism Co., the base&#39;s former taxi carrier. (Erik Slavin / S&S)

CAMP CASEY, South Korea &#8212; The Camp Casey enclave&#8217;s taxi service has become the basis of a tug of war between a Dongducheon mayor&#8217;s angry constituents and military officials trying to provide reliable transportation for servicemembers.

Army and Air Force Exchange Service officials said Friday they still plan to have Kumkang Taxi fulfill its recently signed contract as the area&#8217;s primary provider, despite Mayor Oh Se-chang&#8217;s decision to order the taxis off the post after less than a day on Tuesday.

Kumkang signed on in the Camp Casey area to replace Worldcup Arirang Tourism Co., whose drivers had been on strike since April 18 throughout U.S. Army garrisons Red Cloud and Yongsan. Yongsan AAFES officials severed their contract with Worldcup Arirang on June 4, citing default on the contract. U.S. Army Garrison-Red Cloud, also known as Area I, did the same in May and gave the company until June 15 to leave its Camp Mobile office.

Kumkang taxis began picking up servicemembers Tuesday at Camp Casey and its outlying areas, only to be called back by the mayor because of an off-post taxi shortage.

"It was unfortunate because it seemed like the soldiers were ready for [the drivers] to take care of them," said Ken Limtiaco, Area I AAFES general manager.

Oh met with Limtiaco and Area I commander Col. Larry Jackson on Wednesday, proposing that AAFES hire Worldcup back under different management and a new name.

Officials from both sides are scheduled to meet again Wednesday

However, Oh is under political pressure on multiple fronts.

About 100 of Worldcup&#8217;s 250 drivers are Dongducheon residents, said Song Myung-seok, of Dongducheon&#8217;s traffic and administrative division.

On average, each driver supports a wife and two children, Song said, and drivers make about $1,000 per month in salary, commission and tips.

"Whatever measures will be taken, the city doesn&#8217;t care as long as our people can hold their jobs for their families," Song said.

At any given time, 219 taxis operate in Dongducheon, Song said. On Tuesday, 59 were on post, depleting the city&#8217;s normal taxi stock by about 27 percent.

Since the Worldcup strike began in April, the sprawling Casey enclave has relied on 10 Yonhap Taxi drivers. They now have about 30 independent operators driving on post.

Servicemembers in Area I aren&#8217;t allowed to drive personal vehicles. Without taxis, soldiers at places like Camp Hovey must either wait for buses or walk four miles just to get to the Camp Casey main post exchange and commissary.

"About two weeks ago, I waited about an hour for a taxi," said Sgt. Kyle Nussbaumer, of the 2nd Infantry Division&#8217;s 6th Battalion, 37th Field Artillery.

The choice between a long wait and a long walk is even more difficult for spouses living in town and who grocery shop for their families on post, Limtiaco added.