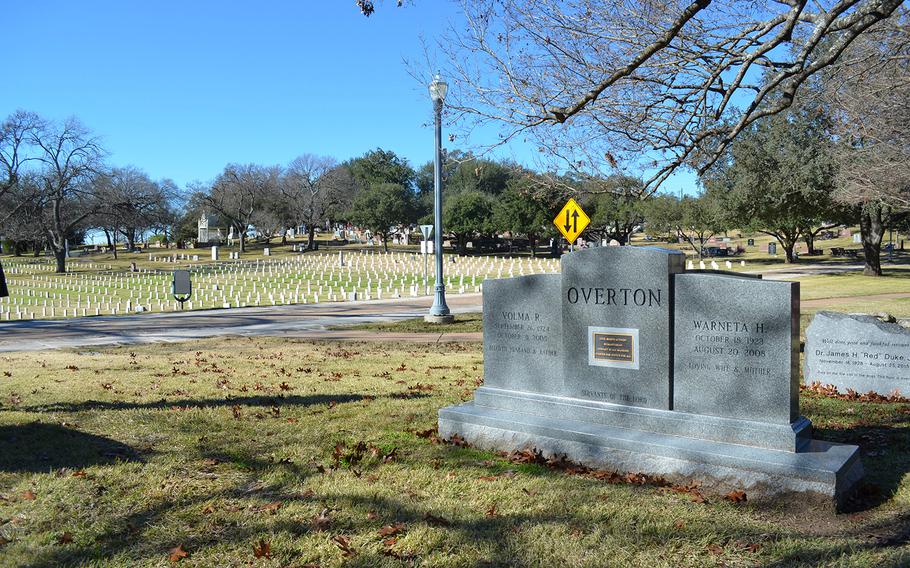 Buy Photo
The future gravesite of Richard Overton, a World War II veteran and America's oldest man, is seen Jan. 4 at the Texas State Cemetery in Austin. Overton died Dec. 27 and will be buried next to his cousin, retired Army Lt. Col. Volma Overton Sr., a civil rights activist. Just behind their graves are those of about 1,800 Confederate War veterans. (Rose L. Thayer/Stars and Stripes) 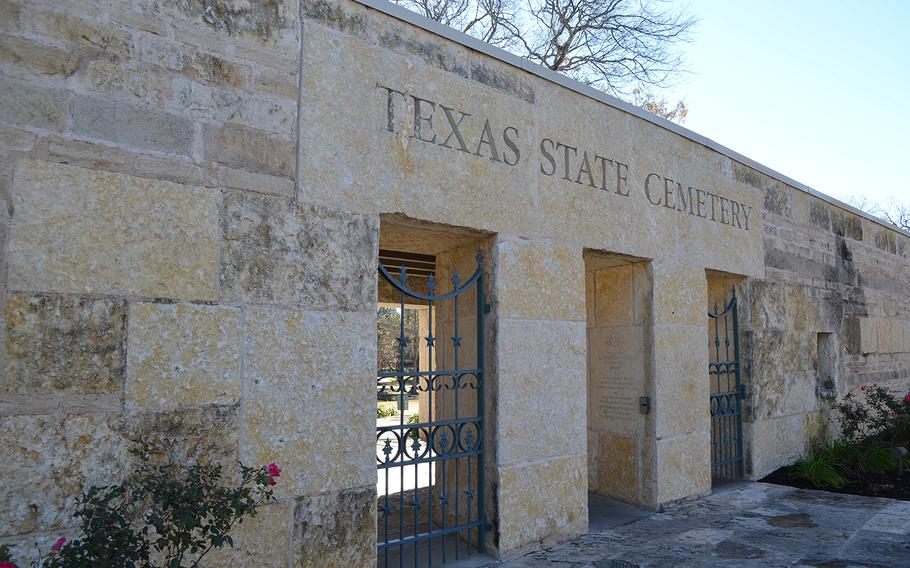 Buy Photo
An entrance to the Texas State Cemetery in Austin is seen on Jan. 4, 2019. (Rose L. Thayer/Stars and Stripes) Buy Photo
The gravesite of Navy SEAL Chris Kyle at the Texas State Cemetery in Austin is the most visited in the cemetery. (Rose L. Thayer/Stars and Stripes) Buy Photo
The gravesite of former Texas Gov. John Connally is seen Jan. 4 at the Texas State Cemetery in Austin. Connally, a World War II Navy veteran, also served as the secretary of the Navy and secretary of treasury. The English field stone marker is rumored to be more than 800 years old. (Rose L. Thayer/Stars and Stripes) 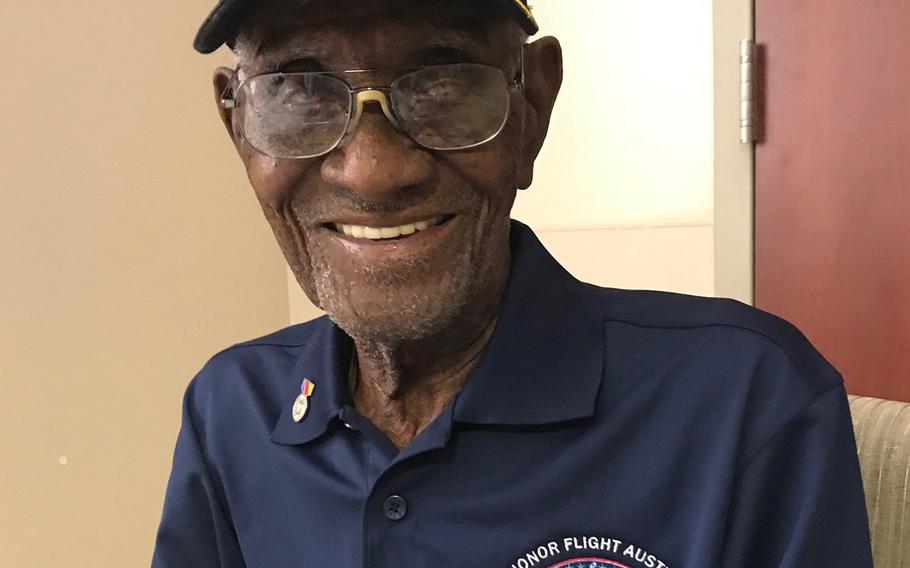 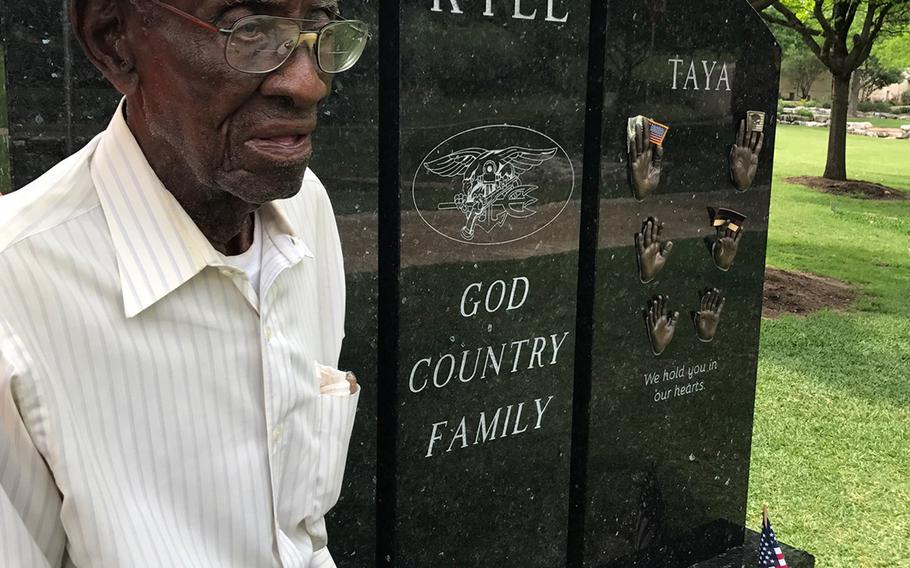 Richard Overton during a visit to the Texas State Cemetery. (Allen Bergeron/Courtesy Photo) AUSTIN, Texas –- When America’s oldest veteran is buried Saturday at the Texas State Cemetery, he will rest in the company of many other notable figures of American military history.

Richard Overton, who died Dec. 27 at age 112, was a veteran of World War II and America’s oldest man. The lifelong Texan will be buried in the same cemetery as many of the state’s most famous politicians, veterans and founding fathers.

“It’s not a veterans’ cemetery, but many people buried here just happen to be veterans,” said Will Erwin, senior historian at the cemetery, about 1 mile from the Capitol. They include storied Texas Longhorns coach Darrell K. Royal, former Texas Lt. Gov. Bob Bullock and astronaut Eugene Cernan, the last man to walk on the moon.

Overton’s fame began when his age attracted attention from local media and politicians — as did his love for smoking cigars on the front porch. From there, his infectious personality drew the attention of the nation.

“That’s the draw to Mr. Overton, he doesn’t have to fake it, he’s just being himself,” said Allen Bergeron, a retired Marine and Austin’s veterans program administrator. He considered Overton to be a close friend since they met about six years ago. “People who’ve known him for many years say the same thing, he doesn’t change.”

Overton was born in 1906, the grandson of slaves, among the cotton fields his family worked in Bastrop County. He joined the war effort in 1942, when he was 36.

He served in the Pacific theater, including Guam, Okinawa and Iwo Jima. He left the service in 1945 with a Bronze Star medal and spent the rest of his working life in furniture sales and later in the state treasurer’s office when future Texas Gov. Ann Richards ran the agency. She, too, is buried at the state cemetery.

During his final years, Overton had breakfast with President Barack Obama for Veterans Day, celebrated his birthday with Gov. Greg Abbott with cake at the governor’s mansion and hosted former presidential candidate and Texas Gov. Rick Perry on his front porch, Bergeron said.

Bergeron, who is helping with the funeral, said it will include full military honors and enlist the support of Austin’s Army Futures Command, as well as units from Fort Hood and Camp Mabry. There will also be an official flyover,

Of all the veterans in the cemetery, there was one whom Richard Overton wanted to be near -- his cousin Volma Overton Sr. Best known as a civil rights activist, he served in the Marines during the Korean War and later retired from the Army Reserves as a lieutenant colonel.

After he returned from the Korean War, Overton put on his Marine Corps dress blues and entered the Reserves office, intending to continue to serve as a Marine, said his son, Volma Overton Jr., an Army veteran who is planning the funeral.

His father was turned away, he said. Using a racial slur, the recruiter at the Marine Reserves told him he couldn’t join because there were no African-American Reserve units. He was sent to the Army Reserve offices.

That moment had a lot to do with his father’s activism and push for equality, his son said.

“He’d seen so much,” he said. “He wanted to change the world so his kids didn’t have to go through what he went through.”

The two cousins’ burial site is in the newer part of the cemetery, with small hills, plenty of old, shady trees and elaborate headstones that appear sporadically placed. Nearby is retired Army Col. Robert Lichtenberger, who served as national commander of the Military Order of the Purple Heart, and Kyle Thompson, a World War II veteran who was held prisoner by the Japanese for more than three years. As part of 2nd Battalion, 131st Field Artillery Regiment, the entire unit was captured and became known as the “Lost Battalion.” Thompson was one of the men who endured the brutality of building the Japanese “Railroad of Death” and worked to construct the railway bridge featured in “The Bridge on the River Kwai.”

Just out of view from Overton’s gravesite is the most visited headstone in the cemetery –- Chris Kyle, the decorated Navy SEAL and sniper who was killed at a Texas shooting range by a troubled veteran. Kyle’s service is immortalized in the movie “American Sniper.”

“International tourists come to see him,” Erwin said, adding that once the movie was released in 2014, Kyle’s grave became even more popular.

Farther out near the political side of the cemetery is the large headstone of World War II Navy veteran John Connally. He served as secretary of the Navy under President John F. Kennedy, then left the post to be elected governor of Texas. He was wounded in the gunfire that killed Kennedy in Dallas.

Years after his governorship, Connally served as treasury secretary under President Richard Nixon and had a short, unsuccessful run for president in 1980. It’s rumored that the tall black statue on his headstone is made of 800-year-old English field stone, Erwin said. Connally and his wife bought it at auction while in England.

Once visitors continue across a pathway to the older part of the cemetery, they will encounter some of the original graves -– about 1,800 Confederate veterans who died years after the Civil War in Austin’s Confederate Men’s Home, Erwin said. It is the most streamlined area of the cemetery, with most of the graves marked by fading white stones.

Also near this section are two Revolutionary War veterans who fought in the Texas Revolution and many of the Texas founding fathers, including Stephen F. Austin.

Because of the large number of Confederate graves, the cemetery was long thought of as a Civil War cemetery, Erwin said. Among its nine Confederate generals, Albert Sidney Johnston is the biggest draw. His memorial is the largest and most elaborate grave in the cemetery. A graduate of West Point, he resigned his commission because his wife became ill. Later, he joined the Texas Army and fought in its war for independence. During the Civil War he commanded the Western Department of the Confederate Army.

Johnston is one of many complicated figures in Texas history. Volma Overton Jr. said he attended a predominately minority Austin high school named for Johnston. The name still holds on one of the Austin school district’s campuses, but it is slated to be changed because of its Confederate ties.

“They realized that that is just part of our history and our heritage and it is what it is,” Bergeron said. “The draw in his character is that he looked at all people the same. He didn’t see a difference.” Richard Overton was known for feeling blessed for each day he was given late in life, Bergeron said. But like most who survived war, Overton wondered what kept him alive for so long.

In lieu of flowers, the family has asked for donations to Honor Flight Network, a nonprofit that flies veterans to war memorials in Washington, D.C. Bergeron, who founded Honor Flight Austin and is an honorary board member, said the group is searching for remaining World War II veterans who are able to make the all-expenses-paid trip, just as Overton did several times.

During one of those trips, Bergeron said their bus entered Arlington National Cemetery, and the tour leader played a clip of a speech from President Ronald Reagan about the cemetery. When it was over, the bus was silent, but Bergeron said he could see Richard Overton gazing out the window at all the gravestones and mumbling to himself. Bergeron said he held a microphone up to the veteran’s mouth.

“He said, ‘Oh why, why? Why all these soldiers gone and I’m still here?’” Bergeron recalled. “He kept saying that.”

After 112 years, the soldier will finally rest among fellow veterans who have gone before him.