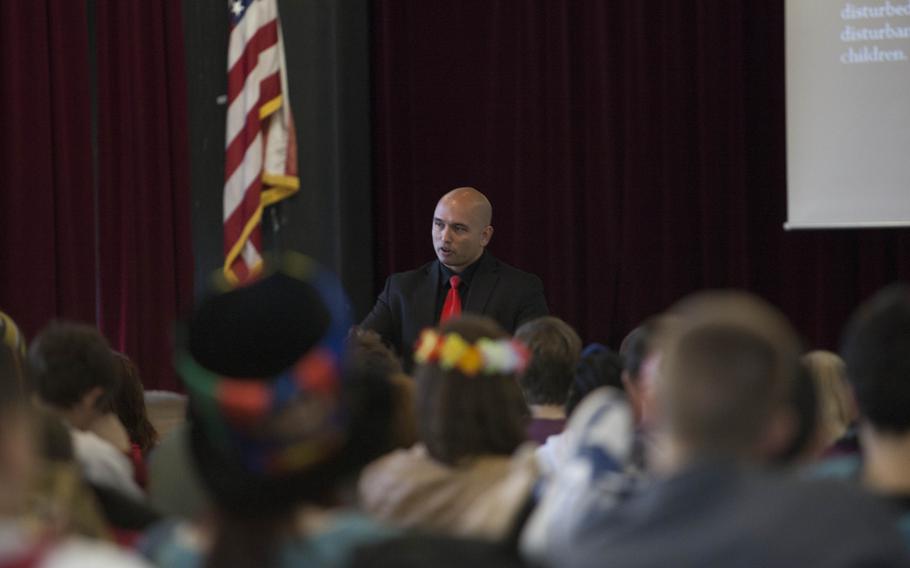 Buy Photo
Ronald Wiesner, a special investigator specializing in sex crimes investigations for the Kaiserslautern office of the Army's Criminal Investigation Command, speaks with teens Wednesday at Kaiserslautern High School during a presentation he developed to inform students about sexual assault and sexual abuse. (Matt Millham/Stars and Stripes)

KAISERSLAUTERN, Germany — Most freshmen at Kaiserslautern High School know what Pokemon cards are. That, says an Army special agent who investigates sex crimes, disturbs him.

While 10 years ago Pokemon cards were an innocuous craze among younger children, these days, the term has a more sinister meaning.

Teens are pasting sexually explicit images of their classmates on the cards and trading them among their peers, just as their parents or grandparents might have traded baseball cards.

“I found this out from a high schooler,” Ronald Wiesner, a special agent for the Army’s Criminal Investigation Command in Kaiserslautern, told an auditorium of teens Wednesday.

Wiesner was at Kaiserslautern High as part of a public health event designed to improve awareness about various issues affecting today’s youth, including depression and bullying. His presentation, titled “Breaking Chains,” focused on sex crimes against children, which are alarmingly common but rarely acknowledged or talked about, according to Wiesner.

He used the pokemon cards as an example of how teens exploit each other. However, most of his presentation was focused on assault and abuse.

By the age of 16, one in four girls and one in six boys will be sexually assaulted in the U.S., Wiesner said, citing statistics from a national crime database. “Anybody in this room could be a victim of sexual assault,” he told the students.

School psychologist Kirstin Kone said the number of assaults against children are like an iceberg; even those looking at the problem are only seeing a fraction of what’s out there.

“There’s more than anybody wants to imagine,” she said.

Wiesner’s presentation of the same program at the school last year led to a number of sexual abuse and assault victims coming forward, he said. Those victims were able to get medical treatment and counseling. A handful of the reports led to cases that could be prosecuted, he said.

One of those cases recently resulted in a court martial conviction, according to officials.

But generating investigative leads is not a goal of “Breaking Chains,” Wiesner said. The program partly draws from his youth, growing up in a home wracked by drugs and abuse. He was able to break out of that environment, he said, while his brother continued down a more destructive path.

Sexual assault tends to run in families, both Kone and Wiesner said. Children of abusers often turn out to be abusers themselves, and victims often have children who turn out to be victims.

But intervention by friends and peers can help break the cycle, according to Wiesner, who credits his high school sweetheart — now his wife — with helping turn his life around.

“I call her my desert rose,” he said.

Part of breaking the cycle of sexual abuse is explaining what sexual abuse and assault are, Wiesner said, because victims don’t always know they’ve been abused, and sometimes abusers don’t know they’re being abusive.

In one video in his presentation, a victim of childhood repeated sexual abuse recounted that she just assumed that all men forced themselves on girls.

A handful of students either excused themselves from the auditorium or appeared to tune out during that particular clip, Wiesner said, suggesting to him that there were victims of sexual abuse in the audience.

By talking to students, he hopes victims seek help, “and we might be able to even help out the family members, as well.”