Chusok around the corner 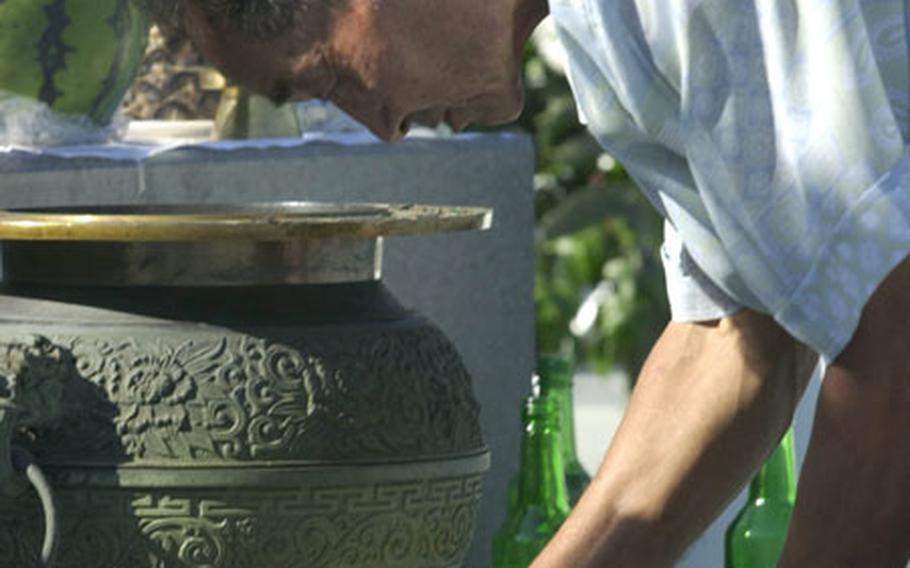 A man pours soju — a traditional Korean alcohol — before a monument honoring relatives still in North Korea on Chusok in September 2002. He was at Imjingak just shy of the North Korean border. Most Koreans travel to their hometowns during the three-day holiday — in effect, five days this year because it falls near the weekend — to visit relatives. (Jeremy Kirk / S&S)

SEOUL &#8212; Harvest, gratitude, family reunion and relaxation: These are the key words describing South Korea&#8217;s Chusok, just as they may bring to mind American Thanksgiving.

And just like Thanksgiving, Chusok has come to mean jammed streets and long drives to Grandmother&#8217;s house. But instead of feasting on turkey, South Koreans eat half-moon shaped rice cakes called songpyon.

Chusok itself falls on Thursday &#8212; which, on the lunar calendar, is Aug. 15. But the Chusok holiday, perhaps South Korea&#8217;s biggest traditional holiday period, begins Wednesday and runs, unofficially, through the weekend.

On Thursday, many South Koreans will get up early, dress in new clothes and prepare to hold a family ceremony called charae, setting out food they have spent several days preparing.

During Chusok, South Koreans pay tribute to their ancestors&#8217; love and guidance. They bow to honor the harvest and their ancestors. Then they feast.

South Koreans consider this the year&#8217;s most abundant time, falling during the traditional harvest season. The charae table is filled with almost every kind of food imaginable &#8212; beef, chicken, fish, fruit, vegetables and songpyon, the rice cakes. But you won&#8217;t see kimchi, usually a Korean staple three meals a day. Ritual decrees that pepper powder and garlic, two key kimchi ingredients, are not allowed in charae dishes.

After completing charae, Koreans visit their ancestors&#8217; graves, bowing and leaving some of the food from the feast.

&#8220;It&#8217;s extremely difficult to anticipate when is going to be the worst, but if possible, inter-city travels better be avoided during the whole five-day holiday,&#8221; Lee said.

During the holiday period, public offices, private companies and banks off base will be closed. But most shopping malls, grocery stores, movie theaters and other entertainment facilities are to be closed Thursday only.

The 63 Building, Seoul&#8217;s highest skyscraper, is to host a special Chusok event Wednesday through Friday. Sixteen telescopes will be provided to view the full moon and Seoul&#8217;s night skyline from an observation deck. And two penguins wearing hanbok &#8212; traditional Korean clothes &#8212; will welcome guests at the aquarium&#8217;s entrance.

The 63 Building is near the Taebang Station on subway line 1, just two stops from Yongsan station. Take exit 6 and walk, or a 63 Building shuttle bus will provide rides from the station.