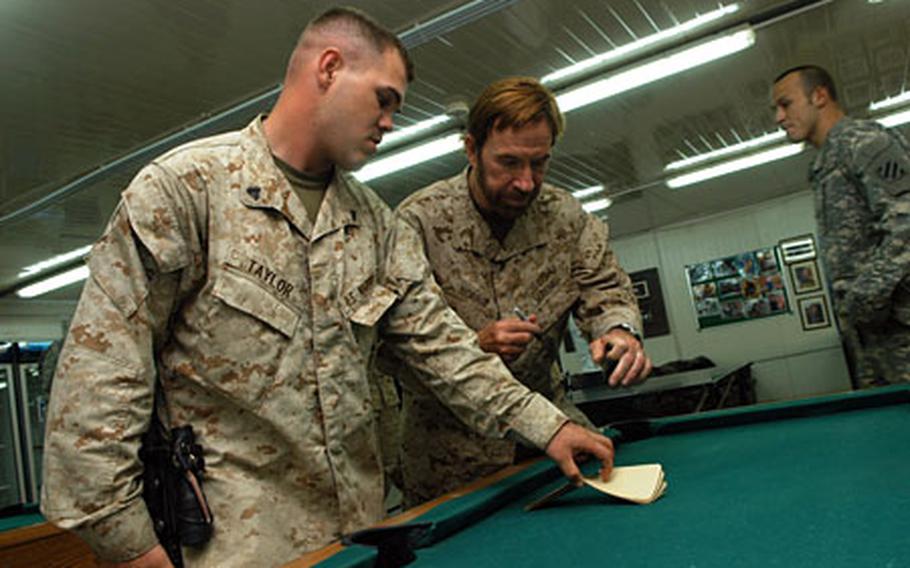 Cpl. Donald Taylor, 24, of Greenville, S.C., got some martial-arts information and a writing sample from the master himself when Chuck Norris came to Camp Blue Diamond on Friday. (Allison Batdorff / S&S)

Cpl. Donald Taylor, 24, of Greenville, S.C., got some martial-arts information and a writing sample from the master himself when Chuck Norris came to Camp Blue Diamond on Friday. (Allison Batdorff / S&S) 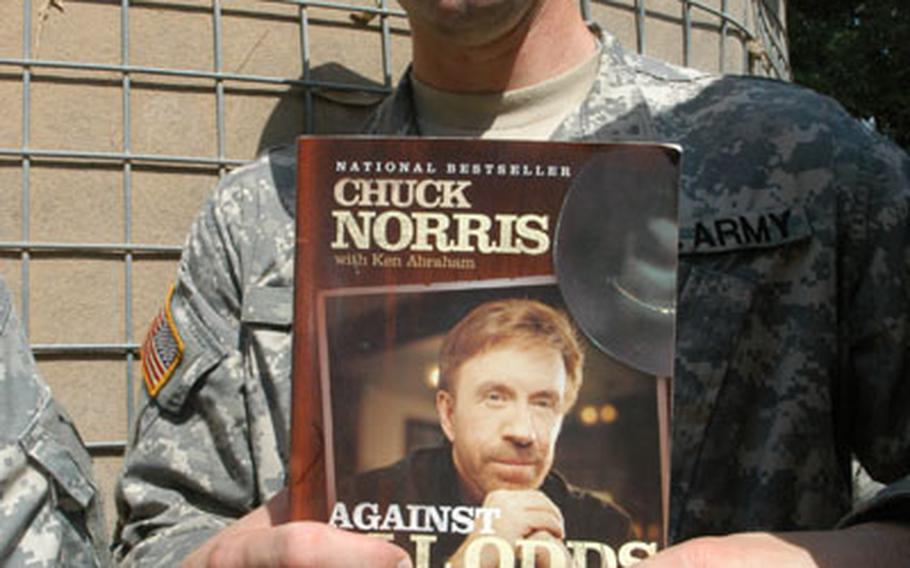 CAMP BLUE DIAMOND, Iraq &#8212; There is no theory of evolution. Just a list of animals Chuck Norris allows to live.

A chance to shake hands with the soft-spoken 67-year-old inspired hundreds of troops from Camp Blue Diamond and surrounding areas to line up for a hot, sunny wait on Friday. He even drew more soldiers than a team of visiting professional cheerleaders at his last base visit, Norris said.

The star of the &#8220;Walker, Texas Ranger&#8221; TV series and numerous martial-arts films is visiting bases in Anbar province this month &#8212; organizers wouldn&#8217;t give specifics for security reasons &#8212; on his second trip downrange. He toured 11 bases last year.

&#8220;I came over to let the troops know that the folks back home appreciate and love them and pray for them every day to come home safe,&#8221; Norris said.

During the afternoon, he smiled for pictures and autographed countless items, including photographs, books, a government voucher and even boxing gloves.

Cpl. Charles Decatoire had Norris sign his uniform after making the trip with other 3rd Battalion, 7th Marines at Hurricane Point.

While many were martial-arts fans from way back, some waiting in line were new Norris devotees, brought into the fold by &#8220;Chuck Norris Facts&#8221; &#8212; a list of the superhuman qualities possessed by the toughest man alive. The Internet phenomenon has people worldwide contributing gems like:

n When the Boogeyman goes to sleep every night, he checks his closet for Chuck Norris.

The &#8220;facts&#8221; cropped up a few years ago and have found a happy haven in military culture. They are frequently inscribed in base toilets here to boost morale, servicemembers said.

Norris takes all the joking in stride.

Others, he added, are a little over the top.

But there are also some real facts about Norris that fans should know.

Norris fought and won the World Professional Middleweight Karate Championship in 1968 and held that title for six years before retiring undefeated, according to his Web site. He also became the first man in the Western Hemisphere to be an eighth-degree black belt grand master in tae kwon do.

Norris also is an offshore powerboat racer, a motivational speaker for Christian Ministries and a writer. But first and foremost, Norris is a humanitarian, his Web site said.

But please, troops, quit with the death grips, he asked.