Christmas spirit at the ‘Dusty Spoon’ 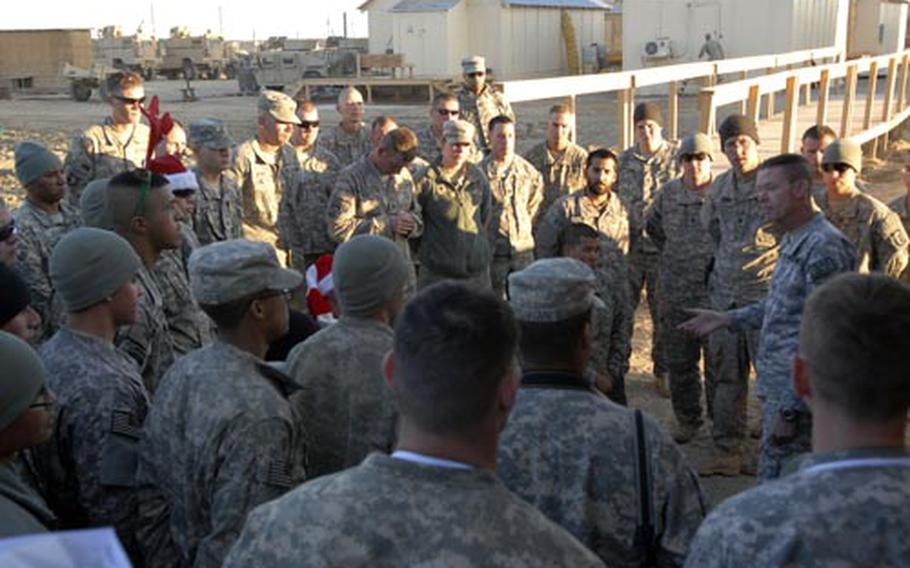 Maj. Gen. Jeffrey Schloesser, right, addressed troops at Combat Outpost Kushmand in southeastern Afghanistan on Christmas. Schloesser praised the troops&#39; work but warned them not to get complacent as their yearlong deployment begins to wind down. (Michael Gisick / S&S)

Maj. Gen. Jeffrey Schloesser, right, addressed troops at Combat Outpost Kushmand in southeastern Afghanistan on Christmas. Schloesser praised the troops&#39; work but warned them not to get complacent as their yearlong deployment begins to wind down. (Michael Gisick / S&S) 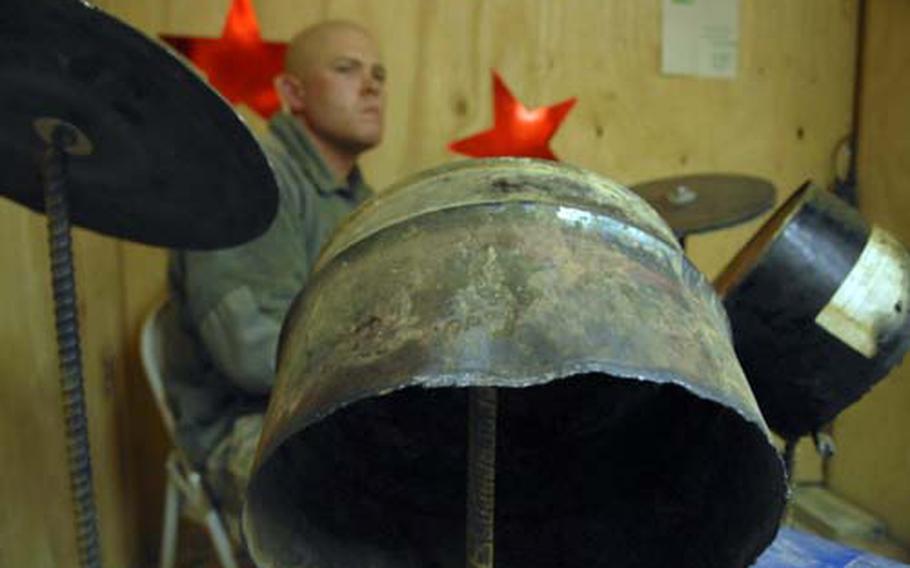 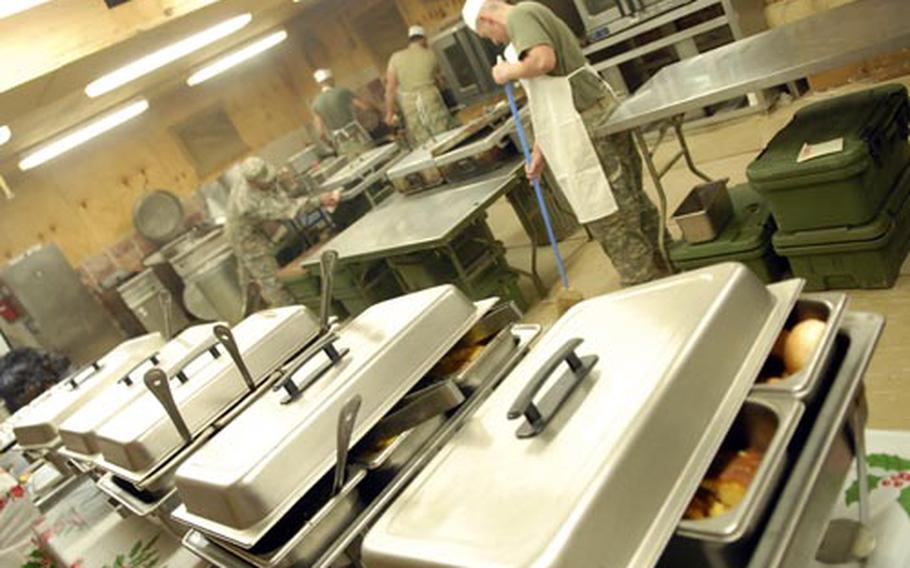 "Barack Obama got elected president," one boy had written to the troops. "I hope you guys soon get electricity. I like to watch wrestling."

Another declared, simply enough: "I wish for a utopia."

Combat Outpost Kushmand, a dusty base home to about 100 U.S. soldiers, probably doesn&#8217;t fit the bill. Near the southern tip of the U.S. presence in eastern Afghanistan and a punishing, days-long drive from the next closest base, it is not overwhelming in its amenities. Until a week ago, there was no water for showers or laundry.

Snow covered ridges are just visible in the far distance, but Kushmand is a capital of dust, a plywood town on a barren plain. It&#8217;s chow hall is known as the "Dusty Spoon," although some wit removed the "S" and the "n" from the sign.

Call it what you will, it&#8217;s a well-regarded place to eat, and the post&#8217;s six Army cooks worked for several days ahead of Christmas to uphold their reputation. Longer, actually.

"We don&#8217;t just cook stuff that comes in a bag," he said. "We cook real food. A lot of visitors tell us this place is better than those contractor chow halls."

Roast beef, steak and ham notwithstanding, as Christmas came and went the dusty outpost was still a long way from home. Nine-and-a-half time zones, by one measure. Seven-thousand and some miles, by another.

The post has no chapel. And, while a chaplain visited the base and performed a short service on Tuesday, there was no church on Christmas.

Far from families, many soldiers said they preferred not to make a big deal of the holiday.

Phillips, like most soldiers here a member of Company C, 1st Battalion, 506th Infantry Regiment, 101st Airborne Division, said this was his third Christmas deployed. Spc. Rodney Harmon, who celebrated his 24th birthday on Christmas Day, said he&#8217;d been away from home four of the last five holiday seasons.

Sgt. James Kendall, who re-enlisted in a Santa hat, was on his third. But unlike some, he gave the holiday spirit a go.

If, for some, Christmas was just another day, it was at least another day closer to the end of a long deployment.

During a brief visit by helicopter, the commander of U.S. forces in the east, Maj. Gen. Jeffrey Schloesser, brought that up. "How many days until you head to the house?" he asked a group of assembled soldiers. "Anybody counting?"

Schloesser laughed. In a more serious moment, he had warned against complacency as the yearlong deployment wound down, and praised the troops for their work.

Later, after the general and his entourage had flown off, an ad hoc band &#8212; a few infantrymen on guitar and a mechanic on drums &#8212; took to a corner of the "Dusty poo."

The mechanic, Spc. David Brasket, 25, of Vancouver, Wash., built the drums with scrap metal, some old oil drums and a garbage can during his lunch breaks. It took about two weeks. He tries to rock out twice a day, usually by himself.

"I&#8217;ve been through about eight pairs of drum sticks," he said. "I tried using metal ones because the wood ones break so much, but it didn&#8217;t sound right. So I just have to keep breaking sticks."