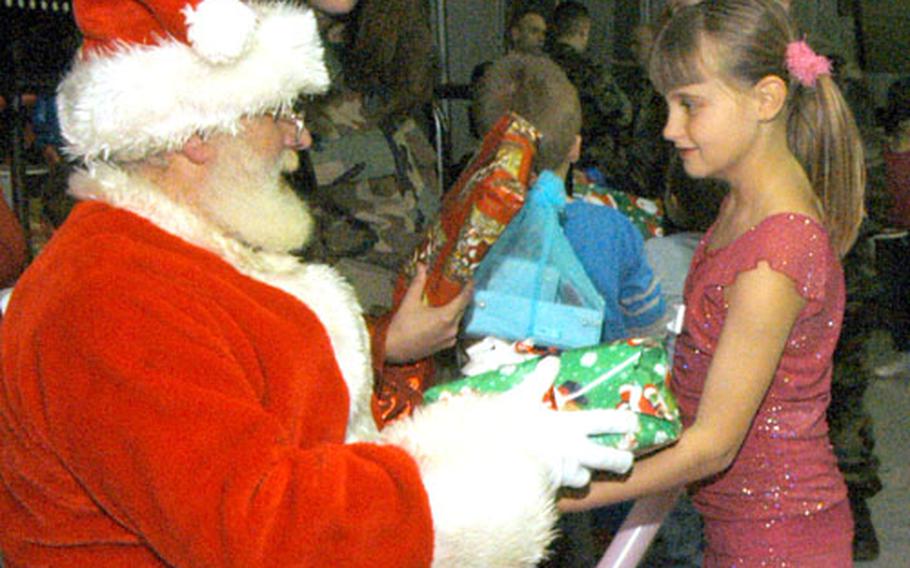 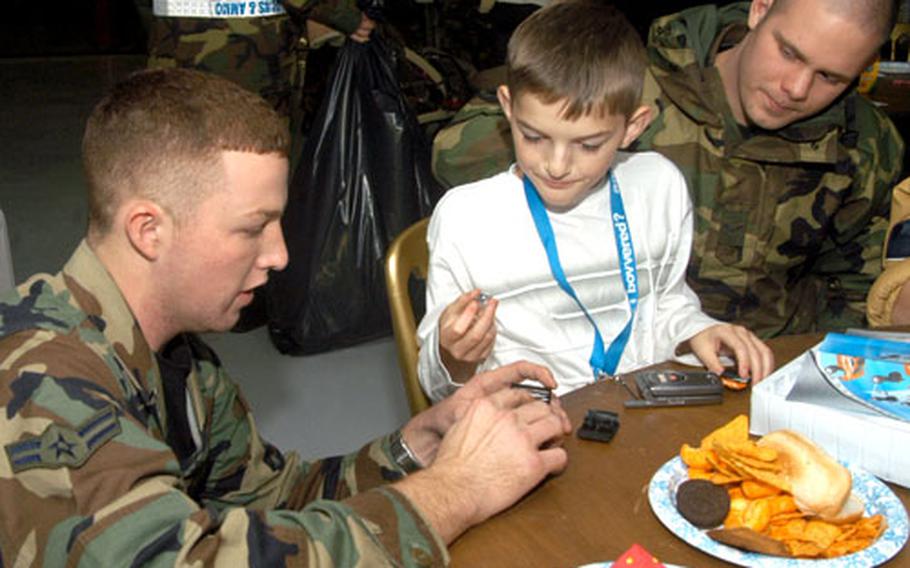 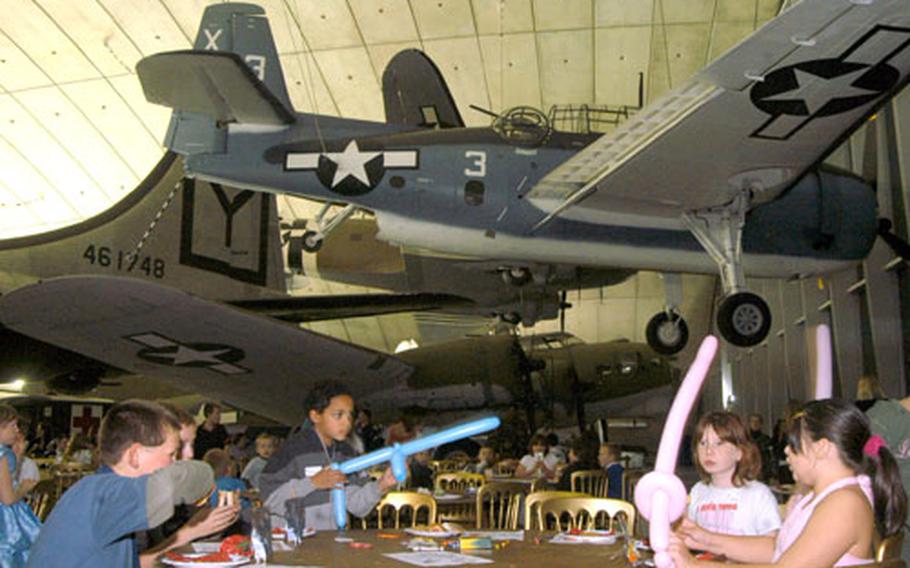 British children sit in the shadows of American aircraft of yesteryear during a Christmas party at the American Air Museum. (Sean Kimmons / S&S) 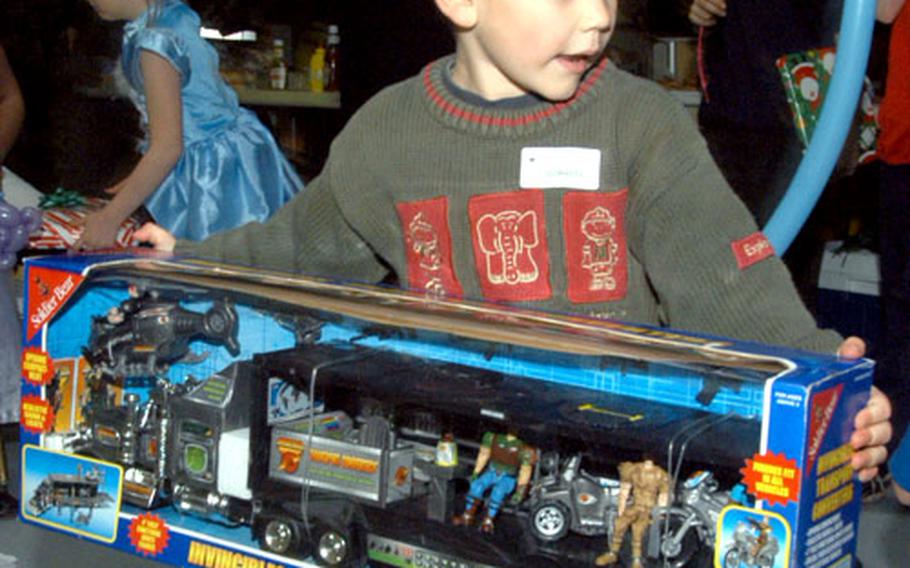 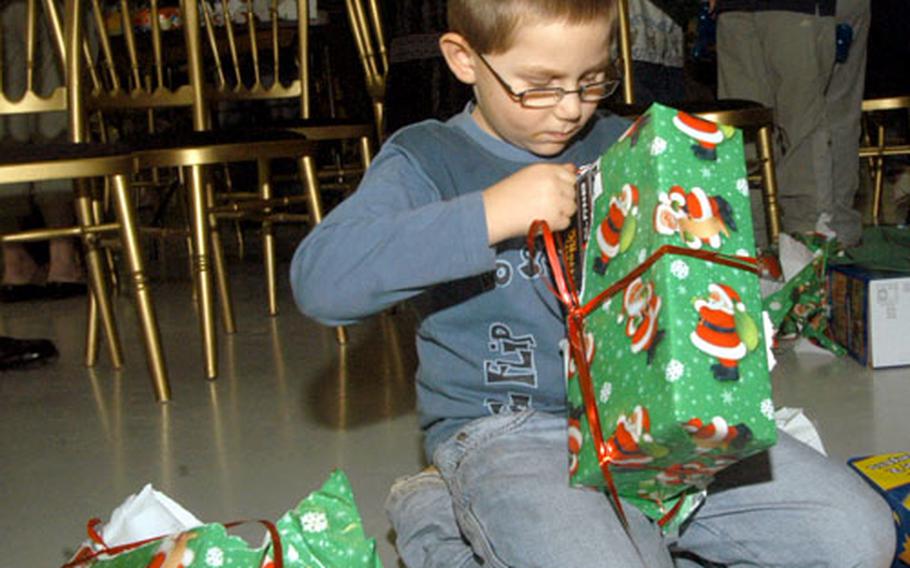 DUXFORD &#8212; A red fire engine slowly rolled to a stop in front of the American Air Museum, and a bearded man in a red suit climbed out.

&#8220;Santa!&#8221; yelled a few of the 70 children, anxiously waiting inside the glass-covered entrance of the museum, an exhibit at the Imperial War Museum Duxford near Cambridge.

The white-bearded Norman Killen, a British worker on RAF Lakenheath, entered the museum only to be swarmed by the thrilled children.

Positioned between American B-25J Mitchell and B-17G Flying Fortress bombers, the two-hour party included free food and drinks, balloons, face paintings and perhaps the biggest treat for the children, a gift handed to them by Santa.

Eight-year-old Daniel Ventress patiently sat in front of Santa as his friends received their gifts, which were donated by the two squadron communities on Lakenheath. Daniel&#8217;s was one of the last names to be called.

He quickly opened the car&#8217;s package at a nearby table where his friends gathered around him.

Skye Marsh, 8, paraded around the museum, filled with American aircraft of yesteryear, with her new My Little Pony gift.

About 25 airmen volunteered their time at the Tuesday night party and almost 50 helped out with the total effort, said Tech. Sgt. Jason Ray, a 48th Munitions Squadron airman who assisted in the coordination of the event.

Ray, who has a 5-year-old daughter, said the party was just for the kids.

&#8220;Anytime you can get kids together with other kids, it&#8217;s a great thing. Adults can be a little intimidating for them sometimes. These kids together are having a fun time socializing,&#8221; he said.

This was the second year in a row this sort of party was held at the Duxford museum. But according to Barbara Murfitt, who works at the Suffolk council, American airmen have provided donations to local children for at least 10 years.