Christmas in Japan: A different kind of holiday fun 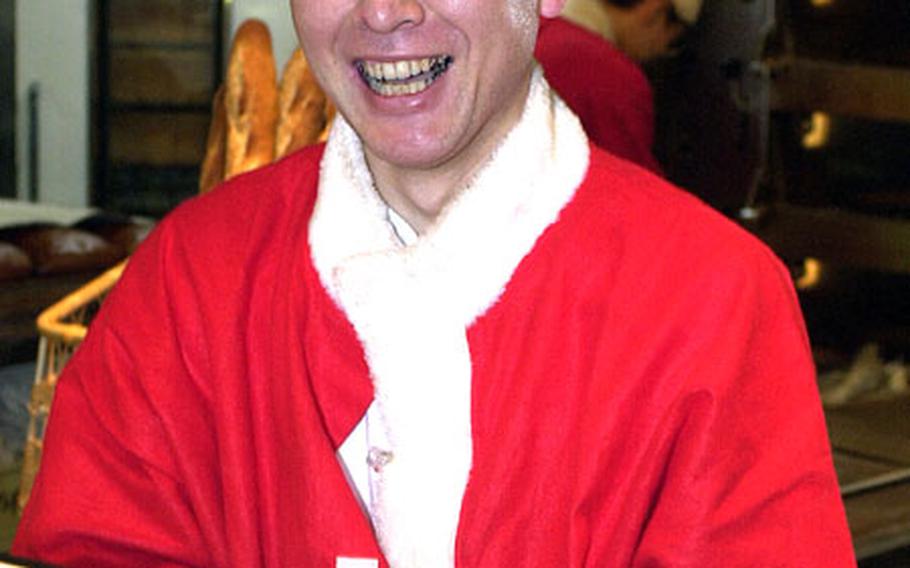 A clerk at a Tokyo bakery gets into the Christmas spirit. (Rick Chernitzer / S&S)

A clerk at a Tokyo bakery gets into the Christmas spirit. (Rick Chernitzer / S&S) Rie Tanaka, left, enjoys her meeting with Santa but her brother Gen has a little less fun at a Christmas event on Yokosuka Naval Base. The Tanaka family, like many in Japan, say they celebrate Christmas purely for the fun of giving gifts. (Joseph Giordono / S&S) While doubtful this pooch ever will replace Rudolph, his owner nevertheless garbed him in Santa gear for a walk through Tokyo&#39;s Roppongi neighborhood. (Rick Chernitzer / S&S)

A young Japanese lady in Sasebo recently described to an American friend how she and her family planned to spend the Christmas holiday.

&#8220;Oh, yes. Christmas. This will be the day when my family will enjoy special Christmas cake and Kentucky Fried Chicken,&#8221; she said. She was puzzled by her friend&#8217;s surprised reaction.

How Christmas is viewed in Japan greatly differs from the perspective of most Americans.

For the Japanese, the holiday is not the massive annual pinnacle of family togetherness, gift giving, charity and festivity it is for many Americans.

In Japan, Christmas has evolved into a day of fun, including gift giving and partying. Younger people celebrate Christmas at parties with their friends, or a romantic dinner with their boyfriends and girlfriends. Families with younger children put up Christmas trees and celebrate with dinner, cakes and gifts.

For Mari Demoto, a Sasebo native, Christmas is a time to spend with her husband, children and other family members, exchanging small gifts and eating together, probably chicken &#8212; maybe even Kentucky Fried Chicken.

&#8220;Well, in Japan we don&#8217;t have the turkey. Americans like to eat the turkey, but we eat the chicken. And there&#8217;s a Kentucky Fried Chicken close by and they make a special package for the Christmas fried chicken,&#8221; she added.

&#8220;If you ask what Christmas is in Japan, not many will be able to answer it correctly,&#8221; says Hidehiko Sekizawa, a researcher at Hakuhodo Institute of Life and Living. He also said the concept of Santa Claus has become very popular in Japan.

&#8220;Although we are not Christian, we put up a tree, eat a little more upscale dinner than usual with turkey or chicken and exchange gifts,&#8221; said Reiko Suzuki, who was taking photos of her child in front of a small Christmas tree in Tokyo.

&#8220;People are not particular about Christmas now,&#8221; Sekizawa said. &#8220;There are couples that go out on Christmas Eve and theme parks that have Christmas events, but compared to the past, it has declined.

&#8220;It&#8217;s not because of the economy, but instead of celebrating an extraordinary day such Christmas, they think being in touch through cell phones daily is more important. It&#8217;s the same with Valentine&#8217;s Day,&#8221; Sekizawa said.

Some Japanese were introduced to Christmas one traditional American way: through commercialism. Isao Tanaka, a Yokosuka resident who recently joined several other Yokosuka families for a base history tour, said he enjoys Christmas because &#8220;it means shopping.&#8221;

&#8220;I enjoy going to the stores, to see the decorations and the displays,&#8221; he said, while taking a bite from a chocolate chip cookie at the base&#8217;s Festival of Trees.

Meanwhile, his children were getting up close and personal with the commercial icon that has replaced the Christmas season&#8217;s namesake as its most identifiable symbol. Rie Tanaka clearly enjoyed having her picture taken while crouched on Santa&#8217;s lap; her younger brother, Gen, had a little less fun, screaming wildly until his father retrieved him from the unfamiliar lap of a red-suited Mrs. Claus.

In Tokyo, people were busy shopping last week, and some explained their views of Christmas.

&#8220;It is the most important event next to my birthday,&#8221; said college student Yuki Kikuchi.

&#8220;I look forward to the events and Christmas gifts such as accessories, and Christmastime-only gifts.&#8221;

Mutsuyo Ishimatsu, along with her husband, Kazuo Yamazaki, was in Tokyo&#8217;s Ginza shopping for Christmas gifts.

&#8220;I know that Christmas is the time to celebrate the Nativity, but it is like a fairy tale,&#8221; said Yamazaki. &#8220;Christmas is celebrated in Hollywood movies with Santa Claus. I can simply celebrate Christmas, which is an international event, compared to New Year&#8217;s Day, which seems to carry a nationalistic image.&#8221;

Some in Japan just prefer to stay home.

Christmas, she said, &#8220;is a time to be spent with your boyfriend or girlfriend, rather than with families.&#8221;

Others create their own traditions.