Christians in Basra subdued for holiday 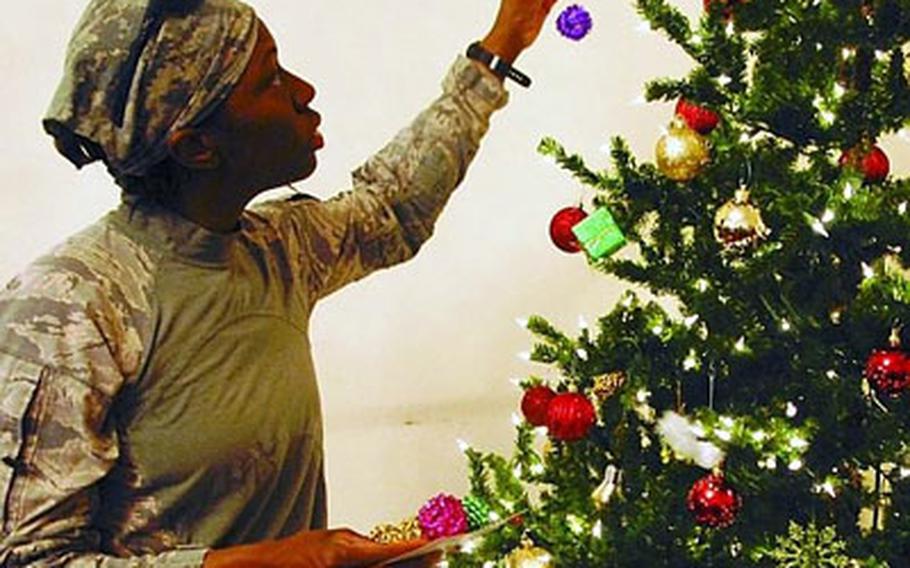 Air Force Tech. Sgt. Kimberly Waters hangs ornaments on a Christmas tree at the Chaldean Catholic Church in Basra, Iraq, on Dec. 5. Waters was to redeploy to the U.S. a few days later, but most of her colleagues will spend the holidays at their muddy base near the city’s airport. (Photos by Michael Gisick/Stars and Stripes)

Air Force Tech. Sgt. Kimberly Waters hangs ornaments on a Christmas tree at the Chaldean Catholic Church in Basra, Iraq, on Dec. 5. Waters was to redeploy to the U.S. a few days later, but most of her colleagues will spend the holidays at their muddy base near the city’s airport. (Photos by Michael Gisick/Stars and Stripes) 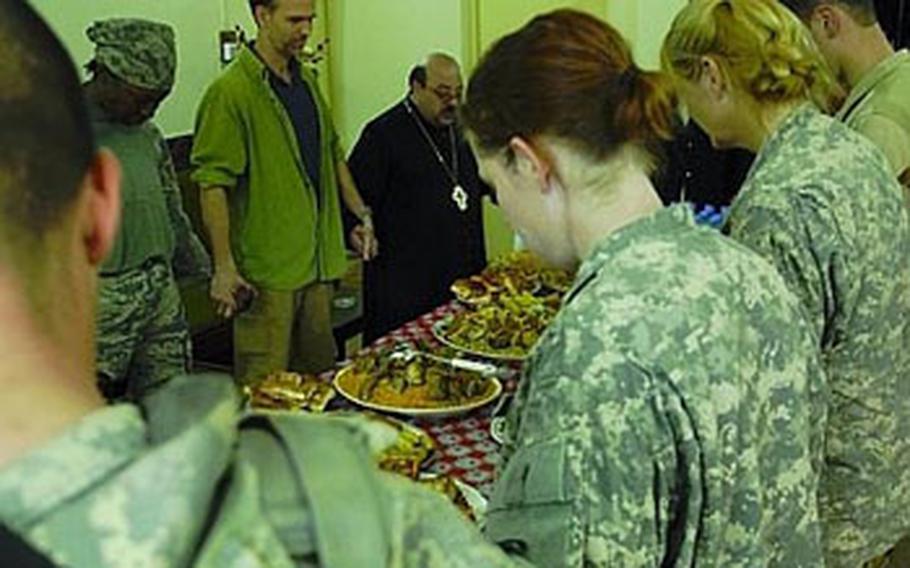 The Most Rev. Imad Aziz al-Banna, second from left, leads a prayer during a visit by U.S. troops to his church in downtown Basra. ()

BASRA, Iraq &#8212; The small group of American troops and Iraqi Catholics held hands around a table heaped with dishes of rice, chicken, lamb and pizza.

"Our Father," began the archbishop of Basra, the Most Rev. Imad Aziz al-Banna, before continuing the prayer in Aramaic, a version of the ancient language likely spoken by Jesus Christ.

In the next room at Basra&#8217;s Chaldean Catholic Church, a plastic Christmas tree twinkled amid graying photographs of old patriarchs and a newer shot of Pope Benedict XVI. Several of the Americans said while assembling and decorating the tree that it was likely the closest they would come to the Christmas spirit this year, far from home.

Christmas is likely to be a subdued affair for the dwindling Christian population of this once-cosmopolitan city. This year, the holiday falls amid the Shiite festival of Ashoura, when much of the city&#8217;s population will take to the streets to commemorate the martyrdom of the Prophet Muhammad&#8217;s grandson &#8212; many by ritually cutting themselves and whipping their backs with chains.

It is not the best time, in other words, for Santa Claus, though the Americans donated a Santa suit along with the tree. Al-Banna said he would hold a small Sunday school pageant a week early but otherwise restrict activities on Christmas Day to a quiet prayer service.

"We do not want to celebrate in their faces during this time when most of the people are mourning," he said.

If Christmas comes as Basra&#8217;s decidedly second most important holiday, it also arrives amid a tenuous sense of optimism is taking hold among the city&#8217;s remaining Christians after years of oppression.

Just 3,000 remain of the perhaps 20,000 Christians who lived in Basra before the U.S. invasion, reflecting a larger displacement of Iraqi Christians, who make up about 3 percent of the population. A November report by Human Rights Watch said roughly two-thirds of Christians in Iraq have fled their homes since 2003, either to Kurdish-controlled areas in the north or abroad. The Chaldean archbishop of Mosul, a traditional center of Iraqi Christendom, was abducted and murdered along with three companions early last year.

In Basra, Christians made up an important part of the city&#8217;s once-thriving merchant class. Their small numbers and lack of a security force made them vulnerable targets for kidnappings and extortion by the Shiite militias and criminal groups that took control of the city in 2007.

That year, al-Banna urged his parishioners not to celebrate Christmas after two Christians, a brother and sister, were murdered and left in a garbage dump.

Just five of the Christian families who fled have returned to the city since government forces reasserted control last year, al-Banna said, and 10 of the city&#8217;s 16 churches remain closed. But security has improved and the exodus has slowed.

"Now we don&#8217;t feel threatened like we did before," said Nassir Rafu, a deacon at Chaldean Catholic Church. "The Muslim people treat us well. The problem is that there are no jobs."

A ban on liquor sales, announced by the provincial government in September, rekindled fears among the Christians, who as elsewhere in Iraq own most of Basra&#8217;s liquor stores. Besides being an important source of income for a community that says it faces discrimination in finding government jobs, many see tolerance for alcohol &#8212; taboo under Islam but tolerated under Saddam Hussein &#8212; as a bellweather of their place as a minority in Iraq.

But the ban was rescinded earlier this month and appears never to have been seriously enforced.

Raed Said Bahnam, who owns a liquor store in the city, said two council members had visited him to announce the ban but never gave him official paperwork, and an Iraqi general later told him to forget about it and remain open, which he did.

"Business is very good," he said, adding that he planned to apply for a permit to open a bar next year. "Whether they are Christian or Muslim, 99 percent of Basra needs a drink."

Others said they hoped the development of the oil fields surrounding the city would provide more diverse employment opportunities and, perhaps, lure back some of those who have fled. But few really expect that to happen.

"It&#8217;s been a long time now and most of them have sold their property and found another country," said Rafu, the deacon. "As for me, I cannot leave, because this is my church, and I have to stay here."

Inside, the archbishop produced a few bottles of Communion wine. But the Americans, barred by military regulations from drinking alcohol in Iraq, were having a restrained holiday. They drank tea.