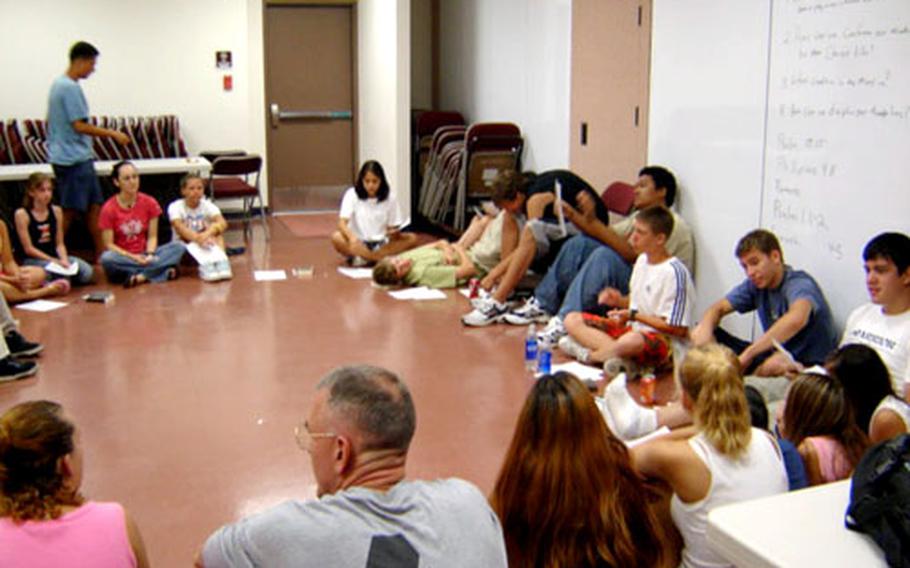 Teen-oriented Christian discussion groups like this one held this summer at Camp Walker in Daegu, South Korea, will be a regular part of a new program called Club Beyond that began operating at Camp Walker last month. (Julie Coy / U.S. Army)

PYEONGTAEK, South Korea &#8212; A Christian youth ministry that focuses on military teens and their unique situation is now operating at the Army&#8217;s Camp Walker in Daegu, South Korea.

Club Beyond is part of the nonprofit Military Community Youth Ministries, or MCYM, which has more than 65 full-time staff working in various countries, including South Korea, Germany, the United Kingdom and Italy.

Club Beyond began operating full-time from an office at the Camp Walker Chapel in August under contract with the Army&#8217;s Area IV Support Activity. Area IV, in southeastern South Korea, includes camps Walker, Henry and George in Daegu, Camp Carroll in Waegwan and Camp Hialeah in Busan.

&#8220;The purpose of the program is to provide a ministry to military teens that recognizes those unique situations that they have to deal with,&#8221; said Julie Coy, MCYM community director in Daegu. &#8220;They can be frequently uprooted from different settings and move to a completely different country or culture and try to make new friends, try to learn a new language.&#8221;

The program&#8217;s activities are open to teens of any or no religious faith or affiliation, Coy said.

While it emphasizes biblical Christian basics, it steers clear of doctrinal matters that may vary from one denomination or another, Coy said.

&#8220;We just focus on Christianity, providing the teens with a foundation to move forward.&#8221;

At a Sunday group discussion planned for December &#8220;we will be talking about dealing with stress, depression and loneliness,&#8221; said Coy, all issues that emerged during discussion at a recent lock-in.

Lock-ins are overnight events where teens agree beforehand to stay the entire night. Volleyball and other sports, snacks and group discussions are typical lock-in features.

Club Beyond also offers two weekly Bible studies, one a large group study that meets Sundays from 4 to 6 p.m. at the Camp Walker Chapel.

A small-group study meets Tuesdays from 3 to 4 p.m. at the Camp George Community Center.

Also planned are two retreats each year and an overseas mission trip.