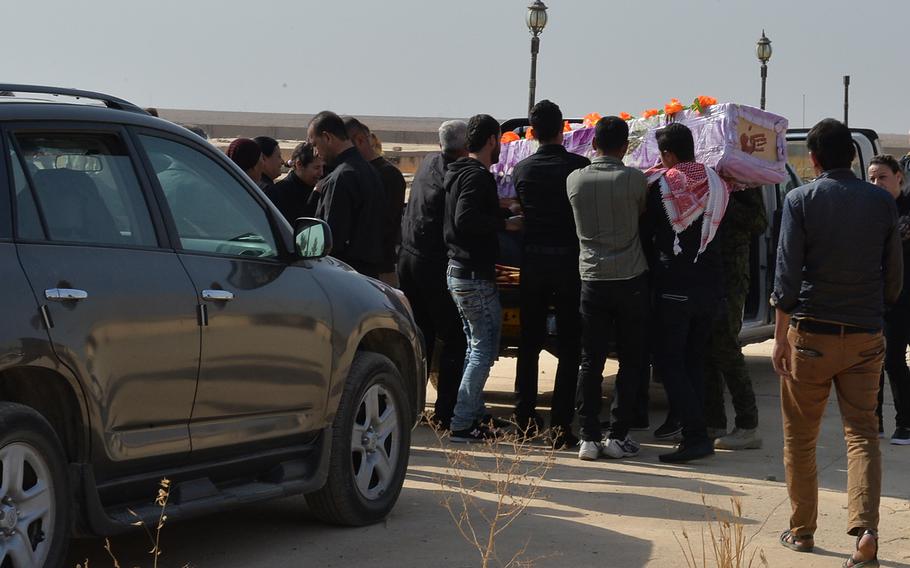 Buy Photo
Pall bearers carry the casket of Hadiya Qreo Yohanna at a church cemetery on the edge of the Christian town of Qaraqosh, Iraq, on Nov. 14, 2016. Yohanna fled the town in 2014 as the Islamic State group swept in and died in Irbil in early November. (Chad Garland/Stars and Stripes)

Buy Photo
Pall bearers carry the casket of Hadiya Qreo Yohanna at a church cemetery on the edge of the Christian town of Qaraqosh, Iraq, on Nov. 14, 2016. Yohanna fled the town in 2014 as the Islamic State group swept in and died in Irbil in early November. (Chad Garland/Stars and Stripes) Buy Photo
A woman weeps at the tomb of Hadiya Qreo Yohanna in a cemetery near the recently liberated Christian town of Qaraqosh, Iraq, on Nov. 14, 2016. Yohanna fled the town in 2014 as the Islamic State group swept in had asked to be buried in her home village. (Chad Garland/Stars and Stripes) Buy Photo
Men walk through the vandalized crypts of Christians at a cemetery on the edge of the recently liberated town of Qaraqosh, Iraq on Nov. 14, 2016. Christian residents fled when Islamic State swept in in 2014 and some returned in October as part of the force to liberate the village. (Chad Garland/Stars and Stripes) Buy Photo
Christian militiamen drive past a home used by Islamic State fighters in the recently liberated town of Qaraqosh, Iraq on Nov. 14, 2016. Christian residents of the town fled when militants occupied it in 2014 (Chad Garland/Stars and Stripes) 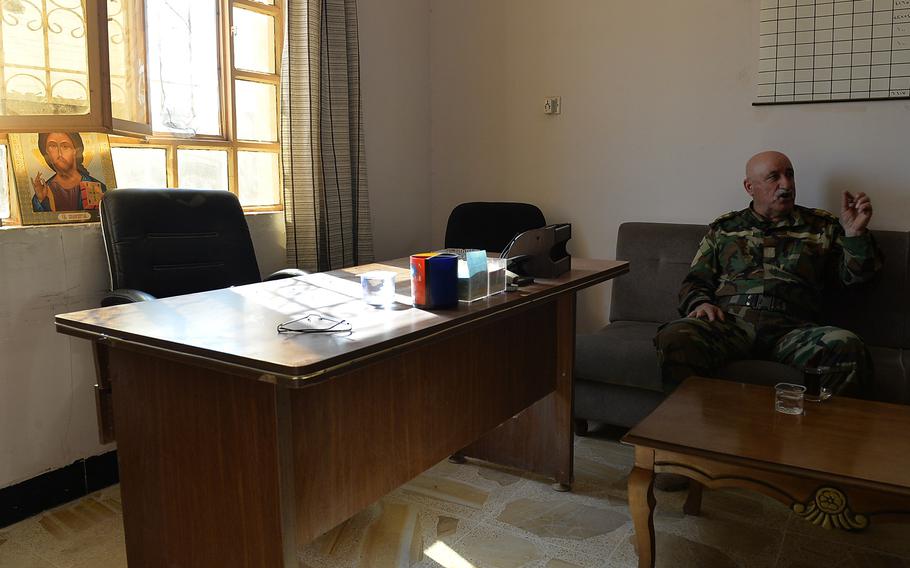 Buy Photo
Mubarak Toaya, assistant commander of the Christian militia group Nineveh Plain Protection Units, in his office at a makeshift base for the anti-Islamic State fighters in the Christian town of Qaraqosh, Iraq, on Nov. 14, 2016. (Chad Garland/Stars and Stripes) Buy Photo
Nineveh Plain Protection Units fighters warm their hands at a barrel fire near a command post for the Christian militia in Qaraqosh, Iraq, on Saturday, Dec.17, 2016. (Chad Garland/Stars and Stripes) 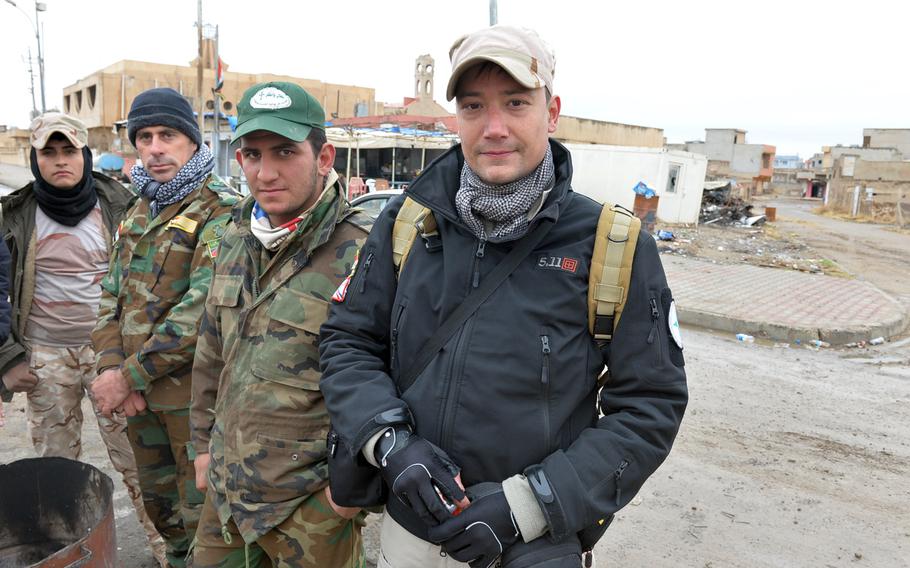 Buy Photo
Benoit Kanabus, seen here with members of the Nineveh Plain Protection Units in Qaraqosh, Iraq, on Saturday, Dec. 17, 2016, is a Belgian university professor who volunteered to join the Christian militia in September. (Chad Garland/Stars and Stripes) Buy Photo
An Islamic State group flag painted on the wall of a building in Qaraqosh, Iraq, on Saturday, Dec. 17, 2016, is painted over with the initials of the Nineveh Plain Protection Units, an Assyrian Christian militia. (Chad Garland/Stars and Stripes) 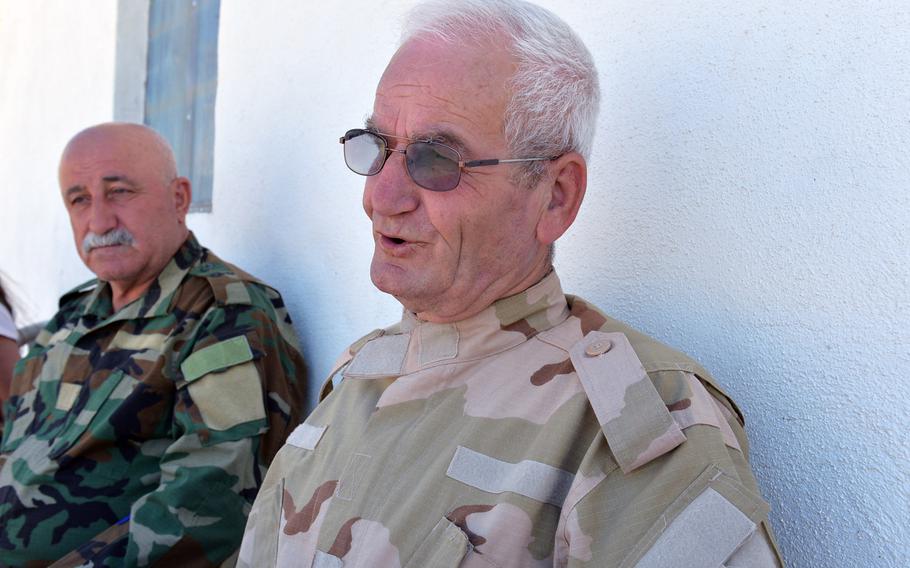 Buy Photo
Benham Aboush Almaseh, founder of the Assyrian Christian militia known as the Nineveh Plain Protection Units, is pictured here with his assistant commander, Mubarak Toaya, at a training camp for the group near the Christian village of Alqosh on Saturday, July 23, 2016. (Chad Garland/Stars and Stripes) 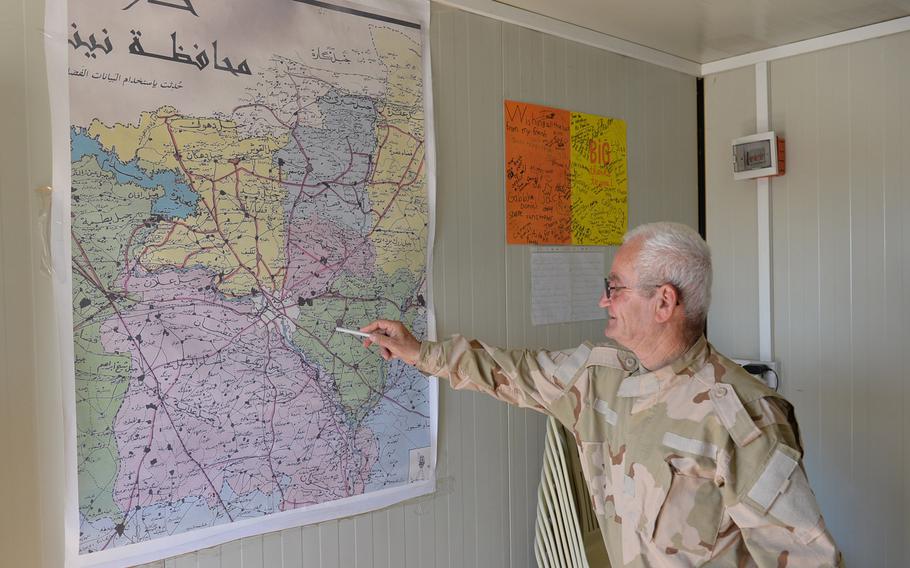 Buy Photo
Benham Aboush Almaseh, a former Iraqi army general, points at a map at a training camp for the Nineveh Plain Protection Units near the Christian village of Alqosh on Saturday, July 23, 2016. Almaseh founded the militia to help retake the area from the Islamic State. (Chad Garland/Stars and Stripes)

QARAQOSH, Iraq — By day, the Assyrian men patrol the edges of this largely empty town outside Mosul, known as the capital of Iraq’s Christian community before thousands of its residents were forced to flee advancing Islamic State fighters more than two years ago.

Nights, they stand watch at posts dotting the surrounding plains, hoping to prevent another such invasion.

Sometimes, members of the Nineveh Plain Protection Units, or NPU, drink 2-year-old stale beer they find in basements here, according to Benoit Kanabus, a Belgian professor who joined this Assyrian Christian militia.

The 500-member militia is one of many armed groups — Shiite, Sunni, Turkmen, Yazidi and Christian — supporting the Iraqi army-led anti-Islamic State campaign. As the independent paramilitary group has struggled for legitimacy over the past two years, it has often turned to the West for support, including U.S. training and equipment.

Now, with the Iraqi army moving further into Mosul, Kanabus said, the Christians are securing several outlying towns and providing rear security against lingering Islamic State fighters who have managed to infiltrate back into cleared areas and launch attacks.

The militia, made up largely of men forced from their homes in 2014, now has a presence in the towns of Qaraqosh, Karamlis, Bartella and Teleskof. It may remain active as a security force indefinitely, its leaders say.

“We want to protect us until the central government can protect us,” said Benham Aboush Almaseh, the group’s founder, in a recent phone interview.

When that will be is not clear. The 2-month-old offensive to oust Islamic State fighters from Mosul, the second-largest city and the group’s last major urban stronghold in the country, will likely grind on for months.

Mubarak Toaya, an NPU commander in Qaraqosh, said the militants had been pushed from the town, but now he’s more concerned about roving bands of criminals.

Christians who had visited their villages said their properties were stripped of valuables. One woman shouted at an Iraqi army general in Karamlis a few weeks ago, alleging the Iraqi troops — mostly Shiite — had stolen belongings from her home. Others blamed Muslim neighbors in surrounding towns they claim had collaborated with the militants.

Allegations like these, along with accusations that Shiite and Sunni militias have engaged in human rights abuses, add to a mix of recent and ancient sectarian grievances — divisions some experts believe could strain efforts to restore order long after the Islamic State group has been routed.

Once a significant minority in Iraq, Christians have dwindled in numbers in recent years, from some 1.5 million a little more than a decade ago to fewer than 300,000. Many have emigrated since 2003 to escape discrimination and violence.

Frustrated with Iraqi and Kurdish forces for failing to protect Christian areas as the Islamic State group swept into the country, Almaseh, a white-haired former Iraqi army general and Iran-Iraq War veteran, founded the militia in 2014 in hope of retaking and defending the historic settlements in northern Iraq. Like thousands of others, he had been forced to flee to Iraq’s Kurdish region that summer.

At home, he’s got the backing of the Assyrian Democratic Movement, a political party established decades ago to resist Saddam Hussein’s Baathist regime. Almaseh has also received thousands in financial support from the U.S. and Europe — mostly members of the Assyrian diaspora, he said.

At about the same time, U.S. special operations troops were training NPU men, Almaseh said at the group’s Alqosh camp this summer, and in May, the militia fought Islamic State attackers in the town of Teleskof. During that battle, Navy SEAL Petty Officer 1st Class Charles Keating IV was killed.

U.S. officials would not confirm whether they had trained NPU members but have said training in rule of law, marksmanship and first aid has been conducted with groups in several areas to enable local leaders to secure their territories.

NPU has received backing from Baghdad, including stipends of about $400 a month since spring, as well as AK-47 rifles, PKM machine guns and ammunition.

Still, when the battle for Qaraqosh kicked off in late October, days into the Mosul campaign, Iraqi army leaders hesitated to put NPU fighters in the direct line of fire, fearing they lacked sufficient training and equipment, said Iraqi army Gen. Shaker Kazem Mohsen, of the 9th Armored Division.

Instead, they relegated them to rear guard when the battle began on Oct. 19. It wasn’t until days later that the army brought the militia in to help secure the town from roughly 200 remaining militants, officials said.

Though the town was considered liberated on Oct. 22, a small number of militants continued to resist for days afterward. Kanabus, the Belgian academic, said NPU members had helped secure the town by clearing enemy-built underground passageways, like the “tunnel rats” of the Vietnam War.

It’s not yet habitable, but it was secure enough on Nov. 14 to lay Hadiya Qreo Yohanna, 90, to rest. Like many in 2014, she had fled to the Kurdish city of Irbil, but only after she died there could she be brought home.