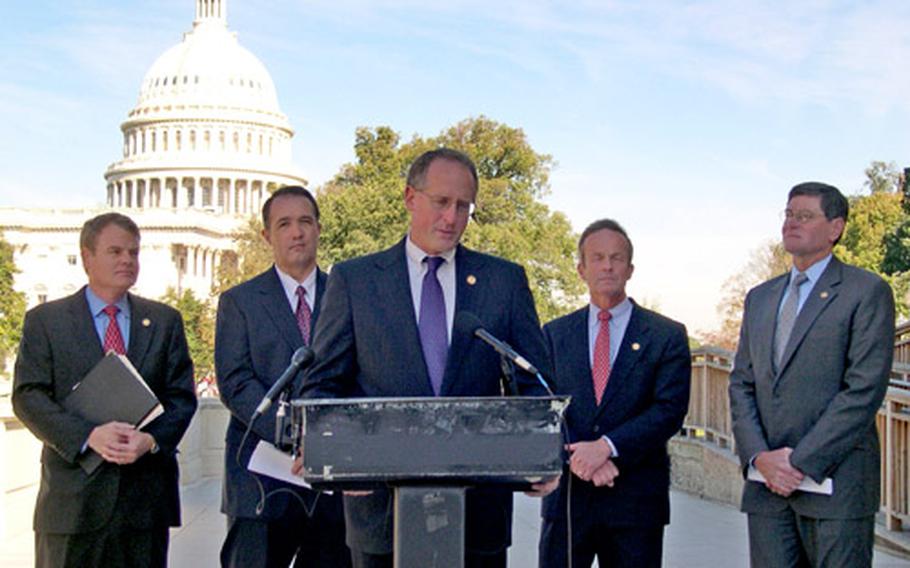 WASHINGTON &#8212; A group of Christian congressmen want a presidential order protecting military chaplains after receiving anecdotal evidence that the religious personnel have been punished for using overtly Christian language in public settings.

Rep. Walter Jones, R-N.C., said he has received letters from chaplains, both stateside and deployed overseas, complaining that superior officers have criticized and even reprimanded them for using Bible verses and invoking the name of Jesus in memorial services, pre-mission remarks and other events outside of their religious services.

Jones was joined Wednesday by five of the 35 House members who have agreed to sign a letter to President Bush asking for an executive order protecting &#8220;the constitutional right of military chaplains to pray according to their faith.&#8221; One senator, Sen. James Inhofe, R-Okla., has also pledged his support.

At issue are proposed guidelines introduced by the Air Force in August that emphasize nondenominational prayers in military ceremonies, and similar warnings from the Defense Department to all chaplains not to &#8220;transform such non-faith-specific observances to reflect the chaplain&#8217;s denominational commitment.&#8221;

Pentagon spokeswoman Lt. Col. Ellen Krenke said the goal of the educational efforts is to &#8220;encourage all members of the Armed Forces to respect the religious views and practices of all members.&#8221;

The Air Force regulations were released after an investigation into religious intimidation by Christian cadets at the service&#8217;s academy last spring.

Jones said he believes those guidelines will form the basis of a new militarywide code of conduct, and said that already, chaplains in all services are feeling pressure to watch their words.

Rep. Todd Akin, R-Mo., called the restrictions a &#8220;nasty form of political correctness&#8221; that keeps the chaplains from truly performing their jobs.

The letter calls the requirement of nondenominational prayers &#8220;a euphemism declaring that prayers will be acceptable only so long as they censor Christian beliefs.&#8221;

Jones did not release the names of the other members who will co-sign the letter, but he said that information will be made public by the end of the week.

Excerpts from the Air Force&#8217;s interim guidance on free exercise of religion

1. Public prayer should not usually be included in official settings such as staff meetings, office meetings, classes or officially sanctioned activities such as sports events or practice sessions.

2. Common sense &#8212; and mutual respect &#8212; should always be applied and extraordinary circumstances may drive exceptions.

3. Consistent with long-standing military tradition, a brief nonsectarian prayer may be included in nonroutine military ceremonies or events of special importance, such as changes of command, promotion ceremonies or significant celebrations where the purpose of the prayer is to add a heightened sense of seriousness or solemnity, not to advance specific religious beliefs. Military chaplains are trained to deal with such events.

4. In addition, a moment of silence for personal reflection does not require the same considerations as public prayer and may be appropriate in official settings.