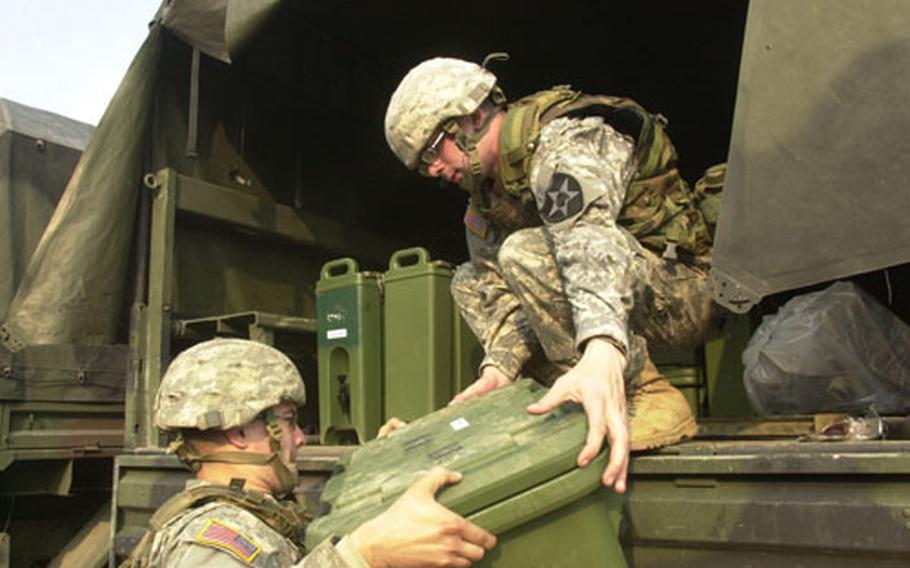 RODRIGUEZ RANGE, South Korea &#8212; During past battle exercises, Capt. Alex Robinson and his senior noncommissioned officers had to factor in hours of supply issues while keeping their eye on the fight.

This week, Charlie Battery&#8217;s Robinson and other commanders within the 2nd Infantry Division&#8217;s 6th Battalion, 37th Field Artillery, didn&#8217;t have to give fuel and provisions much more than a passing thought.

At their 10-day live-fire exercise, the battalion is demonstrating its &#8220;proof of concept&#8221; on a centralized supply-delivery system, combining the battalion&#8217;s artillery soldiers with the logisticians of the 70th Brigade Support Battalion, formerly the 702nd.

At first, commanders said they had their doubts about giving up a piece of control and testing the unknown.

Now, Robinson and others say they are believers.

&#8220;First sergeants no longer have to operate at night, driving with other soldiers to pick up supplies at what can be a faraway depot, depending on the scenario locations.

&#8220;That can be a total of six to eight hours of going back and forth, picking up chow,&#8221; said Robinson, of College Park, Md. &#8220;The first sergeant can go back to helping the commander and assisting the platoon sergeant, making sure training is done the way it&#8217;s supposed to be done.&#8221;

The logistics operations center at Rodriguez Range is pushing supplies out this week to many elements, from air defense artillery and rocket crews to observers and the opposing forces, all scattered throughout a wide swath of northern Gyeonggi province.

The new setup has logistics soldiers figuring out the most efficient way to move supplies, while working with the artillerymen to keep the scenario realistic.

Even simple things like eating become &#8220;tactical chow,&#8221; with soldiers getting food in small groups, spaced apart from each other in the event of attack, Lambright said.

The system is also relying on a new radio with multiple settings that penetrate the province&#8217;s mountainous terrain, officials said.

There would be few changes to the system in combat, said logistics officer 1st Lt. William McDustell, of Greenville, N.C.

Instead of delivering to groups of fewer than 75 soldiers, they&#8217;d probably have those soldiers pick up supplies at a larger area, McDustell said. The drivers would be able to travel faster than the exercise speed limits and South Korean soldiers would likely be pulling security alongside the U.S. trucks.