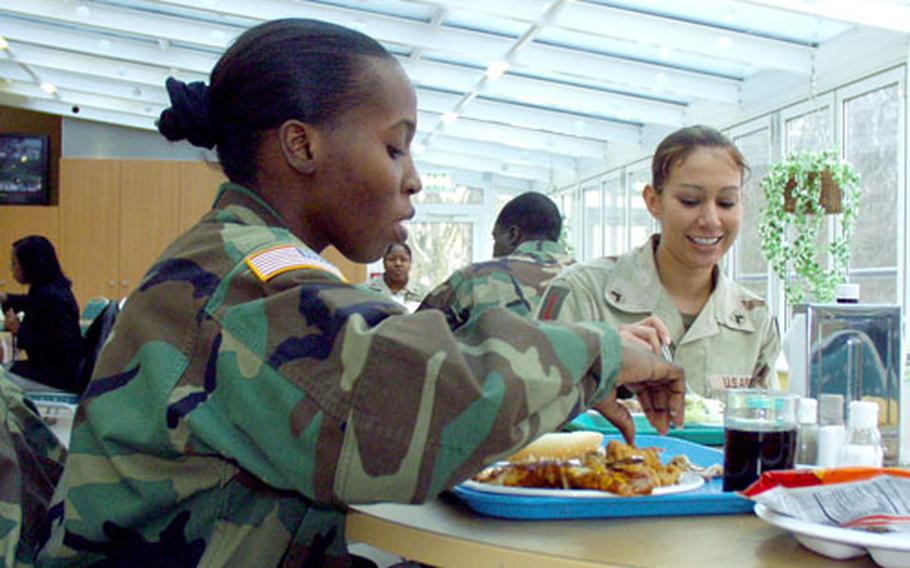 W&#252;RZBURG, Germany &#8212; Before the 1st Infantry Division began its trip home from Iraq, Spc. Sharon Williams avoided eating in military chow halls like the one at its W&#252;rzburg headquarters.

That&#8217;s all changed, now that the Army has opened its wallet to spiff up the Leighton Barracks dining hall.

Returning troops will see something different at every Big Red One chow hall. Base officials took advantage of the deployment and crammed all their future planned renovations into a single year.

&#8220;We accelerated [the building program] to get it done before the division came back,&#8221; said Lt. Col. Jeffrey Harrison, director of public works for the W&#252;rzburg-based 98th Area Support Group, which includes all 1st ID bases except Vilseck.

The upgrades include $200,000 to $250,000 projects such as painting, repairs and floor or roof improvements at Kitzingen and Bamberg, as well as full-scale, million-dollar-plus remodeling jobs at posts in Schweinfurt, Katterbach and W&#252;rzburg.

The Leighton Barracks face lift is typical. Staff Sgt. Bessie Pulley, the dining-hall manager, said it included a new central heating and air conditioning system that, it is hoped, will stop soldiers dining there from freezing in the winter and broiling in the summer.

Also new are customer-friendly serving areas, a sunroom and latrines accessible from indoors, plus brighter walls decorated with pictures.

The changes drew praise from newly returned soldiers &#8212; even those accustomed to the lavish spreads at the KBR-contract chow halls in Iraq. And although Pulley says the menu choices haven&#8217;t changed since before the deployment, the improved presentation has made many soldiers feel like the food has improved.