Choppers in Afghanistan vital and vulnerable 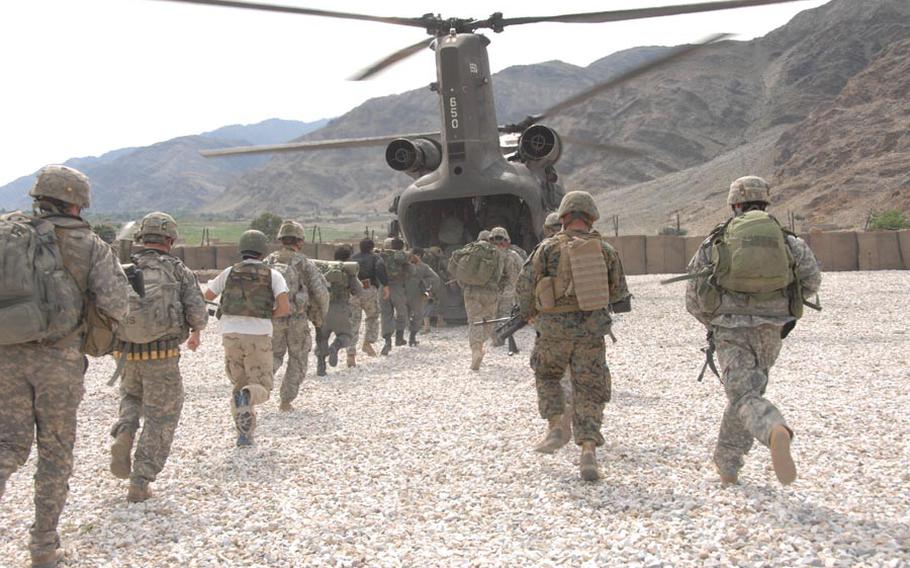 NAPLES, Italy &mdash; The downing Saturday of a Chinook transport helicopter in eastern Afghanistan that took the lives of 30 U.S. servicemembers and eight Afghans highlights both the importance and vulnerabilities of the choppers that fly troops and supplies over Afghanistan.

The Taliban claimed responsibility for downing the helicopter in the Tangi Valley in Wardak province, southwest of Kabul. NATO said an investigation into the crash was under way.

Helicopters like the Chinook, or the high-tech, radar-suppressing stealth choppers used in the May 2 raid into Pakistan that killed Osama bin Laden, showcase the tactical advantage that rotary-wing aircraft give Special Forces, who want to swoop in fast and hard on an insurgent target.

&ldquo;Quickness and mobility are two of the watchwords of special operations,&rdquo; Michael O&rsquo;Hanlon, a senior fellow and creator of the Afghanistan Index at the Brookings Institution think tank, said in an email Sunday.

But with this increased access comes increased danger and vulnerabilities. Chinooks can ferry large numbers of troops, but are relatively slow and vulnerable when they attempt to offload troops.

Saturday&rsquo;s fatal crash was the deadliest in the history of the Afghanistan War.

O&rsquo;Hanlon said the military will search for lessons learned from Saturday&rsquo;s crash, as they do with any such incident, but said the use of helicopters in Afghanistan is unlikely to change anytime soon.

&ldquo;Not to search for lessons would be a mistake and fly in the face of standard American military approaches,&rdquo; he said. &ldquo;That said, at a broad level, I don&rsquo;t expect too much change for all the reasons noted.&rdquo;

&ldquo;They&rsquo;ve always been a core, being able to insert and extract from areas that are otherwise inaccessible,&rdquo; said Larry Yatch, a former Navy SEAL, who now runs a private security company in Minnesota. &ldquo;The fact that we are relying on them so heavily, it&rsquo;s amazing that there aren&rsquo;t more incidents like this.&rdquo;

If more such attacks do occur against helicopters, that could force a change in tactics.

While insurgents have proved effective at utilizing more sophisticated weapons against troops on the ground, such as explosively formed penetrating roadside bombs, there hasn&rsquo;t been a corresponding evolution in how the enemy targets aircraft, said Jim Gavrilis, a security consultant and former Army Special Forces officer.

&ldquo;It&rsquo;s baffling,&rdquo; Gavrilis said. &ldquo;We haven&rsquo;t seen a large-scale strategy to take out helicopters. If they can get higher-powered IEDs, you&rsquo;d think they&rsquo;d get to the point where they want better rockets to fire at our aircraft.&rdquo;

If that happens, and helicopters more routinely get knocked out of the sky, tactical changes would be required, he said.

&ldquo;That would be a game changer,&rdquo; Gavrilis said.