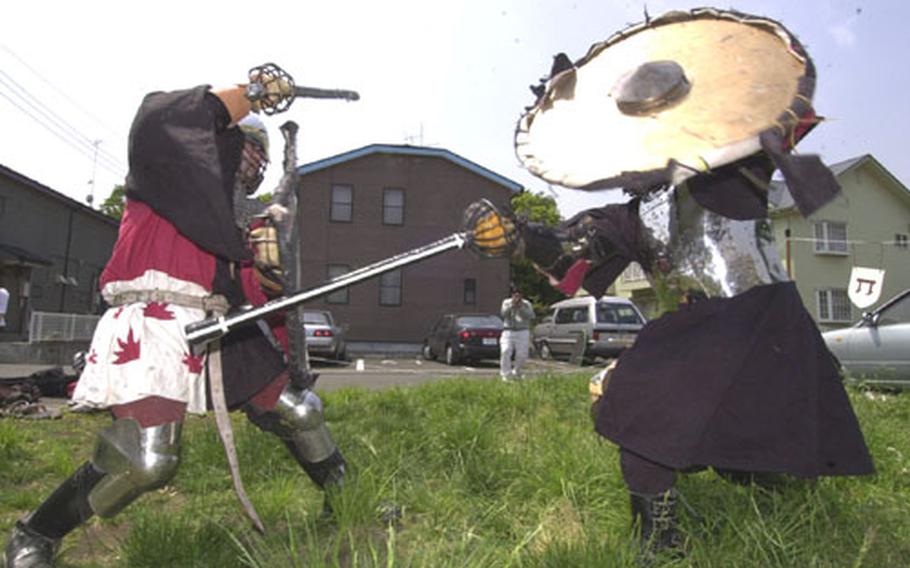 Mark Iacampo, on the left, as "Lord Codogan," duels in a medieval combat with rattan swords against Yuji Okada as "Lord Raven." (Jim Schulz / S&S)

Mark Iacampo, on the left, as "Lord Codogan," duels in a medieval combat with rattan swords against Yuji Okada as "Lord Raven." (Jim Schulz / S&S) 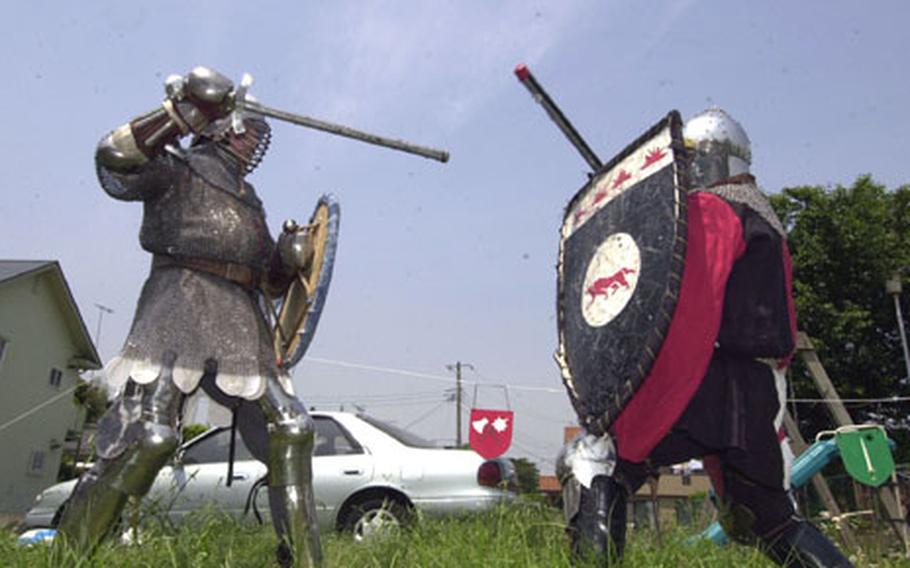 CAMP ZAMA, Japan &#8212; At the end of a long week teaching at Zama American High School, Cindy Peterson throws on armor, assumes the persona Fiona Wiggins, and knocks around some stick-wielding knights.

Peterson is a member of the Society for Creative Anachronism, a group of 30,000 medieval-history buffs worldwide who re-create the Middle Ages to extol the virtues of chivalry and knighthood.

The society invites members to step back in history, learn about the era and participate in the adrenaline rush of medieval battle.

Peterson was drawn to the group for its refined elements &#8212; studying the arts and sciences of the Middle Ages. But the battles were a quick attraction.

The society spawned from a medieval-themed party held in Berkeley, Calif., in 1966 and has since exploded in popularity. Members say it&#8217;s appealing to Americans stationed abroad for the instant camaraderie it offers and the underlying principals of honor and virtue.

Members gather weekly to practice fighting or work on projects such as embroidery or leatherwork. They make all their own armor from scraps of metal and convene with other groups for competitions that can last one day to two weeks.

As historians learn about the customs and technology of the times, society members put them into practice, she said.

Mark, a knight, goes by the name Sir Codogan Map Cado. He met Kathryn, known as Maestra Eufemia Serafina da Bergamo, through the group in Arizona. Both are civilians at Camp Zama.

Members use medieval names and often concentrate on a special period in history, such as the War of the Roses in England. The group&#8217;s official era stretches from the end of the Roman Empire until the 1600s and the dawn of the Renaissance.

The society has two thrusts &#8212; learning the arts and sciences of the period, and perfecting the dress, technique and prowess of fighters and knights.

Fights involve large sticks and use the honor system &#8212; individuals decide their own injuries based on blows. Most go home with real bruises.

Peterson helps others with costumes and embroidery. Her interest in costumes drew Peterson to the group seven years ago while working for DODDS in Europe.

When a male friend in the group asked for guinea pigs to try out female armor he was making, she began her fighting career. She now fences and fights in heavy armor.

Fighting especially attracts military personnel, members say. There are active or dormant groups near most military bases in the Pacific.

The group is broken into a hierarchy much like the military. People start off at the bottom with no title. As they advance, by winning fights or arts and science competitions, they become lords and ladies, knights and masters and finally, royalty. In Japan, rulers are barons and baronesses, who hold their title for six months, until the next competition.

Peterson was a recent baroness, after winning a competition for her handmade period dresses.

Everyone is welcome in the group. Zama American High School senior Suzanne Beach, who goes by Rhiannon Cuillrheainn, said being a member helped her with school. &#8220;It&#8217;s so easy to get an A in European history because of this.&#8221;

Members in the Kanto Plain also join a Japanese sister group in Tokyo for battles and events.

Members admit theirs may be a more romantic view of the Middle Ages, when in real life plagues were rampant. But there was more enlightenment to the period than some might realize, Mark Iacampo said, and that is what attracts members.

&#8212; Hana Kusumoto contributed to this story.

Society for Creative Anachronism groups exist near military bases around the world. In Asia, groups are found in the Kanto Plain, Guam, Okinawa and South Korea.

Two dormant groups, in Misawa and Iwakuni, are looking for members to restart the group.

Information about the locations can be found at the following Web sites:

&#8226; To revive either The Stronghold of Eternal Winds (Misawa, Japan) or The Incipient Stronghold of the Argent Serpent (Iwakuni, Japan), contact:baronyofarwest@yahoo.com or fwcoronet@yahoo.com