Chipping away pays off with Super Bowl trip for soldier 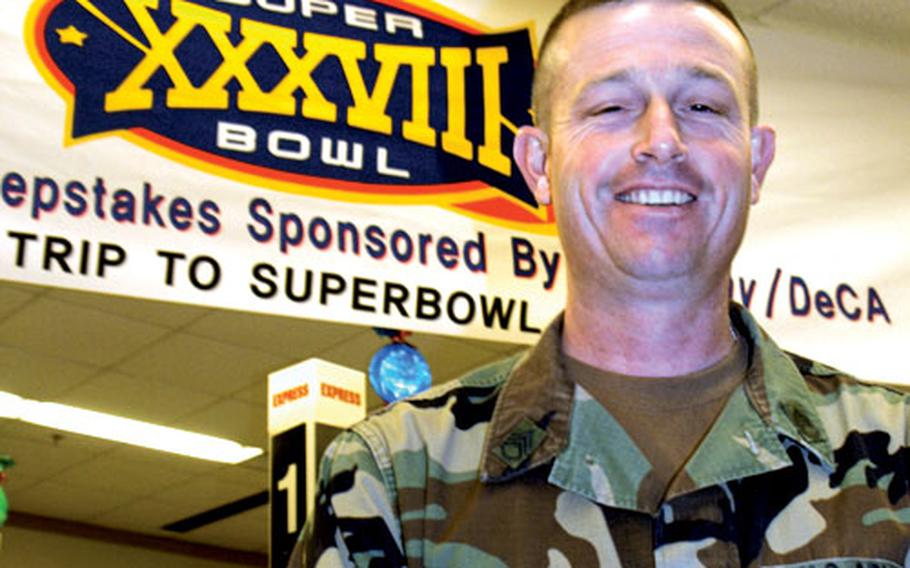 Staff Sgt. James Scott, of the 2nd Infantry Division, won a trip to the Super Bowl, thanks to his love of potato chips. (Seth Robson / S&S)

But now his potato chip predilection has paid off. Scott, a 2nd Infantry Division Headquarters and Headquarters Company driving safety instructor, won a trip for two to Super Bowl XXXVIII in Houston after entering a Frito-Lay-sponsored drawing at the commissary earlier this year.

Scott wanted to take his son Glen, who lives in Killeen, Texas, to the game, but the prize stipulates the trip is available only for people 18 and older. So he invited his supervisor, Sgt. 1st Class Vihn Cayton.

Scott has spent more than eight years in South Korea since his first posting in 1986. During that time, he said he has averaged one large bag of potato chips or three small bags daily. He admitted his potato-chip habit is not healthy but said he works out regularly, offsetting the effects of such a high-fat snack.

The only leisure activity he likes better than eating potato chips is watching sports, he said. His favorite NFL team? The Kansas City Chiefs, and he&#8217;s betting he&#8217;ll get to see them Feb. 1 at the Super Bowl.