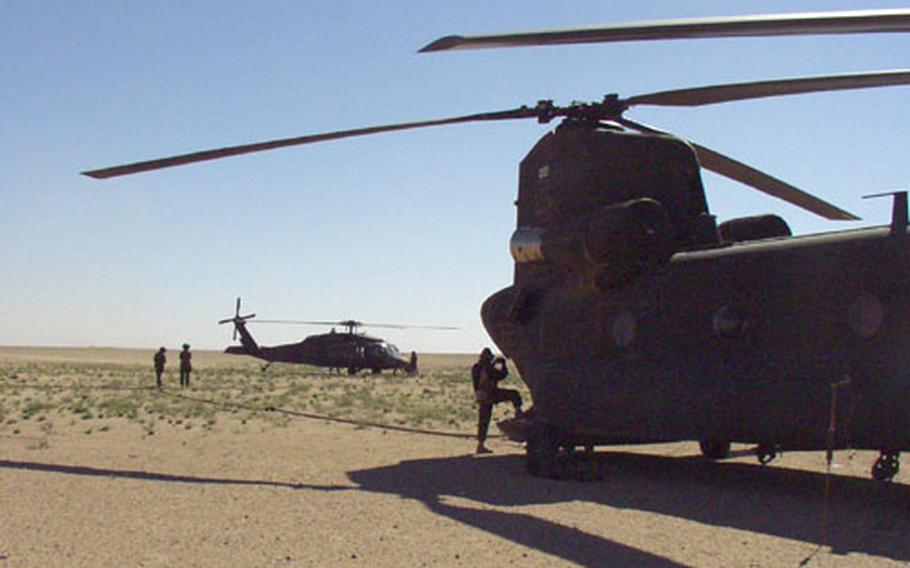 Crew members from a Black Hawk helicopter, left, hook up to a Chinook during a fat-cow refueling exercise in the Kuwaiti desert. (Courtesy of U.S. Army)

CAMP UDAIRI, Kuwait &#8212; Two Black Hawk and three Apache helicopters swoop down out of the darkness at a barren spot in the desert, their running lights out so the enemy can&#8217;t see them.

Waiting silently are two ungainly CH-47 Chinooks, their cargo holds each loaded with two spare 200-gallon fuel tanks. A thick hose runs from the fuel tanks, then splits into a Y.

The Black Hawks and Apaches hop into place like birds at a feeder, as soldiers swarm around to refuel them, relying on radar and pilots&#8217; night-vision goggles to avoid each other.

Each sips just enough fuel to complete its mission and get home safely. Minutes later, all the helicopters lift off, leaving the desert once again silent.

This is the Army&#8217;s answer to aerial refueling.

Fat-Cow refueling is essential for the deep-strike missions V Corps attack squadrons will carry out if they go to war with Iraq.

Back in Germany, the skill is practiced only occasionally. Even deep-strike training missions usually are flown relatively close to home. The German countryside, with sleeping villages close together, doesn&#8217;t offer many locations for the demanding nighttime drill.

Fat-Cow work in the daytime isn&#8217;t especially difficult, pilots say, but at night it&#8217;s another story.

Night-vision goggles, which greatly magnify existing light, don&#8217;t work especially well in the desert because there are so few light sources. At night, the job puts helicopters, fuel and soldiers with limited vision all in close quarters in the dark.

Refuelers such as Staff Sgt. Curtis Johnson, 30, of Crossett, Ark., say they practice Fat-Cow drills frequently, so even night work doesn&#8217;t bother them much.

Johnson said his 20-soldier unit &#8212; currently at the 35th Kuwaiti Air Force Brigade base west of Kuwait City &#8212; is ready to gas up a Chinook and go anywhere, anytime.