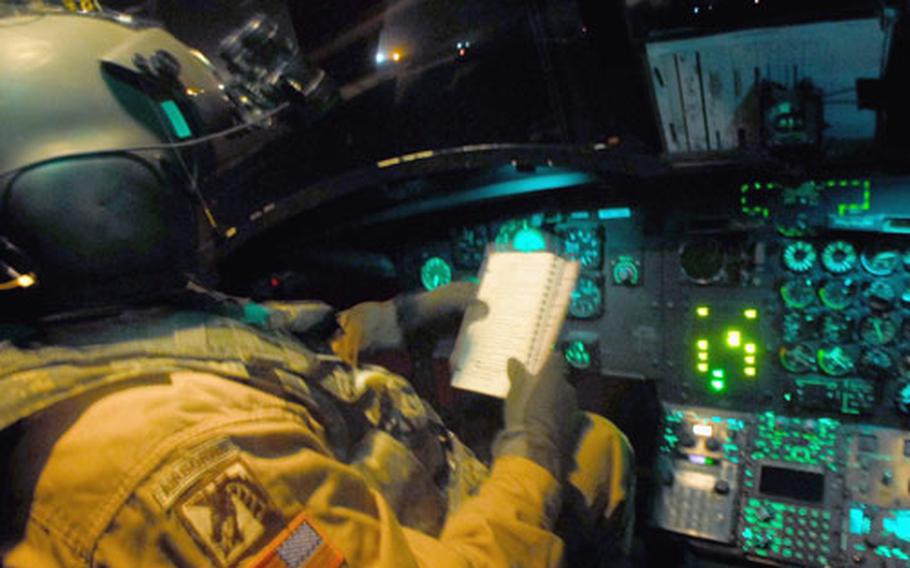 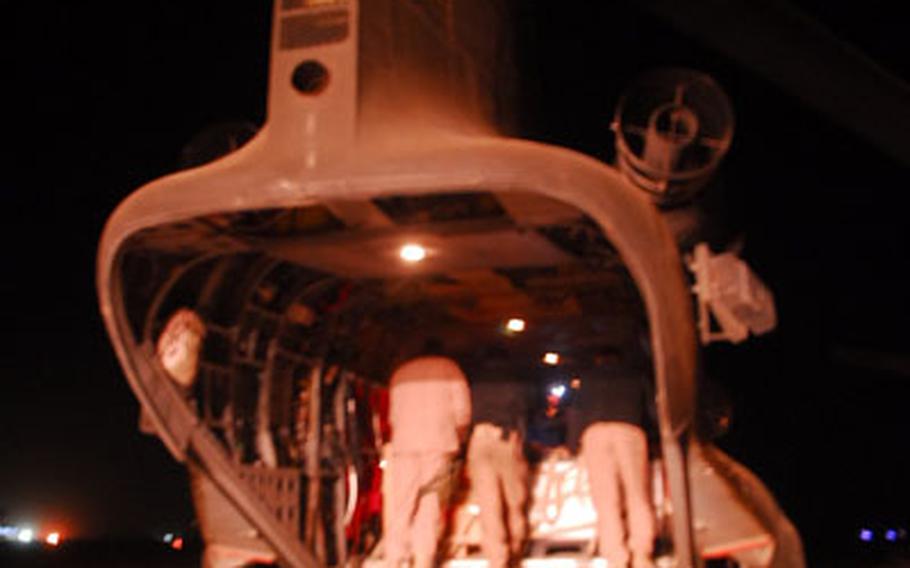 Crewmen load pallets of supplies into the cargo area of a CH-47D Chinook helicopter prior to taking off on a night "Lightning Express" run. (Monte Morin / S&S) 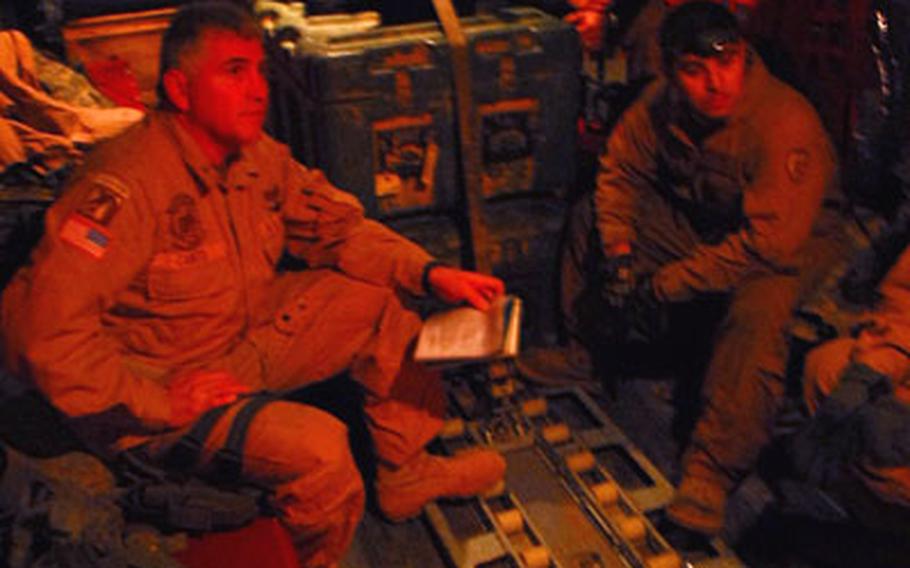 COB SPEICHER, Iraq &#8212; To the naked eye, the natural gas fires of Kirkuk glow in the night like coals scattered in a vast, dark furnace.

Even now, miles away from the flames and hundreds of feet above the earth, the cockpit of Chief Warrant Officer 4 Charles &#8220;Chico&#8221; Cantu&#8217;s massive CH-47D Chinook helicopter reeks of burning fuel.

&#8220;Lots of smoke at 1 o&#8217;clock,&#8221; Cantu warns his co-pilot, Chief Warrant Officer 2 Scott Ward, 32, of Encampment, Wyoming. Through the lenses of their night-vision goggles, the gas fires have turned night to day. The city and the clouds above it are bathed in a ghostly green sunshine.

As the heavy lift element of the Hawaii-based 3rd Battalion, 25th Aviation Regiment, the soldiers are responsible for transporting thousands of personnel and thousands of tons of equipment throughout northern Iraq. The &#8220;Lightning Express&#8221; runs, which link bases in Tikrit, Kirkuk, Mosul, Tal Afar and Qayyarah West, occur at night when the roaring Chinooks are all but invisible to the enemy.

On a recent Lightning Express run, Cantu&#8217;s Chinook lifted off from COB Speicher with a payload of bomb disposal robots, vehicle parts and roughly a dozen passengers and crew. For the next six hours, the crew would speed over mountain ranges, farmlands, and desert at speeds greater than 100 mph, loading and unloading passengers and material at each stop.

In the aircraft&#8217;s cargo area, flight engineer Spc. Jeremiah Belyeu, 22, of Houston, monitored the helicopter&#8217;s hydraulics and other instruments and rode herd on the passengers and cargo that passed in and out of the Chinook.

Among the hazards of night flying are dust storms, plumes from gas fires and massive power-line towers that rise as high as a football field is long. Cantu, 50, a Hawaii National Guard member and a Federal Aviation Administration inspector, used a map book and a small, portable computer strapped to his knee to plot the position of power lines.

Due to the amount of equipment hauled this evening, seats for passengers were at a minimum &#8212; bad news for would-be passengers who hoped to snag a space-available seat.

On those occasions though when seats are scarce, Belyeau said some space-A passengers refused to believe that there isn&#8217;t enough space.