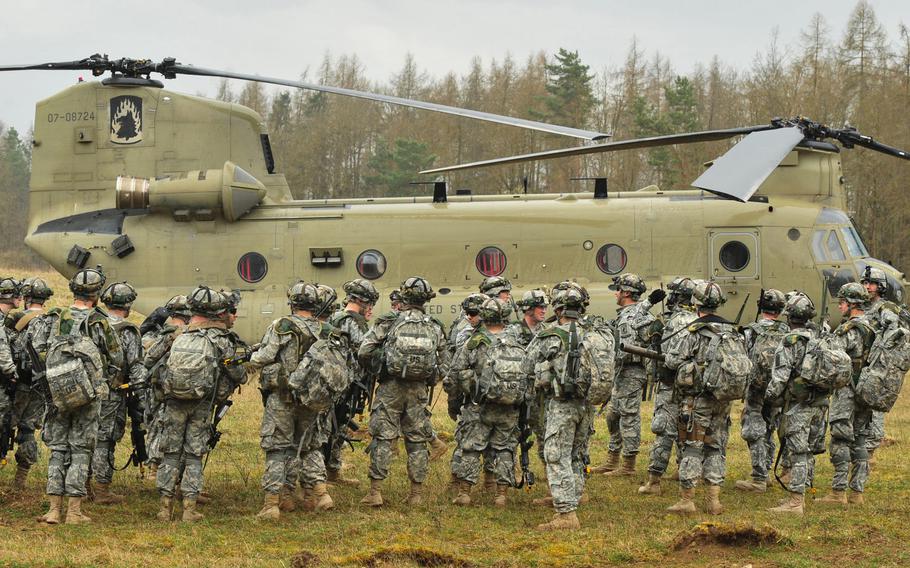 Paratroopers prepare to board a CH-47 Chinook in Germany in 2014. A CH-47F with nine soldiers made a precautionary landing in the town of Morsdor on Wednesday, Sept.13, 2017. (Markus Rauchenberger/U.S. Army)

GRAFENWOEHR, Germany &#8212; A U.S. helicopter with nine soldiers has made a precautionary landing in the German town of Morsdor due to mechanical issues, military officials said.

The CH-47F Chinook and crew were flying to Hohenfels Training Area on Wednesday to conduct terrain flights and external load training when the pilot received indications of a transmission function issue. The pilot executed a precautionary landing in a field about 10 miles southeast of Nuremberg, and shut the aircraft down for safety. No crewmembers reported any injuries, officials said.

A downed aircraft recovery team and a safety team from 10th Combat Aviation Brigade were immediately dispatched to assess if the aircraft or local area received any damage as a result of the landing.

Army officials say the incident was under investigation.