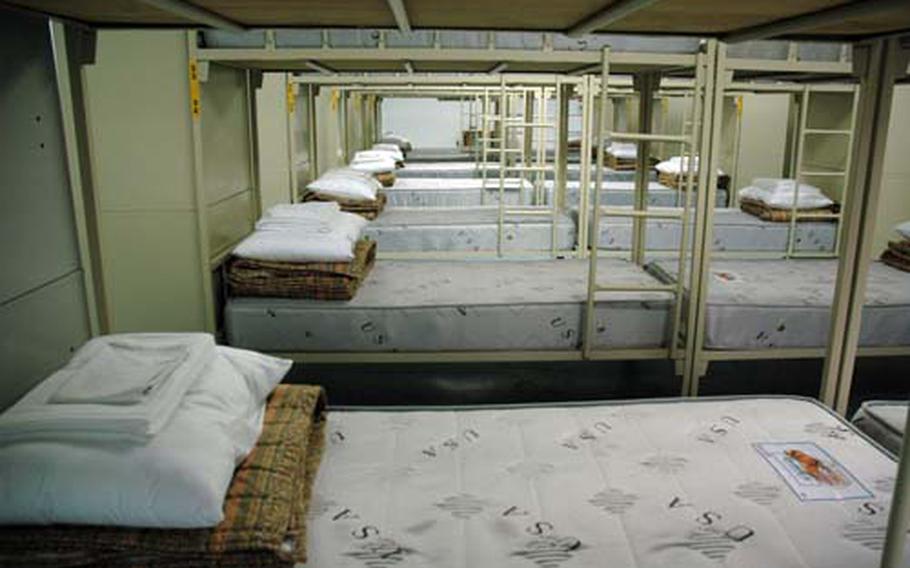 The Navy is about halfway through a project to build 500 berths, like these, at Chinhae Naval Base. Each building costs about $600,000, and can sleep 60 to 80 people. The goal is to build one building every two years until the base has 500 berths. (Teri Weaver / S&S)

The Navy is about halfway through a project to build 500 berths, like these, at Chinhae Naval Base. Each building costs about $600,000, and can sleep 60 to 80 people. The goal is to build one building every two years until the base has 500 berths. (Teri Weaver / S&S) 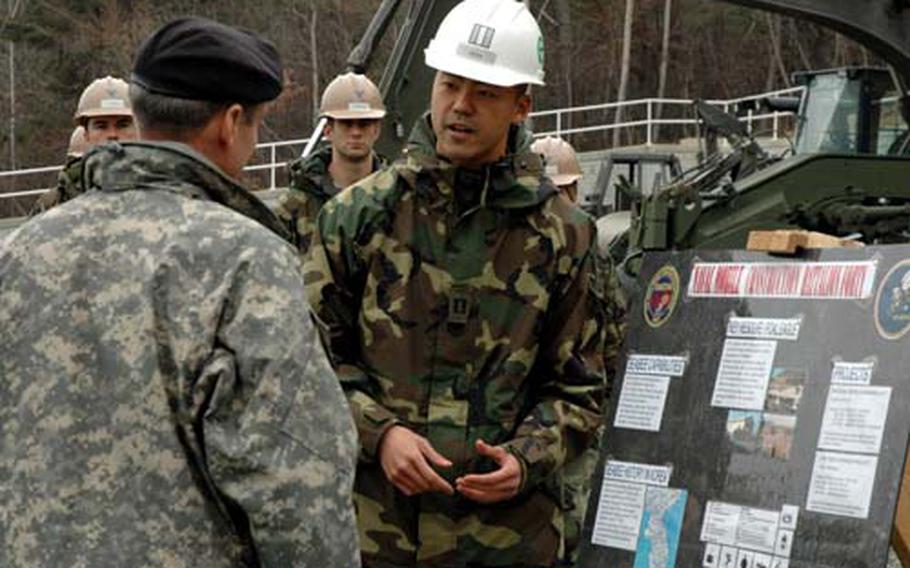 Navy Lt. Spencer L. Shih, of Naval Mobile Construction Battalion 40, deployed from Port Hueneme, Calif., briefs U.S. Forces Korea commander Gen. Walter Sharp last week on building projects at Chinhae Naval Base. Navy Seabees have done much of the construction work at Chinhae; this unit is working on a utilities upgrade and building a road on base. (Teri Weaver / S&S)

Part of the plans involve upgrading aging infrastructure and buildings, including the replacement of a commissary that opened in 1958.

But part of the investment is turning Chinhae Naval Base into a technological and physical hub for the military, according to Navy officials overseeing the projects.

Next week, the Navy will move into its new headquarters on the base, a building so equipped with technology and security that it could be used as an operations headquarters for U.S. Forces Korea or the Navy&#8217;s 7th Fleet, officials said.

"I don&#8217;t think there&#8217;s any other building on the [peninsula] that is this advanced," said Mike Papale, an assistant director of information technology for Commander Naval Forces Korea who oversaw the $7 million project.

The investment comes as the U.S. and South Korean governments are shifting most American ground forces on the peninsula to Pyeongtaek, south of Seoul. Chinhae, adjacent to a South Korean navy base on the country&#8217;s southeast coast, will remain after the transition.

The U.S. military uses Chinhae as a temporary home during port calls from visiting ships and during wide-scale exercises. When those visitors leave, the base, squeezed into the side of a small mountain, turns more toward family life. Of servicemembers eligible to bring families, 77 percent do, base commander Cmdr. Andy Weedon told USFK commander Gen. Walter Sharp last week when the general visited Chinhae.

"That&#8217;s probably better than we do," Sharp acknowledged, noting the Army&#8217;s push to get more servicemembers to come to South Korea with families for longer tours.

At Chinhae, the school teaches students from kindergarten to eighth grade. The theater shows three films a week. And, every week, anyone who signs up and takes a short training course can get a ride on the base fire truck.

In time, however, Chinhae&#8217;s place in military strategy could change, especially as South Korea takes over wartime military control from U.S. forces in coming years. Leaders acknowledge that this reliance on South Korea&#8217;s numerous ground forces may mean an increase in U.S. air and naval forces.

"Certainly the importance of the Navy and our role will be greater," Weedon said. The number of scheduled port visits is up 20 percent during the first six months of this fiscal year, compared with the same time frame last year, he said.

So far, the military has spent money on a long-distance learning center for high school and college students ($361,000) and solar panel installations on the base&#8217;s laundry ($60,000). Those projects, along with a new bank set to open late this spring ($230,000), are meant to improve morale and services on the base.

But the military also is investing in Chinhae for the long term. It&#8217;s about halfway through a multimillion-dollar barracks project to provide berthing for an additional 500 people, according to Weedon.

The barracks, which sleep 60 to 80 to a room, will house servicemembers who come to Chinhae for military exercises. The beds also could be used for temporary housing during crises when some workers and military families would be evacuated from the peninsula, he said.

Another barracks project will add a second floor to a single-sailors housing unit. The construction bid for the project, estimated to cost $1.05 million, is to be awarded in March, according to Navy spokeswoman Lt. Cmdr. Pamela Bou.

The centerpiece for military operations opens unofficially next week when Weedon and his staff move into the first floor of the new headquarters building, about 75 percent of which the South Korean government funded. In time, Rear Adm. Thomas S. Rowden, commander of CNFK, will use the second and third floors to direct operations during exercises.

Those floors are secure for U.S. personnel only, with a series of meeting and briefing rooms that have 300 connections to the military&#8217;s secure Internet, 193 connections to the public Internet, and 136 connections to a special South Korean network, allowing the Americans and the Koreans to work together with simultaneous translations, Papale said.

Next week, leaders at Yokosuka Naval Base, Japan, will begin brainstorming designs for Chinhae&#8217;s proposed Fleet and Family Town Center, according to Lt. Cristina Suarez, a Navy architect working on the project.

The 40,000-square-foot facility &#8212; the centerpiece for military families at Chinhae &#8212; would have "everything that you can imagine in one-stop shopping" on a military base, she said. It would include an exchange store, commissary, post office, bank, laundry and educational services.

The goal is to more than double the shopping spaces of the current on-base stores.

So far, U.S. Forces Korea has approved $1.3 million to pay for the design, to be completed in November. The $18.8 million project, if approved, would go out for bids soon after that, Suarez said. Completion is initially targeted for summer 2010, she said.