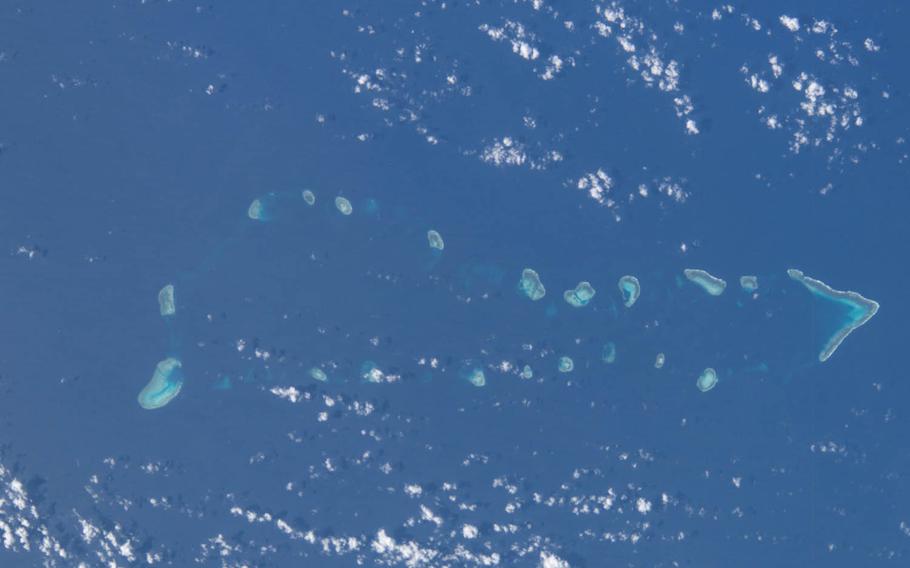 The South China Sea and part of the Spratly Islands are seen in this 2014 image taken from the International Space Station. China has delivered a new statement rejecting any ruling by an international court over its actions in the sea, potentially putting Beijing at odds with the United States and Asia-Pacific nations. (Courtesy of NASA)

YOKOSUKA NAVAL BASE, Japan — China has delivered a new statement rejecting any ruling by an international court over its actions in the South China Sea, potentially putting Beijing at odds with the United States and Asia-Pacific nations.

In a post on China’s Foreign Ministry website Thursday, Beijing argued that the Philippines’ case against it to the Permanent Court of Arbitration “breaches international law” because its disputes aren’t being resolved bilaterally.

A Philippine win on some of the 15 claims in the case, which will be ruled upon July 12, would bolster U.S. arguments that some of China’s actions, which include building up and militarizing artificial islands, have no standing under international law.

U.S. Navy ships and aircraft have repeatedly transited near the islands occupied by China, in areas which Washington considers part of the global commons under the U.N. Convention on the Law of the Sea.

China has labeled such operations a violation of its sovereignty.

The new statement delivered by Foreign Ministry spokesman Hong Lei argues that the PCA, a 121-nation dispute resolution body, has no jurisdiction over the case.

“With regard to territorial issues and maritime delimitation disputes, China does not accept any means of third-party dispute settlement or any solution imposed on China,” Hong said.

The court agrees to an extent; it doesn’t make rulings on who rightfully owns any of the islands in the South China Sea, which are claimed by China, Taiwan, Vietnam, Malaysia and the Philippines.

However, in an earlier motion, the court ruled that it did have jurisdiction to hear several Philippine arguments.

Perhaps the most controversial argument would declare China’s “nine-dash line” in conflict with the Law of the Sea convention.

China has never clarified what the line means on its maps; however, it has inferred that the line covering 90 percent of the sea is a territorial boundary.

That line also cuts through the 200-mile exclusive economic zones of multiple nations, including the Philippines.

Chinese and Philippine ships have engaged in low-level showdowns at sea over territory and fishing rights. Such actions concern the U.S., which is allied to the Philippines under a defense treaty.

It remains unclear how the court will rule on the nine-dash line, but other aspects appear to be in the Philippines’ favor, Paul Gewirtz, constitutional law professor and director of the Paul Tsai China Center at Yale, wrote in a Brookings report in May.

One such argument is that Fiery Cross Reef, an artificial island where China has built a military-grade airfield and added self-propelled artillery, doesn’t gain some of the economic and territorial benefits associated with islands and continental shelves.

Gewirtz dismissed Beijing’s assertion that the disputes could only be settled privately between it and Manila.

“The agreements with the Philippines that China has invoked are vague political statements,” he said. “The arbitration tribunal has already rejected China’s arguments based on this exception, and properly so.”

Although China hasn’t agreed to participate in the case, it has issued public position papers the court has considered in its deliberations.

China reiterated Thursday it would not consider any ruling from the court as valid. The U.S., which the court considers a member state, disagrees.

Defense Secretary Ash Carter noted during his talks with Singaporean leaders on June 4 that the “ruling on the Philippines-China claims will be binding on both parties,” Pentagon spokesman Peter Cook said in a statement.