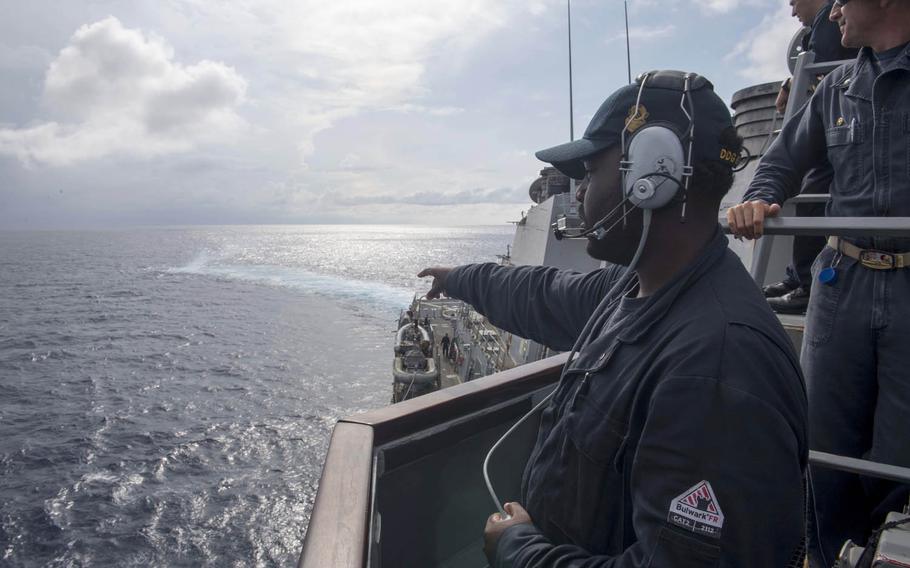 The Chinese navy has joined a joint U.S.-Japanese search for a missing American sailor who was reported overboard from a U.S. warship Tuesday in the South China Sea.

The sailor, who is a male lieutenant according to The Associated Press, had not been found as of Thursday evening local time, Navy officials said. They are not releasing the sailor’s name while the search continues.

“The search is ongoing,” Navy Lt. Paul Newell, a 7th Fleet spokesman, said Thursday. “We still have assets out there looking for this sailor.”

Two Chinese People’s Liberation Army Navy frigates were shadowing the guided-missile destroyer USS Stethem when the sailor was reported overboard at about 9 a.m., Navy officials said. A call went out to mariners in the area asking for assistance, and the Chinese navy got involved in search-and-rescue efforts sometime Wednesday.

“They were in the area … it’s common for mariners to render assistance [when a sailor is reported overboard],” Newell said. “They were in a position to help.”

Navy officials did not have specifics on precisely which Chinese ships are helping. They said Chinese aircraft are not involved in the search.

The Stethem, USNS Amelia Earhart, USNS Vice Admiral K. R. Wheeler and a Navy P-3 aircraft are involved in the search. The Japan Maritime Self-Defense Force has dedicated two ships — the helicopter carrier JS Izumo and the destroyer JS Sazanami — along with helicopters from the Izumo to the efforts.

China’s effort to find the missing U.S. sailor will likely have little impact on the countries’ tense relationship, said Homare Endo, director of the International Exchange Center of the Tokyo University of Social Welfare.

“I don’t believe China helped to deliberately bring change to the U.S.-China relationship,” said Endo, who said she believes China’s involvement is more of a public relations move to deflect criticism over its military buildup in the South China Sea.

It could also be to “regain face,” she said, after refusing to properly thank the Japan Coast Guard after it rescued Chinese fishermen who were lost at sea last year after a collision with a Greek vessel.

China, which has built up and upgraded its military in recent years, has also expanded territory in the South China Sea with a series of weaponry-equipped artificial islands built on reefs and other maritime features.

The U.S. has frequently conducted freedom-of-navigation patrols near those disputed South China Sea islands. On July 2, the Stethem sailed within 12 nautical miles of Triton Island on the basis of innocent passage, a U.S. official said at the time. Triton is part of the Paracel chain also claimed by Vietnam and Taiwan.