Chinese missile-test sites appear to mirror US bases in Japan 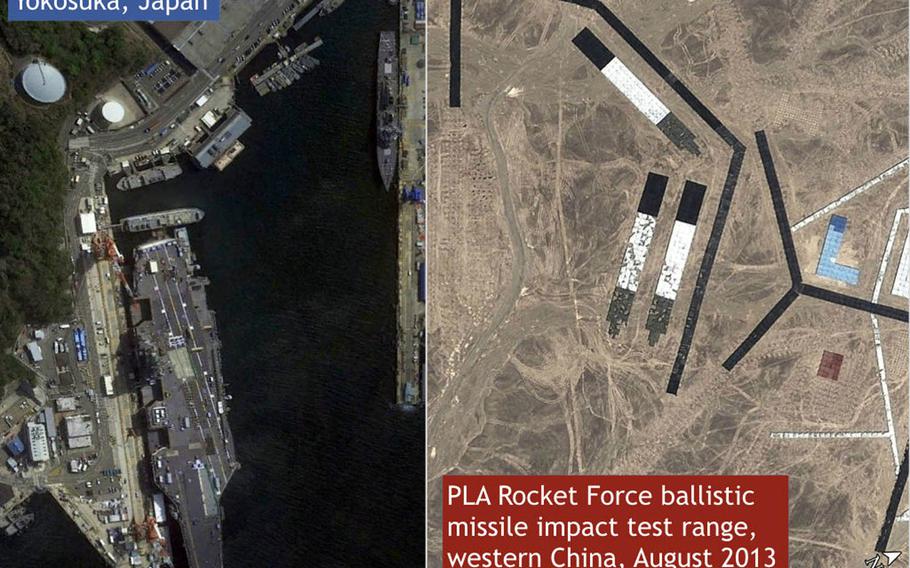 Satellite images show similarities between Yokosuka Naval Base, Japan, left, and a missile-test range in western China. (Courtesy of War on the Rocks)

Satellite images show similarities between Yokosuka Naval Base, Japan, left, and a missile-test range in western China. (Courtesy of War on the Rocks) 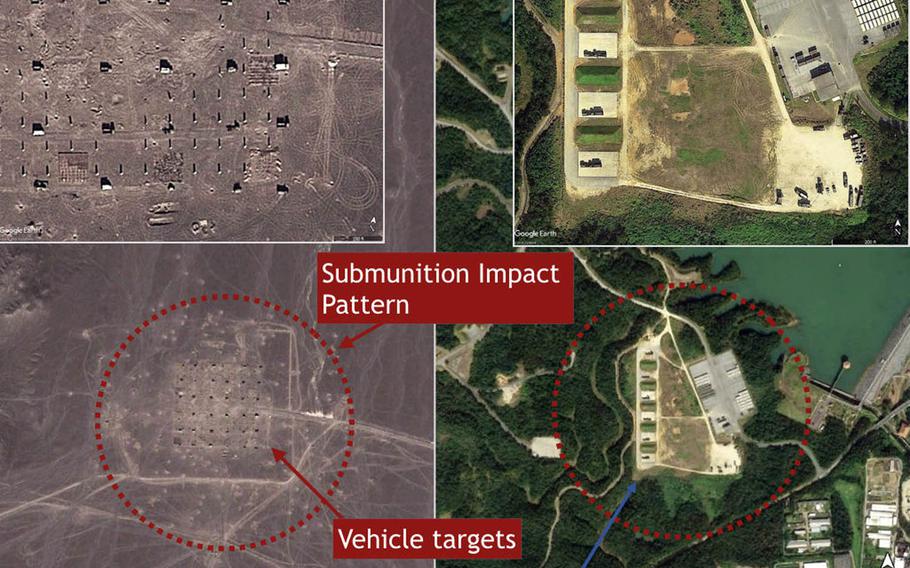 These Google Earth images compare Patriot Battery at Kadena Air Base, Japan, with a Chinese missile-test range in the Gobi Desert. (Courtesy of War on the Rocks) 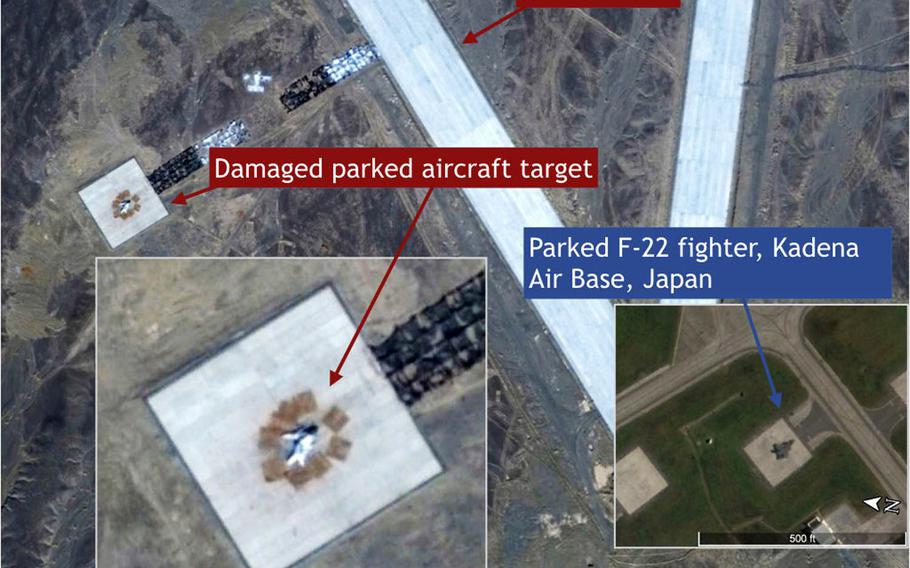 These Google Earth images compare an F-22 fighter at Kadena Air Base, Japan, with a damaged aircraft target and mock airfield at a Chinese missile-test range. (Courtesy of War on the Rocks) 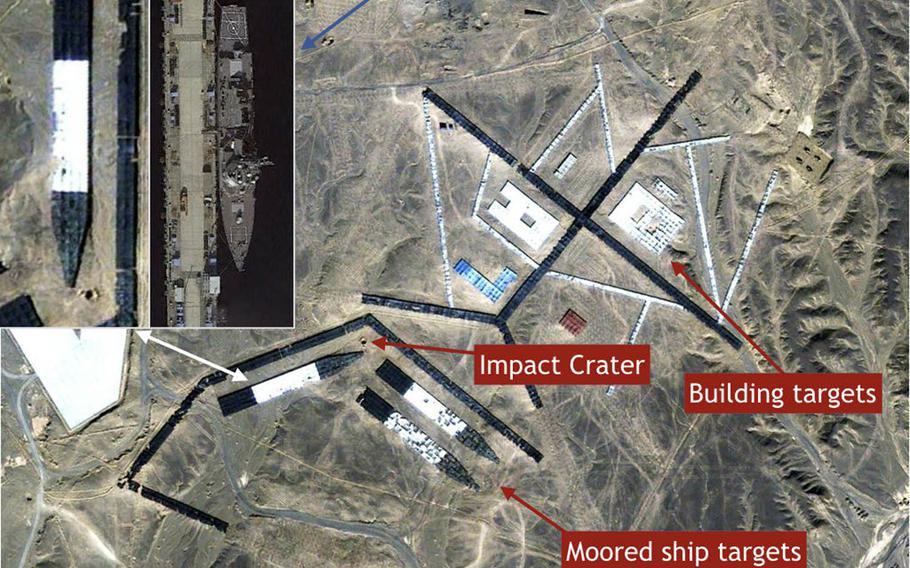 Satellite images show targets at a Chinese missile-test range that look like U.S. warships. (Courtesy of War on the Rocks) 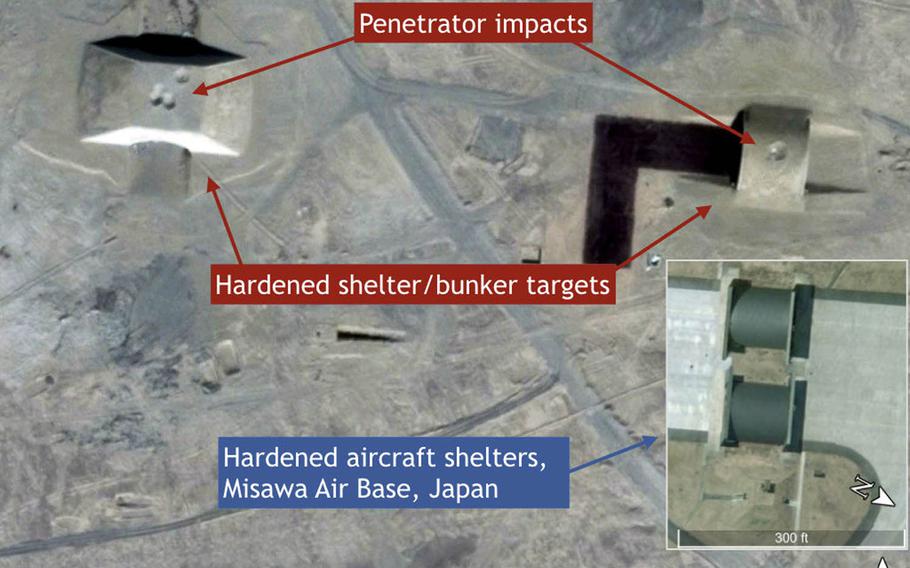 A Google Earth image shows the damage that Chinese missiles are capable of inflicting on hardened aircraft shelters that look a lot like those at Misawa Air Base, Japan. (Courtesy of War on the Rocks) 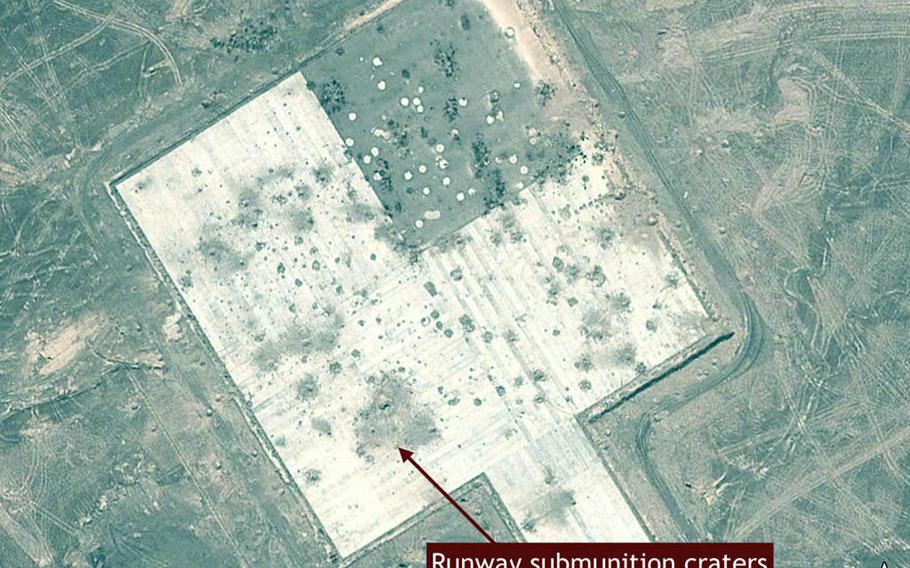 This Google Earth image of a Chinese missile-test range shows the damage the missiles can do to a runway. (Courtesy of War on the Rocks)

YOKOTA AIR BASE, Japan — As worrisome as North Korea’s missile capability has become, defense experts say China is a more potent threat to U.S. interests in Asia, with Beijing capable of showering bases in Japan with missiles and leaving U.S. forces little time to react.

Google Earth images showing Chinese missile test sites on the edge of the Gobi Desert side by side with U.S. facilities in Japan were included in a recent “War on the Rocks” report by Navy Cmdr. Thomas Shugart, a senior fellow at the Center for a New American Security.

The analysis, which focuses on the People’s Liberation Army’s missile force and the threat it poses to U.S. installations, personnel and equipment in the Western Pacific, says U.S. forces would have almost no time to react to incoming Chinese missiles.

“The time available between the first detection of a missile launch by U.S. space-based missile warning sensors to its impact would probably be on the order of 10 to 15 minutes,” Shugart wrote.

Google Earth allows anyone to view sites that a few years ago only those with high-level security clearances could see, said former Air Force officer Ralph Cossa of the Pacific Forum CSIS think tank in Hawaii.

One Chinese missile-test area looks a lot like Yokosuka Naval Base, Japan, home of the 7th Fleet, with targets that appear to imitate docked Arleigh Burke-class destroyers. Other targets look like airfields, planes, air-defense batteries, fuel depots, bunkers and power stations at Kadena and Misawa air bases. Some images show the impact of missiles on mock runways covered in hundreds of blast craters.

Defense experts don’t think the U.S. and China will fight anytime soon, but much of the war gaming that the U.S. does in the Western Pacific — such as recent maritime drills with Japan in the East China Sea — is geared toward scenarios that could arise in such a conflict.

The report, which preceded recent North Korean missiles tests, said the U.S. and its allies should publicly practice defense against mass ballistic-missile attacks.

“Skeptics might say that catching the U.S. flat-footed would be unlikely, but history teaches us not to discount the possibility of successful surprise attacks,” Shugart wrote.

Servicemembers at Yokota Air Base — headquarters of U.S. Forces Japan and 5th Air Force in Tokyo — spent six days last month practicing how they would respond to a missile attack. The exercise included a mock warning, broadcast over the base’s public-address system, that missiles were incoming and personnel should assume Mission Oriented Protective Posture 4 by putting on protective suits, rubber boots, gloves and gas masks.

“We’re not expecting any attacks like this, but we should always be ready,” said Senior Master Sgt. Greg Lilly, a member of a team inspecting troops involved in the drills.

A group of airmen from Yokota’s 374th Communications Squadron were wearing protective suits and boots when they heard the warning. It took them under two minutes to don masks and gloves, seal their suits and lie on the floor, sheltering from a mock explosion while Lilly checked their equipment for leaks.

In another part of the base, inspectors checked organizations’ abilities to maintain command and control after an attack, detect chemical agents and decontaminate personnel.

“As long as our guys are safe, we’ll get the planes in the sky,” Lilly said.

Yokota’s 374th Civil Engineer Squadron also trained to repair damaged airfields. Clad in chemical-protection gear, the engineers cut into concrete and patched it back up as if it had been hit by enemy bombs or missiles.

Other defense experts have aired concerns about missile threats. A 2015 RAND Corp. report estimated that by this year, China would have acquired enough missiles to stop U.S. fighters flying out of Kadena on Okinawa for up to 43 days during a conflict in Taiwan.

“Kadena is like a sitting duck susceptible to missile attacks from the Chinese,” Martin Schulz, a senior research fellow at the Fujitsu Research Institute, told the Foreign Correspondents’ Club of Japan in November. “We should disperse our forces in Asia and out of Okinawa.”

U.S. commanders can disperse their forces in the Western Pacific if their bases are threatened, though that might degrade their ability to respond to a crisis. There are roads all over Asia that can serve as alternative landing strips, and ships are particularly difficult to track at sea, Cossa said.

However, it might not make sense to worry too much about a surprise attack, he said.

“You don’t start building missile defenses based on the probability that China will fire 1,000 missiles at Okinawa,” he said. “That would be the beginning of World War III that China would lose. Whether it constitutes a threat in peacetime we need to be responding to is another story.”