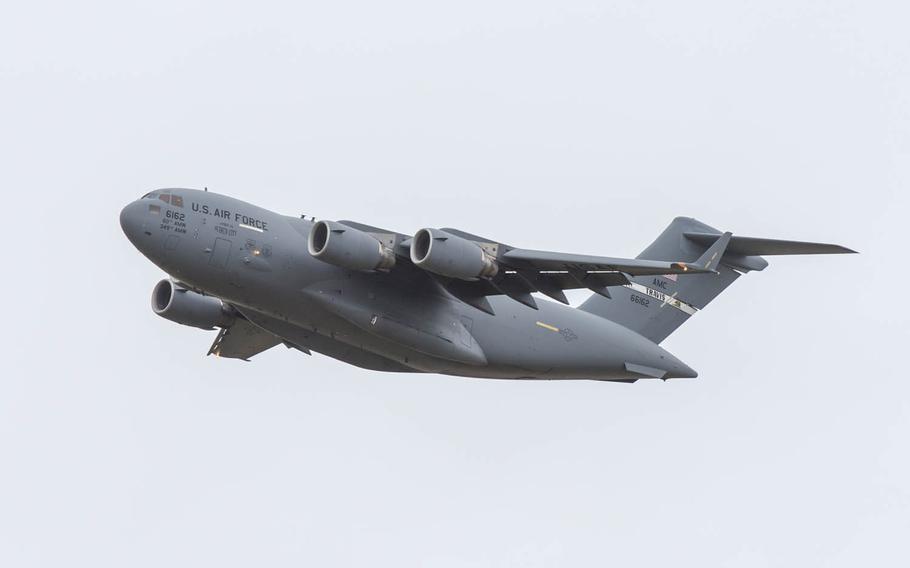 A C-17 Globemaster flies near Travis Air Force Base, Calif., May 7, 2015. A Chinese man has pleaded guilty to stealing military technical data, including data related to the C-17 strategic transport aircraft as well as some military fighter jets, and to send that stolen data to China. (Heide Couch/U.S. Air Force)

The Justice Department chalked up a victory in the war against cybertheft Wednesday when a Chinese national pleaded guilty in U.S. District Court to hacking into American defense contractors’ computer networks and stealing sensitive military data for sale abroad.

Su Bin, also known as Stephen Su or Stephen Subin, 50, had been charged with the yearslong conspiracy to steal military technical information — including data related to the C-17 strategic transport aircraft as well as some military fighter jets — and send it to China, according to a Justice Department statement.

The China-based businessman working in the aviation and aerospace field faces a maximum of five years in prison and $250,000 in fines — or twice the gross gain or gross loss resulting from the offense, whichever is greatest — when he stands before Judge Christina Snyder for sentencing July 13, the statement said.

Charges were filed against Bin in 2014, and he was arrested in Canada on a warrant later that year.

“Su Bin admitted to playing an important role in a conspiracy, originating in China, to illegally access sensitive military data, including data relating to military aircraft that are indispensable in keeping our military personnel safe,” Assistant Attorney General for National Security John Carlin said in the statement. “This plea sends a strong message that stealing from the United States and our companies has a significant cost; we can and will find these criminals and bring them to justice. The National Security Division remains sharply focused on disrupting cyber threats to the national security, and we will continue to be relentless in our pursuit of those who seek to undermine our security.”

In the plea, Bin admitted to conspiring with two others in China from October 2008 to March 2014, the statement said. One of the targets was the Boeing Co. in Orange County, Calif.

Bin would email his co-conspirators detailing which people, companies and technologies to target during their computer intrusions, the statement said. One of the co-conspirators would then gain access to information on the computers of U.S. companies, using a cloaking agent to avoid detection, and email Bin directory file listings and folders showing the data. Bin then recommended which files and folders they should steal.

After they had the data they were after, Bin would translate it into Chinese and they would draft reports about the information and technology they had acquired, including its value, and send it to the final beneficiaries of their hacking activities, the statement said.

Bin admitted the stolen information included data on the U.S. Munitions List contained in the International Traffic in Arms Regulations, the statement said. He also admitted engaging in crime for financial gain through the sale of the stolen data.

Cybertheft has been one of the most burgeoning areas of concern for American political and military leaders in recent years. Nations like China, North Korea and Syria have been accused of hacking U.S. military, government and defense contractor systems to steal secrets and disrupt operations.