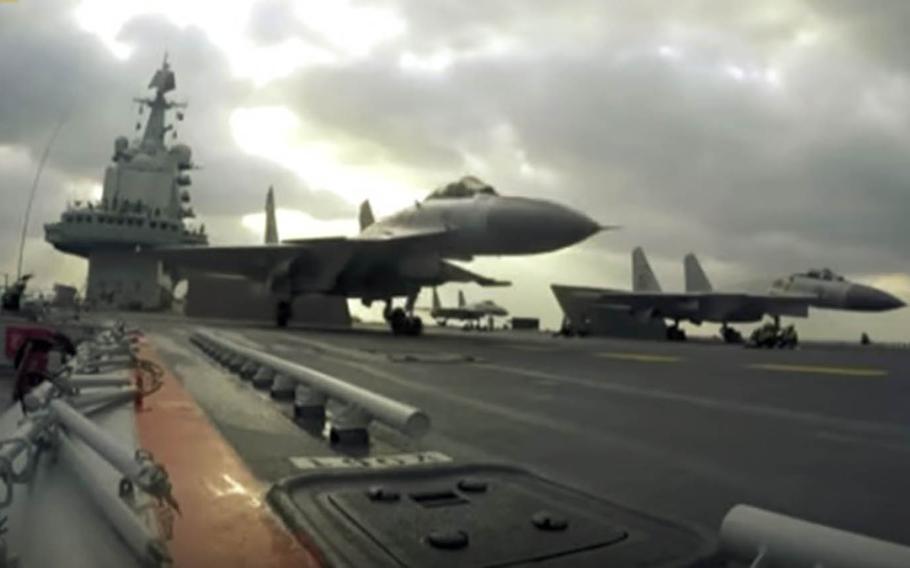 Fighter jets prepare to take off from the Chinese aircraft carrier Liaoning in this screenshot from a promotional video released last year by the communist state. (Screenshot from YouTube)

A Chinese carrier group conducted a series of live-fire drills Sunday in the East China Sea, part of the communist nation’s latest show of military force in the region.

The vessels “successfully detected and dodged an attack range from enemy submarines,” said the report, which added the exercise was the latest in a series of military drills that have taken place over the past 10 days in the Western Pacific, including the East and South China seas.

The People’s Liberation Army Navy, which marked its 69th anniversary this week, has been showcasing its military capabilities recently, beginning last month with a carrier-led formation of nearly 40 ships in the South China Sea.

China has laid claim to a huge swatch of the sea, and has spent the past several years building up tiny islets and building military facilities, including airstrips, on them.

Earlier this month, the Liaoning and six other warships conducted drills more than 200 miles south of Japan during which aircraft were launched, Japan’s Defense Ministry said.

Chinese activity in the East China Sea has been an issue for Japan. Tokyo protested to Beijing in January after a submarine, presumed to be Chinese, was detected near Okinawa and the disputed Senkaku Islands — an uninhabited chain surrounded by resource-rich waters between Okinawa and Taiwan — that is claimed by both countries but is administered by Japan.

Vice Foreign Minister Shinsuke Sugiyama expressed “great concern” over the issue and urged China not to repeat the incursion.

The Liaoning is about 60 percent lighter and 30 meters shorter than the USS Ronald Reagan — the U.S. Navy’s forward-deployed carrier in the Pacific — and carries about 24 fixed-wing aircraft compared to the Reagan, which can handle more than 55, according to a Center for Strategic and International Studies analysis of the ship.

China’s second aircraft carrier — the Shandong — is being prepared for its first sea trial, the Global Times reported last month.

China’s first aircraft carrier was intended to be used primarily for training and collecting data, while the second is “made for combat missions,” an unidentified military expert told the Global Times in the report.