China wary as US, India and Japan prep for Malabar naval drills 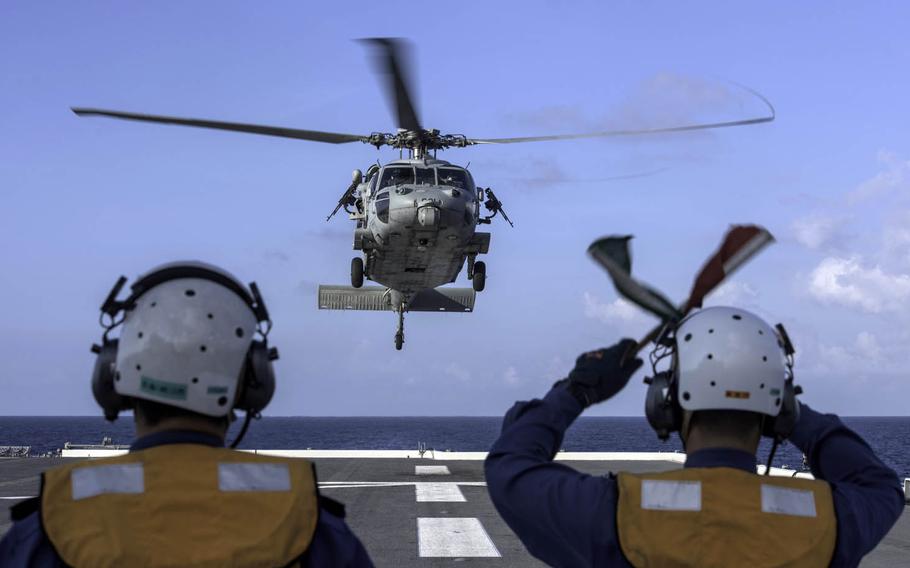 The U.S., India and Japan are gearing up for trilateral Malabar naval drills next week amid reports of increased Chinese activity in the Indian Ocean.

About 6,500 U.S. sailors and 700 from the Japanese Maritime Self-Defense Force are expected to train alongside the Indian navy in the exercise, which begins Monday and wraps up July 17.

Participating U.S. ships include the aircraft carrier USS Nimitz and its air wing along with the cruiser USS Princeton and the guided-missile destroyers USS Howard, USS Shoup and USS Kidd, a Navy statement said. A P-8A Poseidon aircraft — designed for surveillance and anti-submarine and anti-surface warfare — and a Los Angeles-class fast-attack submarine will also join the drills.

China has been critical of the annual exercise. The government-affiliated Global Times published an editorial in December saying Malabar’s purpose is to target China’s submarine activities in the East and South China seas. The editorial noted that both the U.S. and Indian navies operate variations of the P-8 Poseidon.

The Chinese government has also questioned the purpose of deploying the Izumo, which spent time in the South China Sea before heading to India, implying the JMSDF is using the vessel to provoke China. It carries up to nine helicopters and conducts some flight operations similar to a U.S. amphibious assault ship.

“If this is only about normal visits and normal transit through the South China Sea, we hold no objection and hope that such normal exchanges between relevant countries can help promote peace and stability in the region. But if it is going to the South China Sea for other motives, it would be a different story,” Foreign Ministry spokeswoman Hua Chunying told reporters at a March press conference, according to a transcript on the China Foreign Ministry website. “As we have indeed seen the Japanese side stirring up troubles on the South China Sea issue, we hope the Japanese side can truly play a responsible role for peace and stability in this region.”

Multiple Indian news outlets have reported that government officials are claiming to see a significant increase in Chinese naval activity in the Indian Ocean ahead of Malabar, with a surge in the number of Chinese warships and submarines in the region.

Both the Hindustan Times and CNN-News 18 reported that the Chinese surveillance ship HaiwangXiang has been spotted recently in the Indian Ocean, presumably with the purpose of monitoring the drills.

Malabar, which began in 1992 as a bilateral exercise between the U.S. and India, peaked in 2007 when Australia, Singapore and Japan were invited to participate. The 2008 iteration consisted of only the U.S. and India.

Japan joined again in 2009 and has participated regularly since 2014. It is now considered a permanent member of the exercise.