China to US: Mind your own business on South China Sea disputes 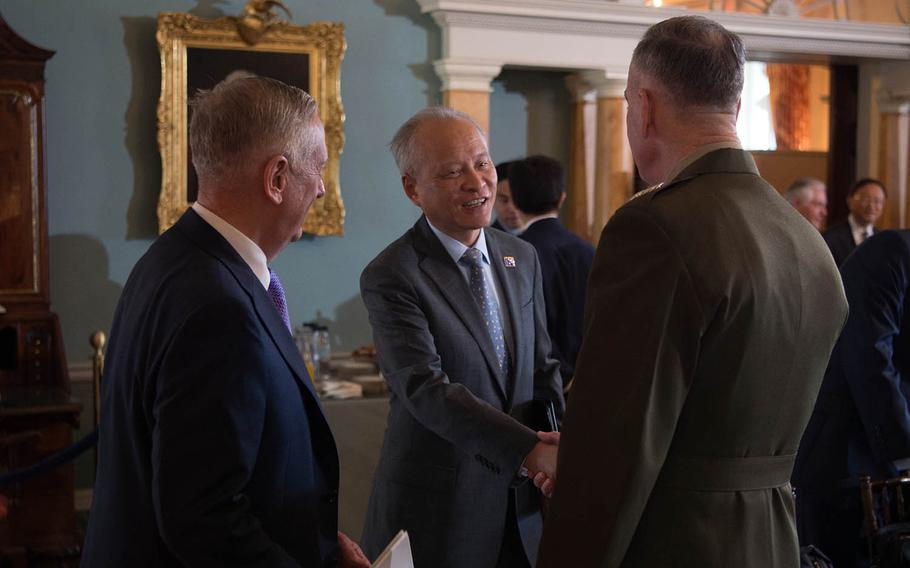 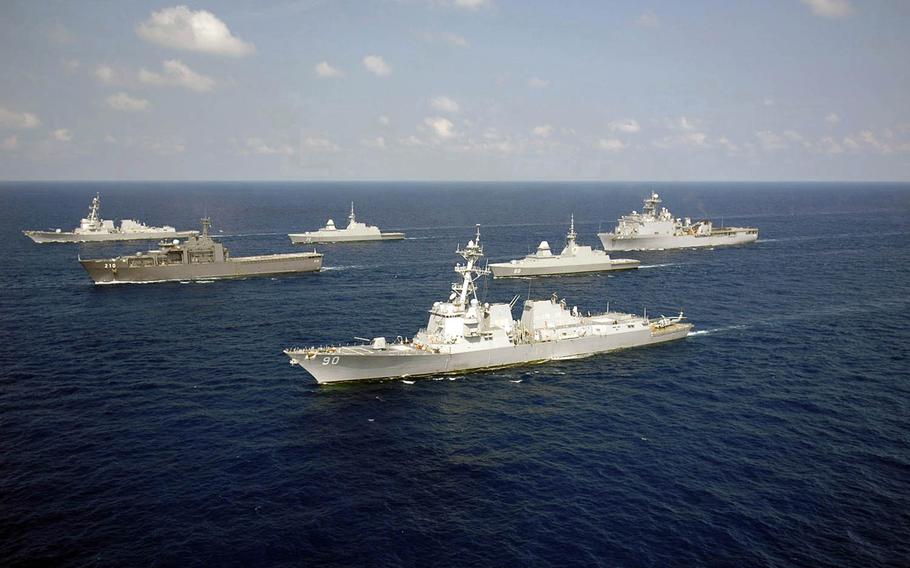 The guided-missile destroyer USS Chafee, foreground, sails with the USS Chung-Hoon and Singapore navy ships during past Cooperation Afloat Readiness and Training in the South China Sea. (Courtesy of the U.S. Navy)

The United States should butt out of territorial disputes in the South China Sea, a Chinese official said ahead of President Donald Trump’s inaugural visit to the region.

Ambassador Cui Tiankai told reporters at his embassy in Washington this week that the U.S. should allow China and its neighbors to agree on a code of conduct in those waters and settle their disputes in a “friendly and effective way,” The Associated Press reported Monday.

Other claimants include Malaysia, the Philippines, Vietnam, Taiwan and Brunei.

China has constructed military facilities in the Paracel and Spratly island chains. Both the Trump and Obama administrations have viewed that militarization as a threat to stability in the region.

“[Cui’s statement is] sending a message as Trump is starting his trip to Asia,” said Brad Glosserman, a visiting professor at Tokyo’s Tama University.

While the U.S. has not taken a position on those disputes, it has asserted the right of ships to freely transit the South China Sea, he said.

Beijing protested after the Navy destroyer USS Chafee sailed within 16 nautical miles of the Paracels on Oct. 10, calling the mission “dangerous” and a violation of China’s sovereignty. Secretary of State Rex Tillerson later said China’s “provocative actions” in the sea challenge international law and norms.

Cui’s statement echoes what the Chinese have been saying about the maritime disputes for years — outside parties should not get involved, Glosserman said.

Their goal is bilateral negotiations that would enable China, which dwarfs the other claimants, to bring maximum influence to bear, he said.

“If other countries believe they have the support of people like the U.S. they will take a stronger line,” Glosserman added.

America’s position is that the disputes should be resolved peacefully and equitably in accordance with international law, he said.

Last year, an international court rejected some of China’s territorial claims in a case brought by then-Philippine President Benigno Aquino. However, the Philippines hasn’t done much to enforce that judgment under new leader Rodrigo Duterte.

“I think it would certainly be better if others including the United States would not try to interfere in this constructive process, would not try to create obstacles to early agreement on the [code of conduct],” he said. “I think that this is our hope. This is also the hope of the [Association of Southeast Asian Nations] countries.”

Trump’s upcoming Asian tour, which includes a meeting with Chinese leader Xi Jinping in Beijing Nov. 8-9, comes at a “very important moment” and will build on progress made when Xi met Trump in Florida in April, Cui said.

Tensions over North Korea’s nuclear program could worsen without efforts to negotiate a solution, he said, adding that the issue will be a focus of the leaders’ talks.

Chui urged all parties to “refrain from doing anything that might escalate the tension,” AP reported.