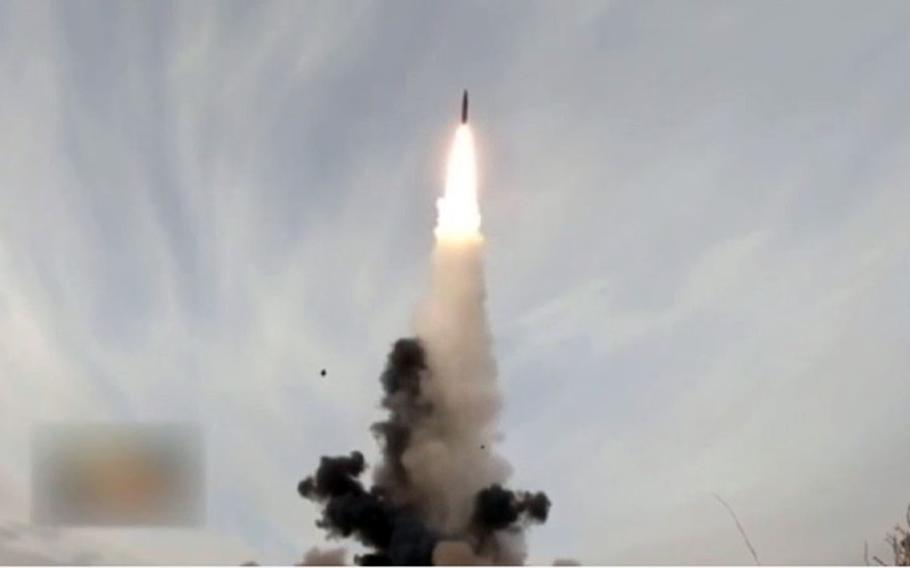 This still from a video broadcast by the state-run China Central Television shows the Chinese military test-firing a DF-26 anti-ship missile during a recent exercise in northwest China. (Screenshot via CCTV)

China has test-fired its so-called “Guam killer” ballistic missile, claiming the weapon could strike a moving aircraft carrier, according to a report by the state-run Global Times tabloid.

China Central Television on Thursday broadcast footage of the Chinese military launching a pair of DF-26 anti-ship missiles during a live-fire exercise in northwest China, according to a Sunday report by the newspaper.

The missile can carry conventional and nuclear warheads, and is capable of “both rapid nuclear counter-strikes and conventional medium-and-long range precision strikes,” Chinese defense ministry spokesman Senior Col. Wi Qian said at an April press conference, according to an official English translation of the transcript.

The missile has a “double-cone structure with four fin-like flight control surfaces symmetrically built around the base” meant to help control the weapon’s trajectory, the Global Times report said.

The report, which attributed its information to unnamed experts, said the demonstration disproved doubts raised by Western media about whether the DF-26 can hit a moving target.

However, the 40-second video did not show the missiles striking a target. It depicted only a crew from the People’s Liberation Army Rocket Force launching the rockets, which lifted off from mobile launchers, billowing black smoke and scattering rocks and other debris as they rose into the sky.

Analysts gave the DF-26 its foreboding “Guam Killer” nickname for its ability to strike targets 3,400 miles away, which is within range of Andersen Air Force Base.

China mobilized the missile after the USS McCampbell guided-missile destroyer on Jan. 7 sailed near the Paracel Islands in a freedom-of-navigation exercise. The Paracels are claimed by China; however, that claim is not recognized by international law.

The Thursday CCTV report came the same day the United States sent the McCampbell and fleet replenishment oiler USNS Walter S. Diehl through the Taiwan Strait on a freedom-of-navigation operation.

Chief of Naval Operations Adm. John Richardson has said China should not consider such actions provocative, but Chinese foreign ministry spokeswoman Hua Chunying on Friday used an analogy to explain Beijing’s discomfort with the passage.

“Suppose that a family has two courtyards … divided by a passage which could be used by passersby to come through for convenience’s sake,” Hua said in an official translation of her Friday press conference. “If there is someone who frequents this passage just to issue provocative words or make provocative moves … then how would you feel?”