China still on RIMPAC invite list, despite concerns from Congress 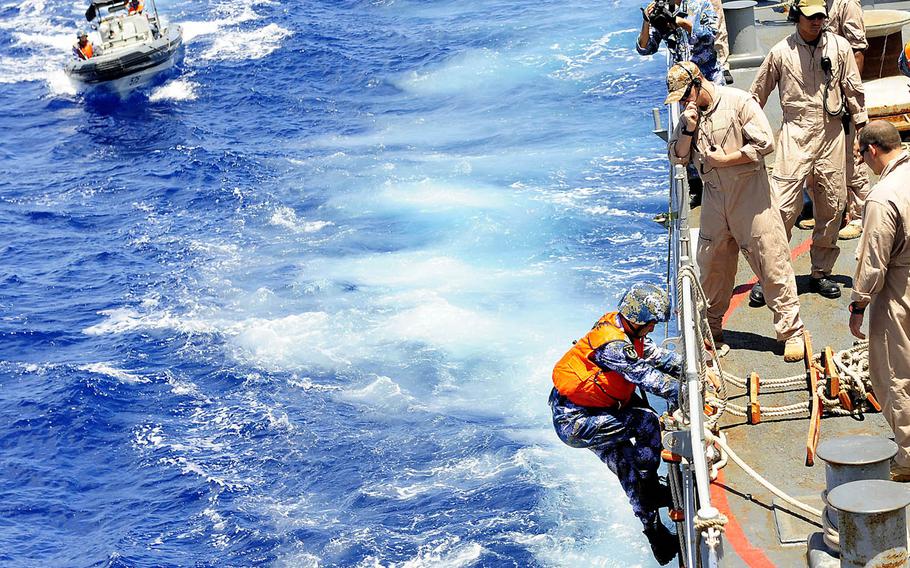 A Chinese sailor boards the guided-missile cruiser USS Port Royal as part of a drill during the Rim of the Pacific exercise on July 15, 2014. China has been invited to RIMPAC 2016, despite tensions with the United States over actions in the South China Sea. (Tiarra Fulgham/U.S. Navy)

A Chinese sailor boards the guided-missile cruiser USS Port Royal as part of a drill during the Rim of the Pacific exercise on July 15, 2014. China has been invited to RIMPAC 2016, despite tensions with the United States over actions in the South China Sea. (Tiarra Fulgham/U.S. Navy) Carter described China’s construction of military facilities and artificial islands atop reefs claimed by other nations in the Asia-Pacific region as behavior that isolated Beijing, during questioning by Congressman Mark Takai, D-Hawaii, at a House Armed Services Committee hearing on the 2017 defense budget.

Takai wants to exclude China from this summer’s Rim of the Pacific 2016, the world’s largest biannual naval exercise.

The exercise, which is primarily based in Hawaii, included 22 participant nations and six observer nations in 2014.

“We’re constantly evaluating our relationship with China and China’s behavior, including the South China Sea, where I emphasize we have very serious concerns about their aggressive militarization there,” Carter said.

Navy officials have repeatedly expressed wariness regarding China’s attempts to regulate freedom of navigation in the South China Sea, where about $1.2 trillion in U.S. trade transits annually.

China maintains an ambiguous claim to about 90 percent of the sea — including areas that most nations consider international waters — based on what it deems as historical claims.

Most recently, Navy officials pointed to Chinese military action at Scarborough Shoal, which lies within the exclusive economic zone of the Philippines, a U.S. security treaty ally.

“Should we reward China for this aggressive behavior by including them in an event meant for allies and partners?” Takai asked during the hearing. “China’s behavior is the polar opposite of U.S. objectives in the region.”

Takai’s position is similar to one expressed by Sens. John McCain, R-Ariz., and Jack Reed, D-R.I., in a 2015 letter to Carter calling for China’s exclusion from RIMPAC.

The letter called for “policy options that impose costs on China’s disruptive behavior, not reward it.”

Carter’s response then stated that China’s participation would allow the two navies to concentrate on “common security challenges,” such as piracy and terrorism, and build understanding that could tamp tensions in the region.

On Tuesday, Carter kept the door open for China to work with the United States.

China’s coast guard and quasi-military ships have engaged in disputes at sea — resulting in ships sometimes colliding — involving at least Vietnam, Japan, the Philippines and Indonesia in recent years.

The Chinese navy has also warned U.S. ships and aircraft transiting near Chinese-claimed territories. In 2014, the two navies agreed to the Code for Unplanned Encounters at Sea, which has since governed their rules for communication.

When the destroyer USS Lassen sailed near a disputed South China Sea territory last year during a freedom-of-navigation operation, the ship’s commanding officer described radio communication with the Chinese as professional.