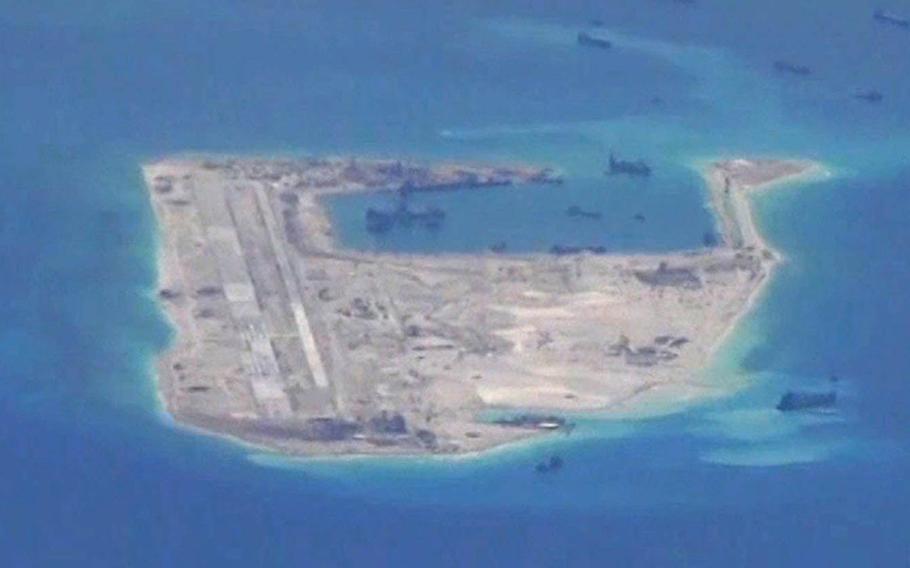 This photo from May 2015 shows a Chinese airstrip under construction at Fiery Cross Reef, part of the disputed Spratly Islands in the South China Sea. The artificial island now includes a military-capable airstrip, possible gun emplacements, radar towers, helipads and communications equipment, according to the Asia Maritime Transparency Initiative. (Courtesy of the U.S. Navy)

The destroyer USS William P. Lawrence sailed near a militarized reef claimed by China on Tuesday, the latest move by Washington to counter what it views as Beijing’s growing aggressiveness in the South China Sea.

China’s Defense Ministry said two fighter jets were scrambled and three warships shadowed the U.S. destroyer, according to the Reuters news agency, as it sailed inside 12 nautical miles of Fiery Cross Reef. The Spratly Islands reef is claimed by several nations.

“These excessive maritime claims are inconsistent with international law as reflected in the Law of the Sea convention in that they purport to restrict the navigation rights that the United States and all states are entitled to exercise,” Urban said in an emailed statement.

The ship, which belongs to the John C. Stennis carrier strike group, made one pass near the island as “innocent passage,” Urban added.

Innocent passage is a concept that allows ships to pass through any waters, including territorial waters, in accordance to the United Nations Convention on the Law of the Sea, which China has ratified and the Navy follows in practice.

It precludes “any exercise or practice with weapons of any kind,” as well as intelligence gathering, according to international law.

Some nations argue that innocent passage may not apply to military vessels without prior notice of their movement, which the U.S. rejects.

China often warns away foreign ships and aircraft when they approach parts of the South China Sea it considers sovereign — including vast swathes that the U.S. considers to be international waters and airspace.

Tuesday’s transit follows an overflight by U.S. A-10 aircraft in April near Scarborough Shoal, a disputed territory that China wrested from the Philippines in 2012. Other ships have undertaken operations, similar to the Lawrence’s, near the Spratly Islands in recent months.

China claims about 90 percent of the South China Sea based on what it deems historical rights.

The Philippines has challenged the “nine-dash line,” a border drawn around much of the sea on official Chinese maps, in the international Permanent Court of Arbitration.

A decision on the line’s legality, along with other issues, is expected in the next month or so, though China has stated it will not comply with the ruling.

China has topped Fiery Cross with 677 acres of landfill since 2014, according to the Asia Maritime Transparency Initiative, a project of the Center for Strategic and International Studies.

China has been involved in varying degrees of dispute in the South China Sea during recent years with Vietnam, the Philippines, Taiwan, Brunei, Malaysia and Indonesia.

In multiple cases, Chinese ships have fired water cannons and rammed fishing boats from other nations while asserting their claims.

The U.S. does not take a position on the sovereignty of the claims but has expressed concerns over China’s militarization of the islands, as well as what it views as Chinese attempts to limit Navy transit through international waters. About $1.2 trillion in U.S. trade passes through the sea annually, according to U.S. government figures.