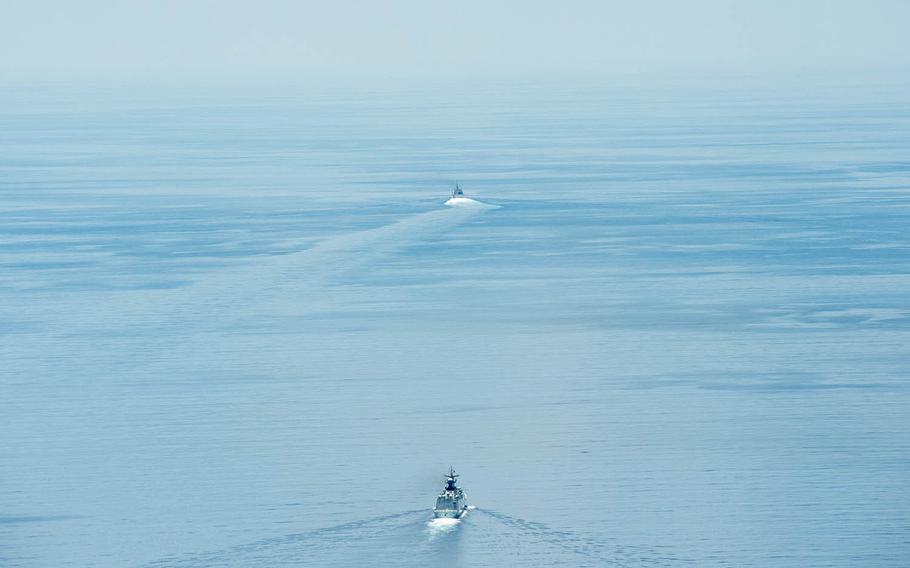 The littoral combat ship USS Fort Worth steams near the Spratly Islands in the South China Sea as the Chinese guided-missile frigate Yancheng sails close behind, May 11, 2015. (Courtesy of the U.S. Navy)

Just days before President Donald Trump’s arrival in the country Wednesday, China launched a colossal dredging ship dubbed the “magic island-maker” that could speed up the creation of artificial islands in the disputed South China Sea.

Adm. Harry Harris — head of U.S. Pacific Command and a vocal critic of Beijing’s efforts to build up and militarize these islets in the Spratly and Paracel chains — met with Trump Friday in Hawaii at the start of the president’s trip to Asia. Harris has referred to those islets, which were built up using sand dredged from the sea bottom, as China’s “great wall of sand.”

The new 460-foot dredging vessel, named Tiankun, was moved last week to waters off a shipyard in Jiangsu Province on the eastern coast near Shanghai, the state-owned China Daily reported Saturday. Engineers will now conduct tests of the ship, which can dredge almost 212,000 cubic feet of sand or clay in an hour in waters as deep as 40 yards.

The ship’s “cutter-suction” system can cut through solid rock, and its Shanghai-based designer, Marine Design and Research Institute, told China Daily that the ship is “a magic island-maker” because of its capability “to conduct coastal/channel dredging and land reclamation operations even in bad weather at sea.”

Tiankun — which is expected to be fully operational by June — will be able to dredge an area the size of a soccer field about a yard deep within an hour, the trade magazine Construction Global reported. The dredging system can pump material up to roughly 10 miles away.

China claims sovereignty over most of the South China Sea, an assertion disputed by neighboring nations that include Vietnam, the Philippines, Malaysia and Brunei. To bolster its claims and assert military dominance there, Beijing has constructed fighter jet hangars and surveillance arrays on the Spratlys' Fiery Cross, Subi and Mischief reefs, all of which were expanded through dredging, according to a report posted this summer on the Asia Maritime Transparency Initiative website, which is operated by the Center for Strategic and International Studies.