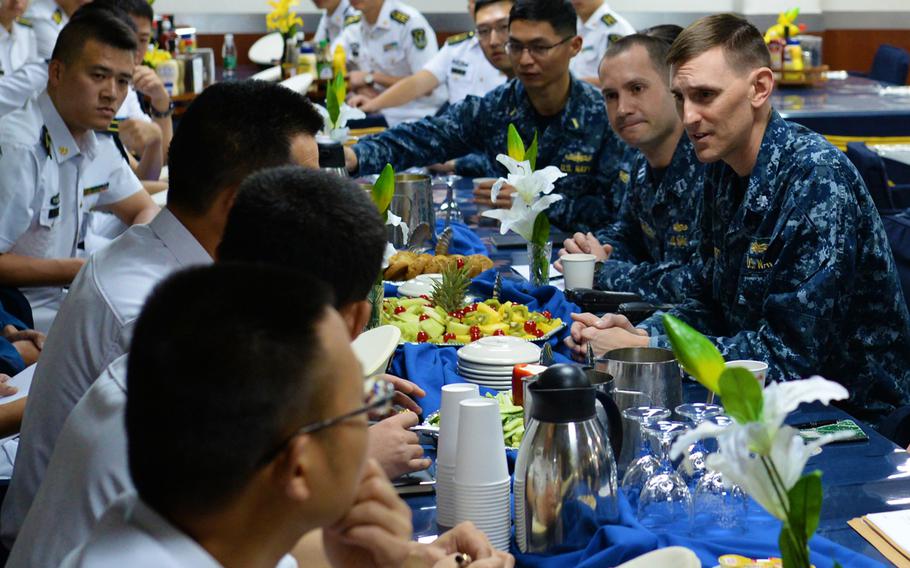 Cmdr. Nathan Fugate, right, executive officer of the U.S. 7th Fleet flagship USS Blue Ridge, plans a search-and-rescue exercise with Chinese naval officers aboard the ship while visiting Zhanjiang, China, on April 22, 2015. Researchers at the Shangri-La Dialogue security summit on Friday said that the U.S. and Chinese militaries may find converging interests when it comes to rescuing civilians in hostile regions of the world. (Samuel Weldin/U.S. Navy)

SINGAPORE — China’s rising interest in evacuating its citizens from hostile areas abroad could pave the way for cooperation with the United States and lead to a U.S.-style special forces capability, researchers said Friday.

While disputes over navigation rights and territory in the South China Sea have created tensions between Beijing and Washington, their interests may align in unstable areas where their nations’ respective companies operate, the researchers said.

Chinese economic expansion has left workers in the oil industry and other sectors in danger in places like South Sudan, Yemen and Pakistan in recent years, said Jonas Parello-Plesner and Mathieu Duchatel, authors of “China’s Strong Arm: Protecting Citizens and Assets Abroad.”

“There is room for cooperation with China on a convergence of interests,” Duchatel said. “It’s a way to circumvent the normative differences between China and the West.”

The authors spoke on the sidelines of the Singapore-hosted Shangri-La Dialogue, where several of the world’s top defense officials are gathered this weekend. China’s expanding military operations is expected to dominate discussion.

China has thus far only used the People’s Liberation Army to evacuate citizens under secure conditions, Parello-Plesner said. They prefer flying or ferrying their citizens out of a country. In March, China evacuated 629 Chinese and 279 foreign nationals from Yemen to Djibouti to escape an advance by Houthi rebels.

However, China could eventually use military operations to rescue hostages abroad, which only the U.S., Britain, France and Israel have experience doing, Duchatel said.

“It’s not out of the question that Chinese special forces could be involved in extractions in future operations,” Duchatel said.

For now, China hasn’t given any indication whether it has developed that capability.

Conducting special operations abroad against terror groups and paramilitaries requires a large investment in intelligence, surveillance and reconnaissance operations, as well as the tactical training to conduct the operations.

China’s government is typically risk-averse and maintains a policy of non-interference in other nations, the authors said. That philosophy contrasts with the profit-hungry, risk-prone stakes its businesses, many of which are state-owned, have been taking in the developing world in recent years.

China’s direct investment in foreign countries has gone from negligible in 2000 to more than $100 billion as of 2013, according to United Nations figures.

Those foreign stakes have even raised the idea of forming a “Chinese Blackwater,” where security contractors hired by the government protect Chinese foreign interests.

“Some people have been vocally in favor in that,” Duchatel said. “But I think the mainstream view is no need to change the law to support the emergence of a Chinese private security sector.”