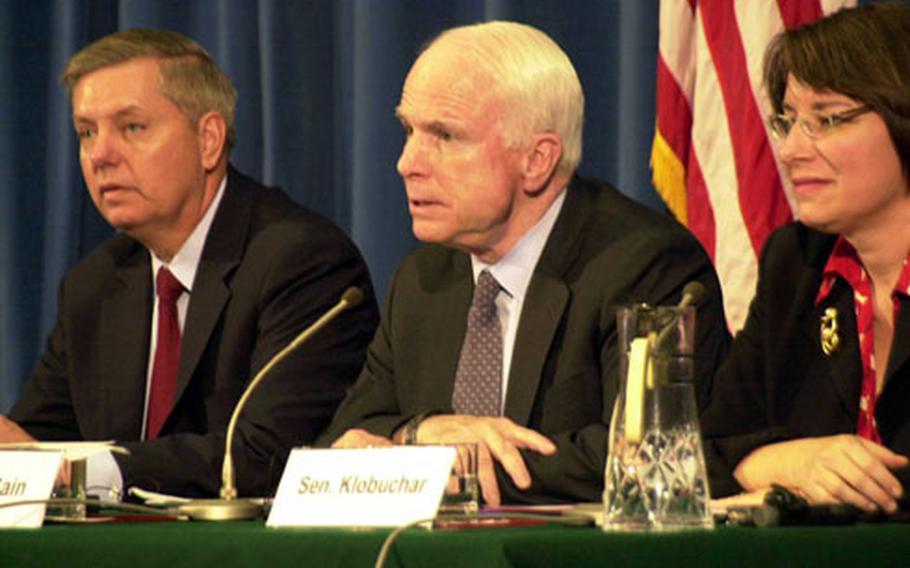 From left, U.S. Sens. Lindsey Graham, John McCain and Amy Klobuchar hold a news conference Friday during their trip to Japan. “The latest launch by the North Koreans is a direct violation of U.N. Security Council resolutions and against the norms of decent behavior as a citizen of the world,” McCain, R-Ariz, said. (Teri Weaver/Stars and Stripes)

TOKYO &#8212; China&#8217;s reluctance to strengthen sanctions against North Korea as punishment for its recent missile launch is disappointing and discouraging, Sen. Lindsey Graham said during a news conference at the U.S. Embassy in Tokyo on Friday.

"All roads, when it comes to North Korea, lead back to China," said Graham, R-S.C., who met with Chinese officials earlier in the week. "And I must say I was disappointed with the reception we received [in China] regarding U.N. sanctions."

Sen. John McCain, R-Ariz., was traveling with Graham and Sen. Amy Klobuchar, D-Minn., on a trip to China, Vietnam and Japan. At Friday&#8217;s news conference, McCain also spoke out against North Korea&#8217;s April 5 launch of a Taepodong-2 missile.

North Korea has maintained it launched a satellite into orbit as part of its space program. U.S. military officials have said part of the missile fell into the Sea of Japan, and the remaining portions fell into the Pacific Ocean.

"The latest launch by the North Koreans is a direct violation of U.N. Security Council resolutions and against the norms of decent behavior as a citizen of the world," McCain said.

McCain, the Republican candidate in the last presidential election and currently ranking minority member of the Senate Armed Forces Committee, said the launch was a key factor in his reserving judgment on President Barack Obama&#8217;s military budget proposal to scale back spending on missile defense.

"I believe that there is no more compelling argument for missile defense capabilities than what just happened with the North Korean launch," McCain said. Otherwise, McCain said, he supports the Pentagon spending proposals, which include scaling back some ship building and the production of the Air Force&#8217;s F-22.

By the end of the week, it appeared Japan and the United States could not get enough support from Russia and China for sanctions against North Korea, the Voice of America reported.

Instead, Japan on Friday extended its existing sanctions on the communist country for one year, according to a written statement from Chief Cabinet Secretary Takeo Kawamura. The sanctions limit imports from North Korea and port visits by the country&#8217;s ships, according to Jiji Press in Tokyo. Previously, Japan had renewed the sanctions every six months.

The new policy cut the amount of yen a person can carry into North Korea to 300,000 yen ($2,990) from 1 million yen ($9,975). Japan also lowered the cap on undeclared cash transfers between the two currencies.

While in Japan, the three U.S. senators were to visit a nuclear reprocessing facility and the USS John S. McCain at Yokosuka Naval Base. The ship, a destroyer, is named after McCain&#8217;s father and grandfather.