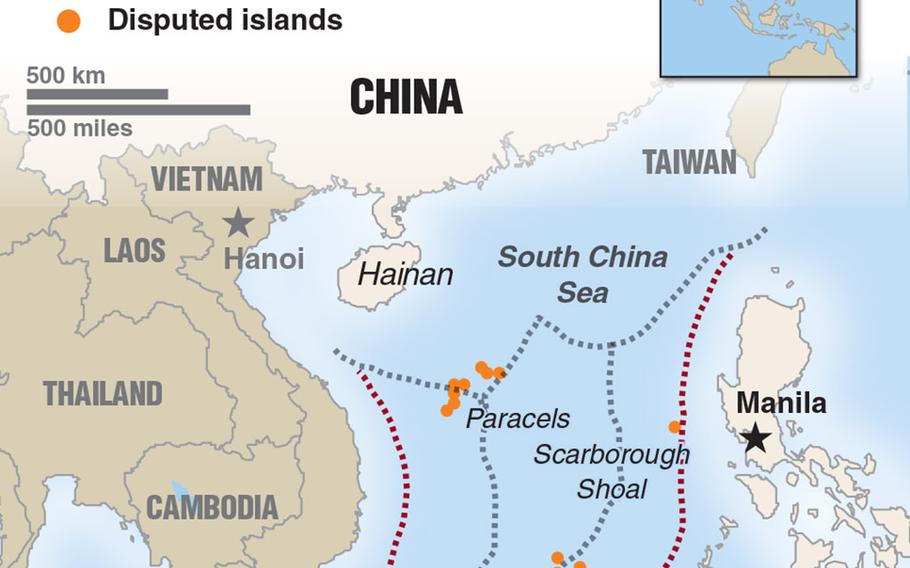 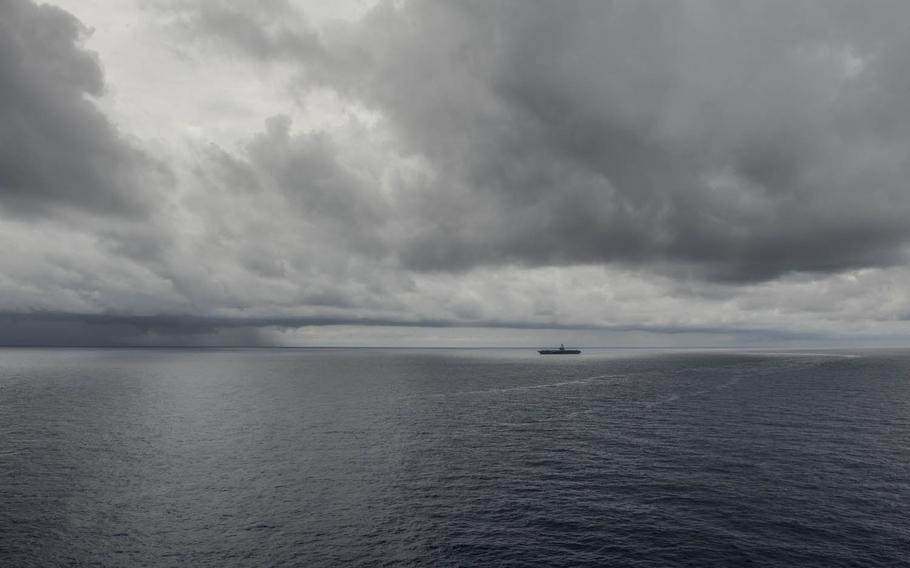 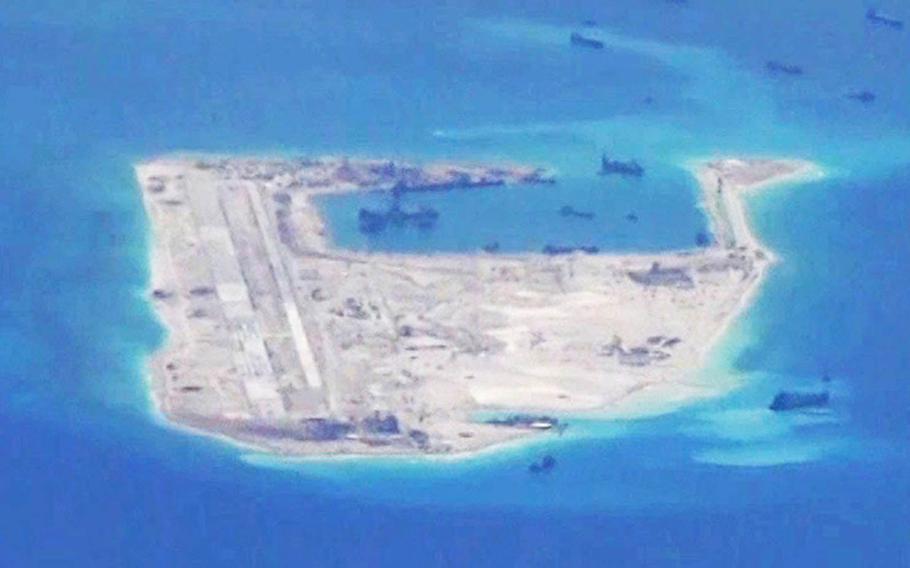 This photo from May 2015 shows a Chinese airstrip under construction at Fiery Cross Reef, part of the disputed Spratly Islands in the South China Sea. The artificial island now includes a military-capable airstrip, possible gun emplacements, radar towers, helipads and communications equipment, according to the Asia Maritime Transparency Initiative. (Courtesy of the U.S. Navy)

China’s actions in the South China Sea violate international law and prevent other nations from exercising their rights, an international court ruled Tuesday in a unanimous landmark decision that bolsters arguments by nations critical of Beijing’s military moves in the Asia-Pacific region.

The Permanent Court of Arbitration in The Hague ruled in favor of most of the Philippines’ claims against China, while determining that historical claims to 90 percent of the South China Sea — labeled “indisputable” by Beijing — had no legal justification.

“There was no evidence that China had historically exercised exclusive control over the waters of the South China Sea or prevented other States from exploiting their resources,” the tribunal wrote in a statement accompanying the 479-page ruling.

The court determined that all of the land in the Spratly Islands chain — where U.S. ships and aircraft have traversed in accordance under international law, despite Chinese warnings — are rocks, not islands.

The court doesn’t have jurisdiction to award the rocks to any one country, as China argued when it declined to participate in the case, which the Philippines first brought to the tribunal in 2013.

However, defining the land as rocks prevents China or any other country from claiming a 200-nautical-mile exclusive economic zone around them.

Subi Reef and Mischief Reef, which China has topped with landfill and military resources, are “low-tide elevations” and not claimable as land, the court also ruled.

John Kirby, State Department spokesman, said the U.S. expected China and the Philippines to comply with their obligations under the ruling, AP said.

In Manila, Philippine Foreign Secretary Perfecto Yasay called the ruling a “milestone decision” and affirmed the government’s commitment to “the peaceful resolution and management of disputes” in the region.

China has constructed military-grade runways and added radar stations and self-propelled artillery to reefs throughout the South China Sea. The U.S. Navy has sailed close by these artificial islands on freedom-of-navigations operations, under Chinese protest.

China’s ambiguous claims to 90 percent of the South China Sea, along with its waters and hundreds of land features — nearly of all which are too small to be called islands — conflict to some degree with claims by the Philippines, Malaysia, Vietnam, Taiwan, Brunei and Indonesia.

China’s sea claims also create conflict with positions maintained by the U.S., which insists on freedom of navigation for its ships and aircraft under international norms. About $5 trillion in trade sails through the sea annually, including $1.2 trillion in U.S. trade.

Reflecting past statements, Chinese state media said Beijing "does not accept or acknowledge" the tribunal. Chinese officials and media outlets sharply criticized the court in the week prior to the decision, with one spokesman labeling the ruling “a piece of trash” last week.

Xinhua, China’s official news agency, put out a story with a headline, “Law-abusing tribunal to issue award,” about five hours before the ruling was released.

Although China has ratified the U.N. Convention on the Law of the Sea — which includes a clause that allows nations to abide by the ruling of the arbitral tribunal — China has repeatedly stated it would ignore the ruling.

Nevertheless, China issued a position paper online, which the court considered in its deliberations, on whether it had jurisdiction to consider the case. The court ruled in 2015 that it did have jurisdiction.

The U.S. and the court have said that any decision is binding under international law, which China has also denied.

The arbitral court also criticized Chinese ships that "unlawfully created a serious risk of collision when they physically obstructed Philippine vessels" during encounters in the Philippines’ exclusive economic zone.

China took control of Scarborough Shoal, about 130 miles from the Philippine main islands, after a sea showdown in 2012. It has since prevented Philippine fishermen from accessing the area, which the court found unlawful.

Meanwhile, Chinese fishing vessels have harvested coral and other marine life from waters entitled to Philippine vessels under international law.

“China has inflicted irreparable harm to the marine environment, built a large artificial island in the Philippines’ exclusive economic zone, and destroyed evidence of the natural condition of features in the South China Sea that formed part of the parties’ dispute,” according to the statement that accompanied the court’s ruling.

Since the case was filed, the United States has signed a defense agreement with the Philippines that gives it use of Philippine bases near the disputed areas.

Although the case represents a victory for the Philippines, whose military strength is far lesser than China’s, it remains unclear how Manila will respond. Newly elected President Rodrigo Duterte said last week he is open to talks on sharing the resources of the Philippines exclusive economic zone with China.

Duterte’s comments contrast sharply with those of his predecessor, who compared China’s attempts to militarize the sea and block resupply of Philippine-occupied areas to Nazi Germany’s land grabs in the 1930s.

U.S. officials have repeatedly criticized China for what analysts term “salami slicing,” or taking small steps that don’t create a reason for war, but that add up to domination of one of the world economy’s most critical areas.

“China’s actions in the South China Sea are isolating it, at a time when the entire region is coming together and networking,” Defense Secretary Ash Carter said at a June summit in Singapore. “Unfortunately, if these actions continue, China could end up erecting a Great Wall of self-isolation.”

China has flipped U.S. arguments that they are destabilizing and militarizing the region back on Washington, using much of the same language. It has particularly criticized freedom of navigation operations, where the U.S. has transited within 12 nautical miles of Chinese-occupied reefs.

“Such activities by the U.S. are meant to make a show of force and to weaken the determination and will of China to protect national sovereignty and security,” Defense Ministry spokesman Col. Wu Qian told reporters June 30. “It is an act of militarization in the South China Sea and it endangers regional peace and stability.”