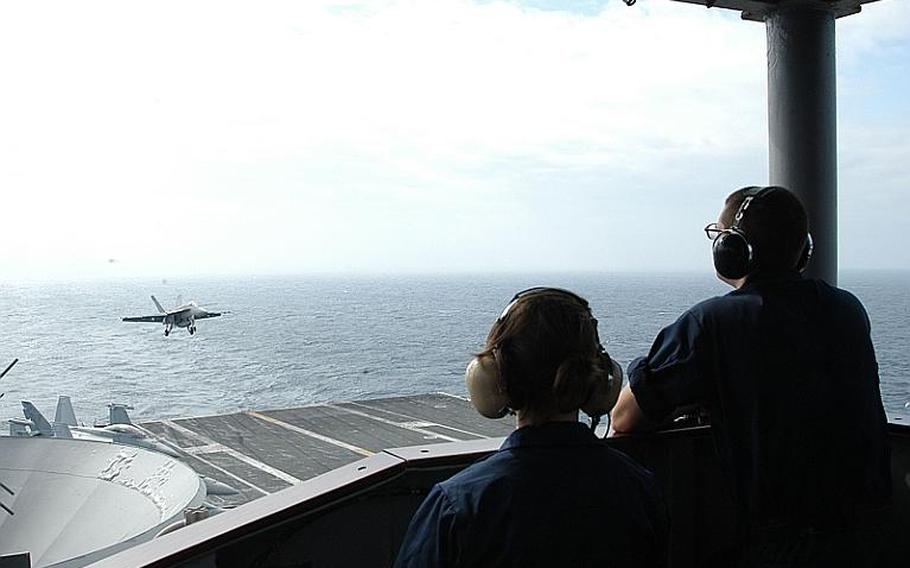 A fighter jet approaches the deck of the USS George Washington on Sunday as a couple of crewmembers look on. The George Washington has been in the waters around South Korea participating in separate exercises with the navies of Japan and the South. (Jon Rabiroff/Stars and Stripes)

A fighter jet approaches the deck of the USS George Washington on Sunday as a couple of crewmembers look on. The George Washington has been in the waters around South Korea participating in separate exercises with the navies of Japan and the South. (Jon Rabiroff/Stars and Stripes) 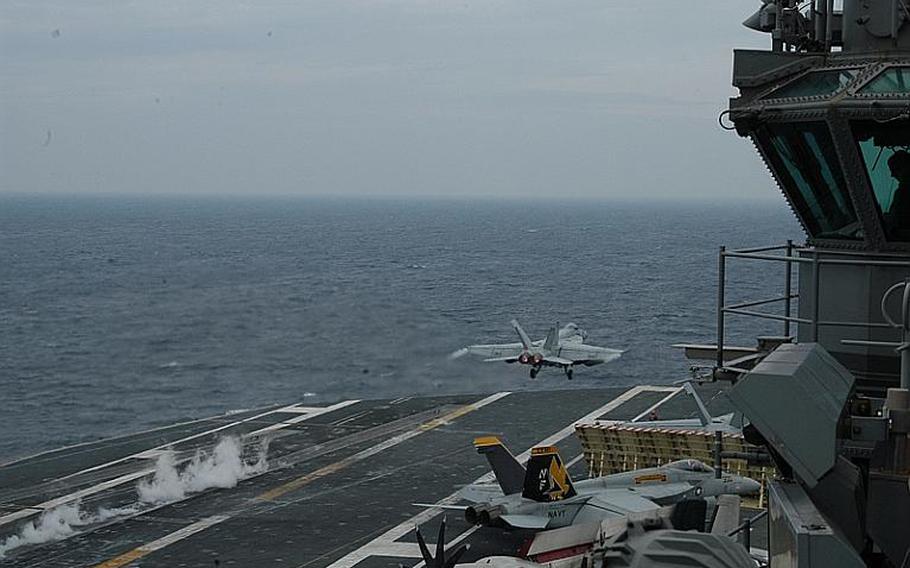 A fighter jet takes off from the deck of the USS George Washington on Sunday in the Yellow Sea, west of the Korean peninsula. The George Washington has been working with South Korea&#39;s navy during a three-day exercise that concludes Monday. (Jon Rabiroff/Stars and Stripes) 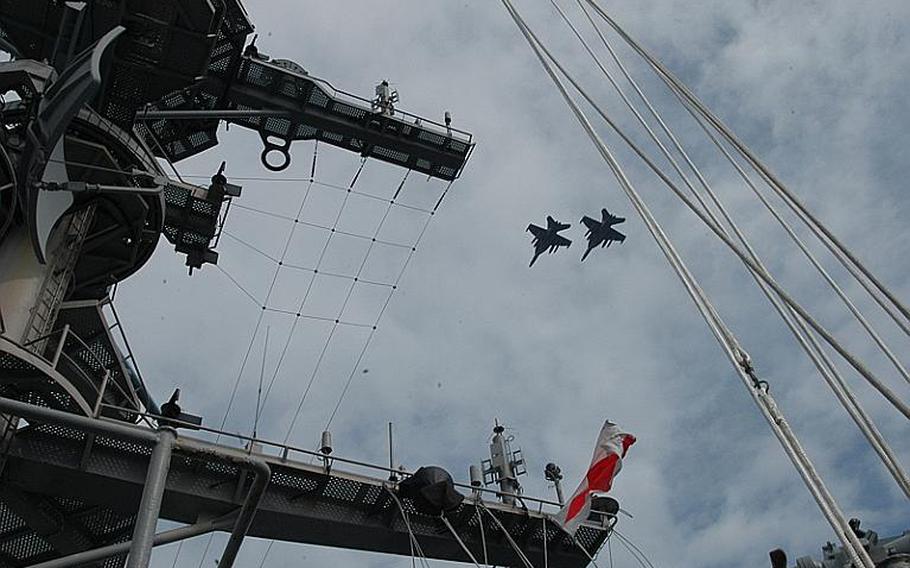 Fighter jets pass over the USS George Washington on Sunday during an exercise also involving the South Korean navy in the Yellow Sea, west of the Korean peninsula. (Jon Rabiroff/Stars and Stripes) 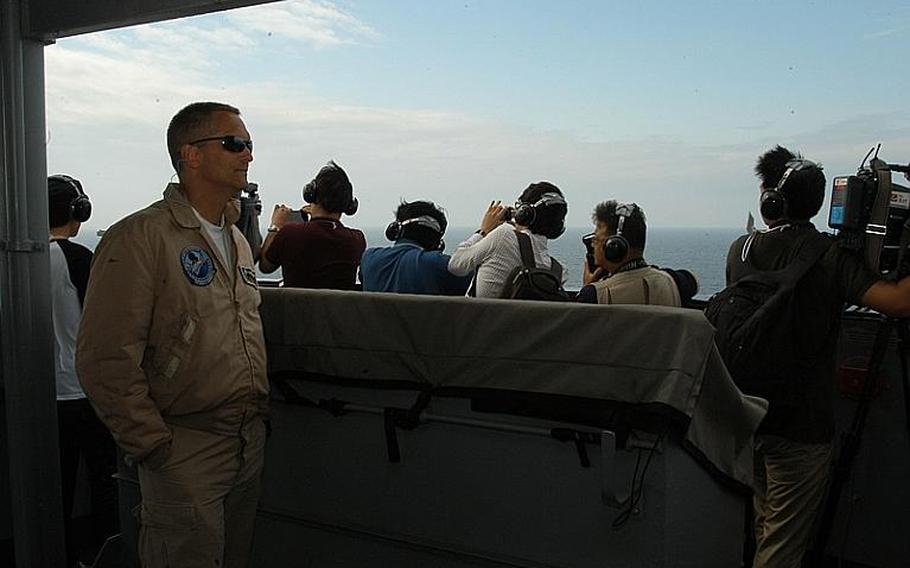 Capt. David A. Lausman, left, commander of the USS George Washington, takes in the action during Sunday&#39;s exercise with the South Korean navy in the Yellow Sea. Behind him, members of the media monitor fighter jet takeoffs and landings. (Jon Rabiroff/Stars and Stripes) 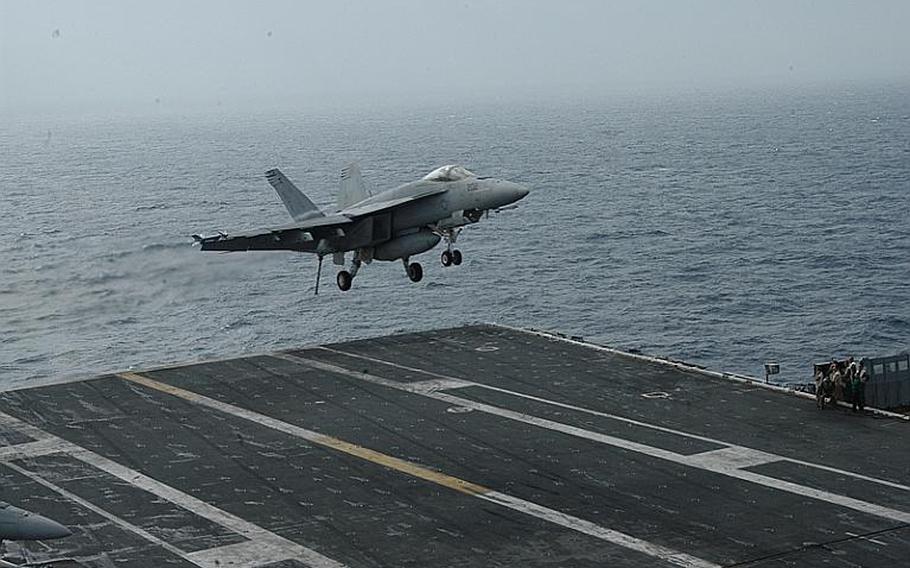 A fighter jet lands on the deck of the USS George Washington on Sunday during a joint naval exercise of the U.S. and South Korea in the Yellow Sea, west of the Korean peninsula. (Jon Rabiroff/Stars and Stripes) 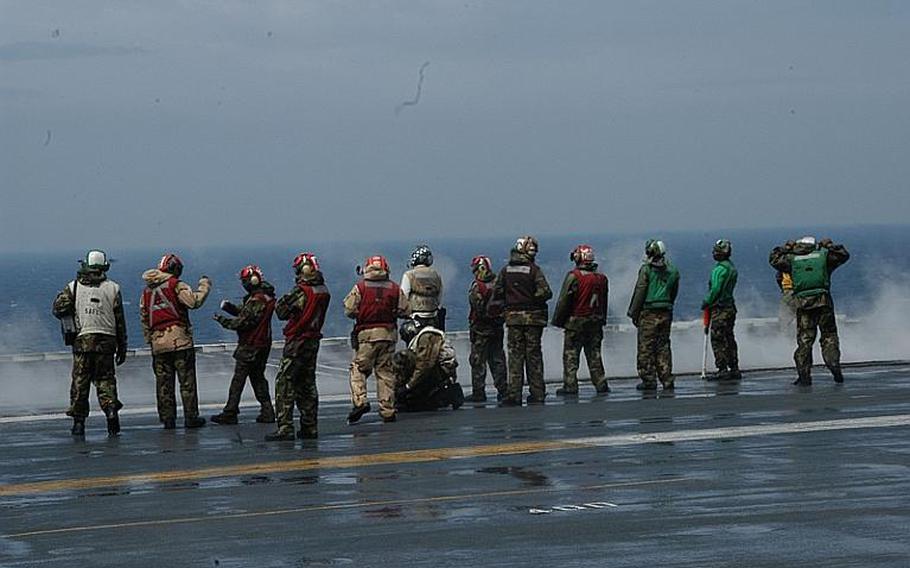 Smoke rises from the deck of the USS George Washington on Sunday after a fighter jet takes off. The aircraft carrier was in the Yellow Sea for a three-day joint exercise with the South Korean navy. (Jon Rabiroff/Stars and Stripes)

ABOARD THE USS GEORGE WASHINGTON &mdash; U.S. officials say the USS George Washington is in the Yellow Sea for exercises they describe as routine, but China and North Korea have expressed concern at the proximity to their territorial waters and analysts say the aircraft carrier&rsquo;s presence symbolizes the shift in U.S. military focus toward the Asia-Pacific.

The George Washington wrapped up a two-day exercise with the navies of Japan and South Korea last week south of the Korean peninsula. A three-day exercise is now under way west of the peninsula with ships from the South.

Reporters were flown onboard the George Washington on Sunday for a look at what the aircraft carrier and its striker group have been doing.

The Pentagon has said the exercises would not infringe on the territorial waters of any other countries in the region. But officials from China and North Korea have publicly expressed concern about having the massive ship so close to their coastlines.

&ldquo;China believes the international community, especially countries in the Asia-Pacific region, should contribute more to ensuring the peace and stability of the Korean peninsula, as well as the Northeast Asia region, not making things worse,&rdquo; China Foreign Ministry spokesman Liu Weimin was quoted earlier this month as saying in reference to the naval exercises.

North Korean media outlets reportedly warned last week that the U.S. and South Korea faced &ldquo;grave consequences&rdquo; if they continue what they termed provocative actions, like the exercises.

&ldquo;Even the slightest provocation on the peninsula may promptly lead to an all-out nuclear war between both sides,&rdquo; one said.

&ldquo;Dark clouds of a new war are thus hanging heavily in Northeast Asia including the peninsula,&rdquo; another said.

With the new U.S. defense posture focused more on the Asia-Pacific region, local analysts see the presence of the George Washington as a signal of that intent. But they also caution that a new Cold War could ensue from that policy.

&ldquo;The U.S. announced that it will maintain its influence on a global level,&rdquo; said Baek Seung Joo, a senior researcher with the Korea Institute for Defense Analyses&rsquo; Center for Security and Strategy in Seoul. &ldquo;Thus, the exercises look to be affiliated with the new U.S. defense strategy pivoted to the Asia-Pacific region.&rdquo;

Yang Mu-jin, a professor at the University of North Korean Studies in Seoul, said, &ldquo;The U.S. would like to keep its supremacy in Asia. I&rsquo;m worried a new Cold War &mdash; (with) the U.S., Japan and South Korea vs. China and North Korea &mdash; may be more and more set in,&rdquo; by the George Washington&rsquo;s recent presence off the Korean peninsula.

Pentagon spokesman Capt. John Kirby said last week that there was no great significance behind the two naval exercises, other than practice.

&ldquo;We&rsquo;re going to continue to look for opportunities to improve interoperability between us.&rdquo;

Those comments were echoed Sunday on the bridge of the George Washington by Capt. David A. Lausman, the ship&rsquo;s commander.

&ldquo;This is not about North Korea,&rdquo; he said. &ldquo;This is about two great navies with a rich, long tradition, working together again, improving our understanding of each other.&rdquo;

Asked what message the carrier&rsquo;s presence in the Yellow Sea was sending to North Korea and China, Lausman said, &ldquo;The message the George Washington sends is really the message that the crew sends &ndash; that we are here working &hellip; to increase the stability and the security of international waters.

&ldquo;This is nothing special or new that we&rsquo;re doing,&rdquo; he said. &ldquo;We have operated in the international waters around the Korean peninsula every year that we have been here. This is a standard routine for us.&rdquo;

South Korea&rsquo;s joint chiefs of staff announced that approximately 10 ships and submarines, 8,000 servicemembers and an assortment of aircraft are participating in the Yellow Sea exercise, west of the town of Taean, about 125 miles south of the maritime border of North Korea.

The officials reportedly said that during the exercise, the two navies would practice how they would track a North Korean long-range missile if one were launched, as well as finding and destroying North Korean submarines.

On Sunday, with close to two dozen media representatives looking on, a steady stream of warplanes took off and landed on the deck of the carrier, as dozens of crewmen scurried around in coordinated chaos.

This is not the first time the George Washington has sailed into controversy off the Korean peninsula. In 2010, the aircraft carrier was sent to participate in exercises in the wake of North Korean attacks on a South Korean warship and border island, incidents that left 50 people dead.

U.S. officials said the carrier&rsquo;s presence at the first exercise in the Sea of Japan &mdash; known to Koreans as the East Sea &mdash; was &ldquo;designed to send a clear message to North Korea that its aggressive behavior must stop.&rdquo;