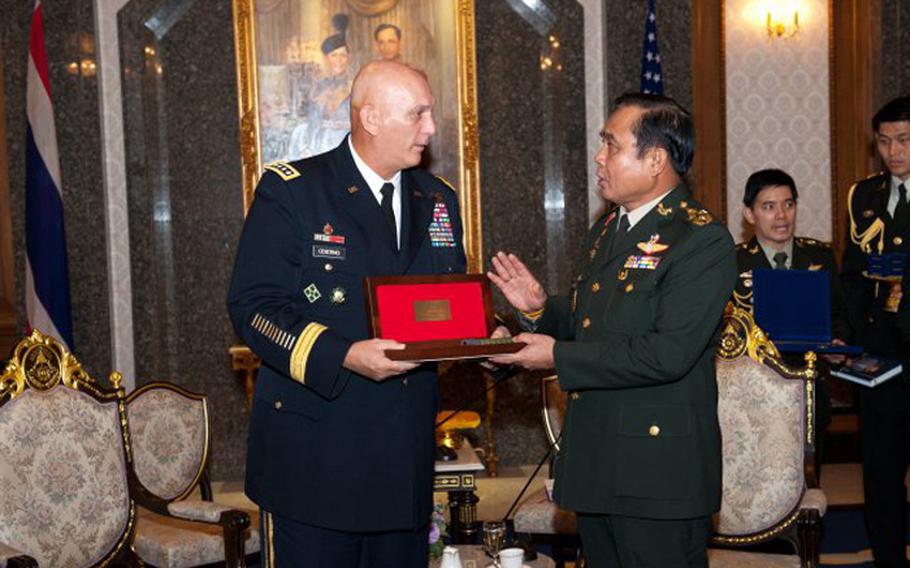 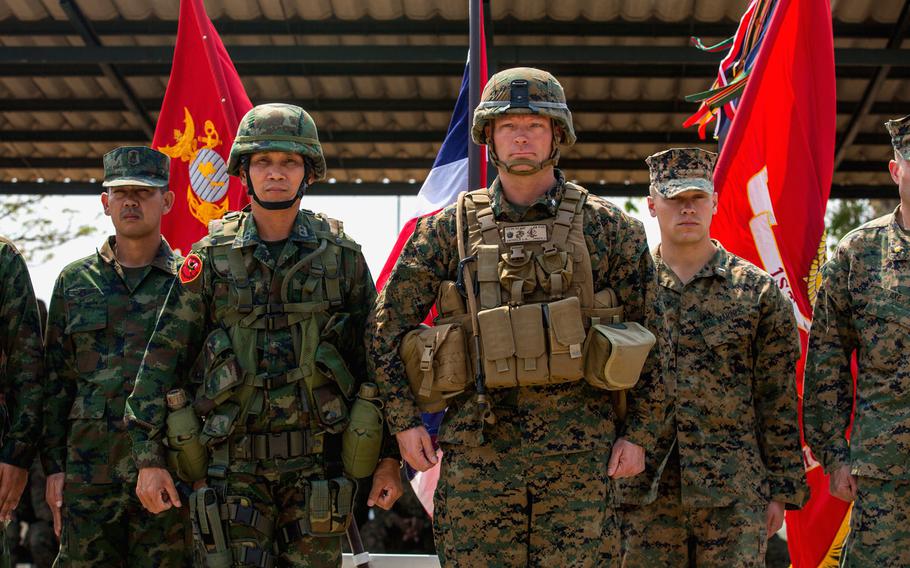 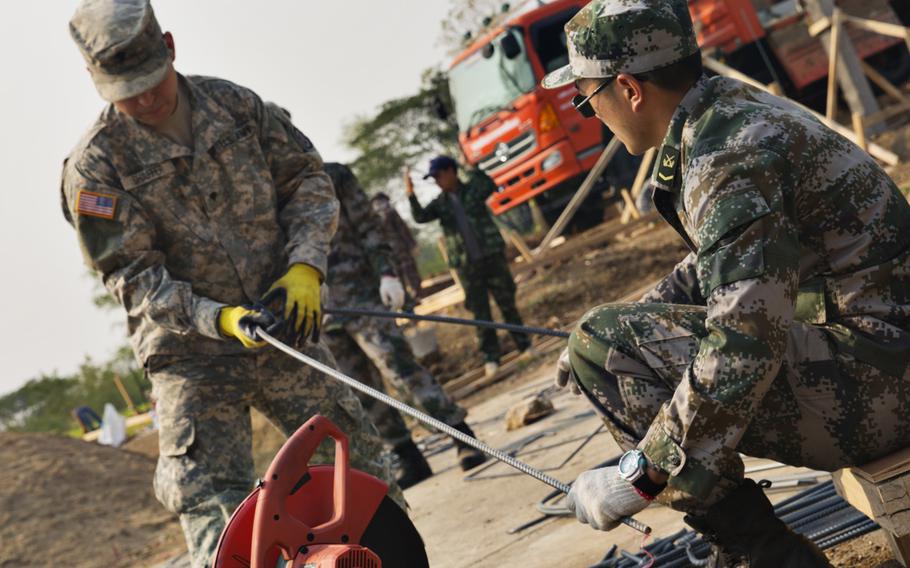 A U.S. Army soldier taking part in Cobra Gold 2015 hands a steel rod to a Chinese soldier during construction of a school in Chai Badan District, Thailand, on Jan. 24, 2015. A 2014 military coup in Thailand has splintered relations with the U.S., and some experts say that China is more than willing to step in and fill the void. (U.S. Marine Corps) 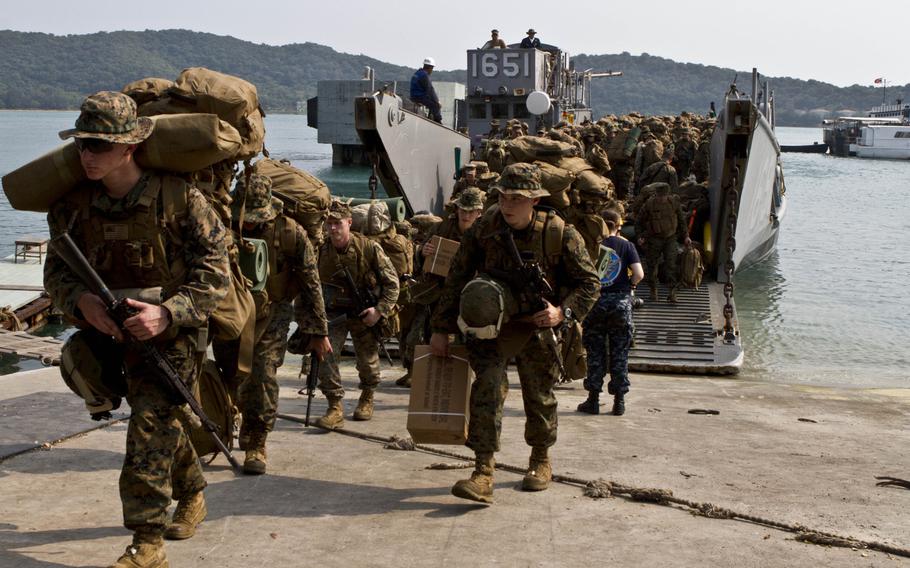 Marines and sailors from the 31st Marine Expeditionary Unit step off of a landing craft during their arrival for Cobra Gold 2013 exercise in Thailand. Before 2014's military coup in Thailand, the exercises were among the largest in the Pacific, but last year's training was truncated, and it's unclear what's in store for 2016. (U.S. Marine Corps) 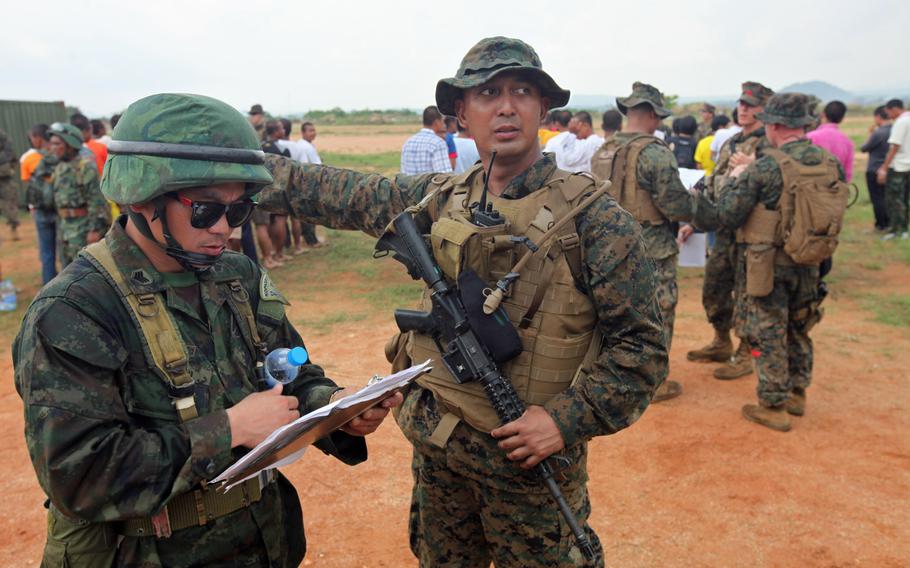 America’s alliance with Thailand — its oldest treaty partner in Asia — is splintering as a result of blinkered diplomacy over the year-old military coup there, say two former U.S. military officers with long experience working in that country. And they warn that China is quickly filling the void.

“The American approach has caused more damage than good at this point,” said Kerry Gershaneck, an associate at the East-West Center in Honolulu.

“America can adhere to its principles — and most effectively imbue our values of freedom and democracy — by engaging our Thai allies at high levels during this troubled time,” said Gershaneck, a former Marine Corps colonel with extensive academic and military experience working with the Royal Thai Armed Forces.

“Respectful engagement” will be key in resuming cordial relations with Thailand once democracy is restored. “But we will have little chance to influence Thailand’s current or future leaders if we abdicate the ideological battlefield to China — an expansionist, coercive and manipulative dictatorship,” he said.

A military junta led by Gen. Prayut Chan-o-cha overthrew the civilian government in May last year after months of violent political riots left about 30 dead and hundreds injured.

The U.S. soon found itself in a dilemma over whether to participate in the venerable bilateral Cobra Gold exercise after the junta announced it would push back planned elections to 2016. A scaled-back Cobra Gold was held in February, with both countries scrambling to put the best possible spin on the retreat.

Cobra Gold 2016 could be even thornier.

“It would be extremely difficult for the U.S. to go forward with a regular Cobra Gold and other forms of cooperation if it starts to look like that deadline will also slip,” said Gregory Poling, a Southeast Asia expert at the Center for Strategic and International Studies in Washington, D.C.

The U.S. has not had an ambassador in Thailand since Kristie Kenney departed in November.

The military and political history leading up to the coup is complex, tracing back to a previous coup in 2006 in which Prime Minister Thaksin Shinawatra was ousted and went into self-imposed exile. In the almost decade since then, two factions aligning themselves for and against Thaksin have dominated the country’s politics and military.

Central to the unrest is the issue of succession of Thailand’s revered king, 87-year-old Bhumibol Adulyadej, who has reigned since 1946 but is in poor health. His son and heir apparent, Maha Vajiralongkorn, is expected to assume the throne, but the anti-Thaksin faction is leery of the prince’s reported business ties with the former prime minister, who still wields considerable power.

The U.S. has censured the military for the overthrow, as it did in 2006 and previous coups.

But Gershaneck and John M. Cole, a retired Army foreign area officer with 15 years of experience in Thailand, say the U.S. style of condemnation this time around is backfiring.

“My key point is that America has to be much more visionary and much more adept at dealing with this situation than it has been,” Gershaneck said, quickly pointing out that he is not defending military dictatorship.

“I’m saying if you want to be effective and bring people back, you understand their psychology, their culture, their history.”

Many Thai military officers and civilian elites view the State Department’s attitude toward the country as “hypocritical, arrogant and indifferent,” he said.

The claim of hypocrisy rises from the Thai perception of a muted U.S. response to the military coup in 2013 in Egypt and, more recently, the announcement by the Obama administration that it would seek normalized diplomatic relations with Cuba after a half-century of sanctions.

Thais point out they fought beside Americans during the Korean War and Vietnam War, during a 30-year domestic communist insurgency and during the post-9/11 war on terror, Gershaneck said.

Through that same period, Cuba’s Castro regime has been trying to undermine America policy, Gershaneck paraphrased the attitude of many Thais, yet now the U.S. is willing to accept that regime as legitimate — while demanding that Thailand immediately return a civilian government.

Many Thais were particularly galled by comments in January by Daniel Russel, U.S. assistant secretary of state for East Asia and Pacific affairs, at a Thai university concerning the junta’s crackdown on free speech and the impeachment of the deposed prime minister.

In the wake of this, China has moved to shore up its existing military-to-military relationships with its southern neighbor.

“[China] is leaning forward on tightening a very small mil-to-mil relationship they’ve had with the Thais into something that’s much bigger,” Cole said. “They’re waiting for us to commit hari-kari or self-immolate or do something really stupid to cause the relationship to be ended — much to the chagrin of the people who look at the strategic lineup in Southeast Asia.”

“China is offering them massive amounts of military aid, education, training and equipment at the same time that the US is cutting off a relatively miniscule amount, about $3 million to $4 million, but in a symbolic act that American diplomats keep rubbing the Thais’ faces in,” Gershaneck said.

In February, China and Thailand announced a five-year agreement to expand mil-to-mil cooperation. China’s defense minister has stressed in public statements that Beijing has no interest in “interfering” with Thai military control.

This week, the Thai defense minister visited China, his second visit in six months, according to the Bangkok Post. Accompanying the defense minister for the first time were all the military’s top commanders.

Gershaneck said one of the most important long-term elements of the five-year agreement is an increase in military education and training from China.

“Because that’s how you build the relationship military-to-military,” he said. “That ability to educate and influence the thinking of officers for generations to come. You bring the young lieutenants and cadets in, and years later, they’re the generals. That’s how in the past the U.S. has been able to use soft power as part of our military power to inculcate ideas of democracy, the very legitimate ideals we have of civilian control of the military.”

“I think it’s perfectly reasonable to expect Thailand and its immediate neighbors to forge closer defense ties with China,” said Poling with CSIS.

“When you look at the agreement, though, it is not even approaching the scope or scale of U.S.-Thai mil-to-mil relations. Yes, Thailand is going to continue to ease closer to China. I don’t see us in immediate threat of being displaced as Thailand’s top security partner any time soon.”

Joshua Kurlantzick, a senior fellow for Southeast Asia at the Council on Foreign Relations, said claims that Thailand is swapping out military relations with America for China are “overstated.”

Gershaneck and Cole, however, say the harm is here and now.

“It’s not an exaggeration to say the alliance is splintering,” Gershaneck said, based on what he’s heard directly from Thai military officers in the past half year.

Such a fissure will usher in a Pacific rebalance, but not the kind envisioned by the Obama administration, he said.

“There will be a rebalance, but it will be against America’s interests in the region because we’ll have lost our alliance in everything but name,” he said.