China loses big in court, but enforcement is another matter 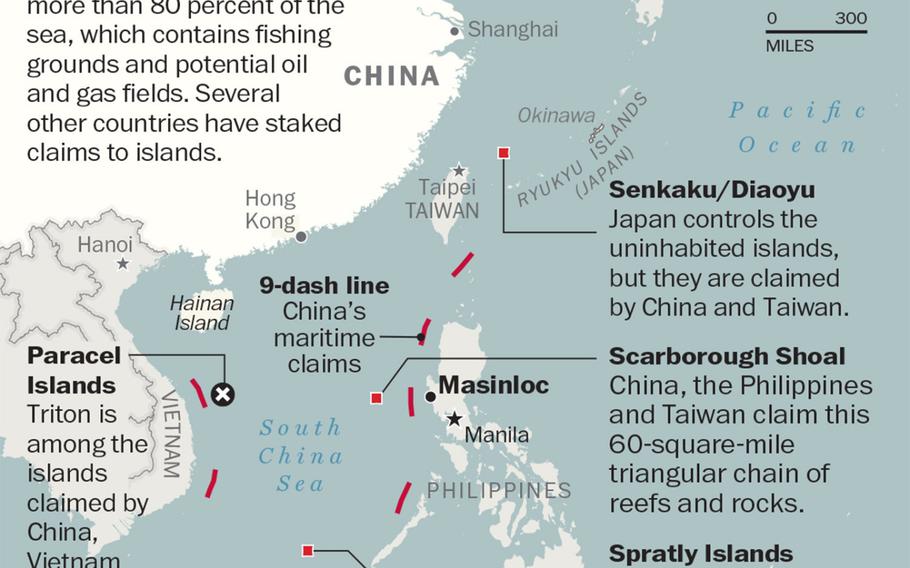 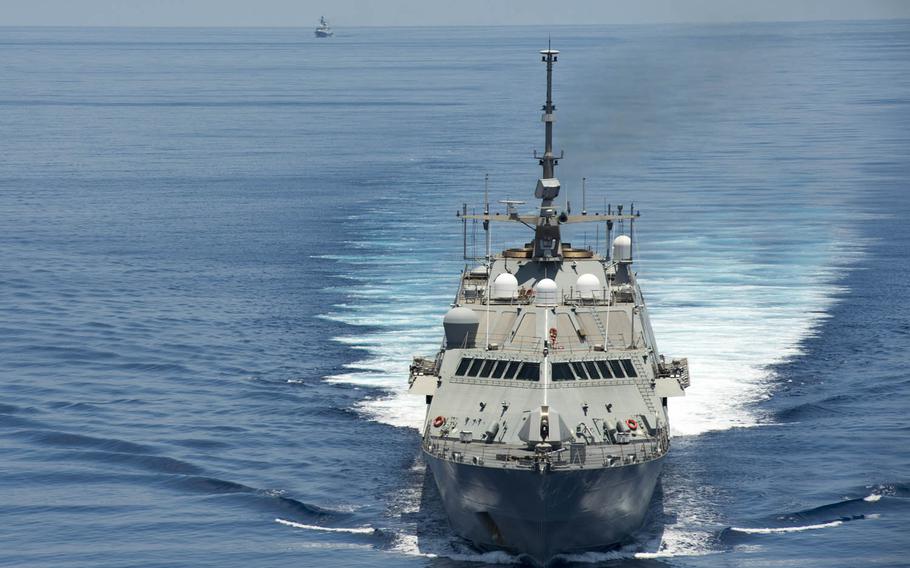 The littoral combat ship USS Fort Worth patrols near the Spratly Islands in the South China Sea in 2015 as the Chinese guided-missile frigate Yancheng transits close behind. (Conor Minto/U.S. Navy) 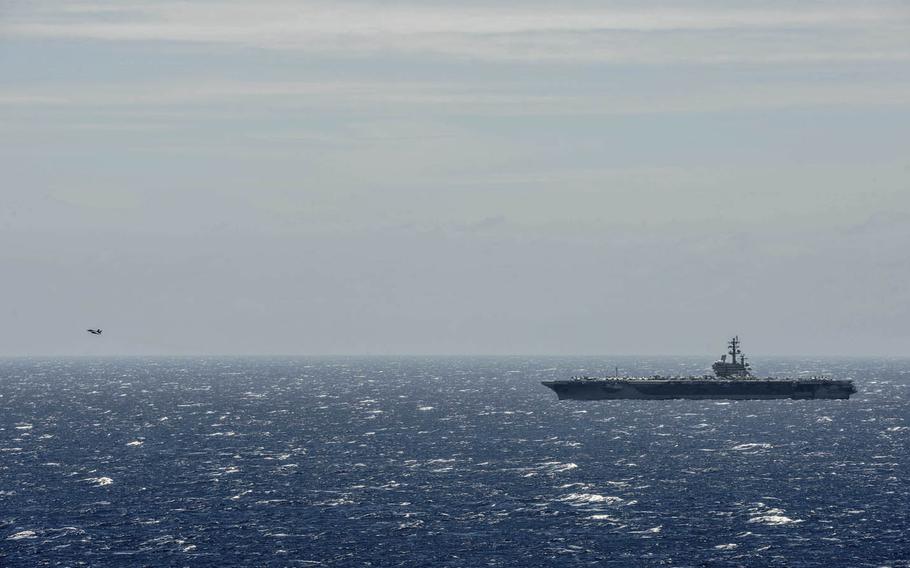 An F/A-18 Super Hornet launches from the flight deck of the USS Ronald Reagan in the South China Sea, July 7, 2016. (Nathan Burke/U.S. Navy)

Now that a world court has definitively ruled China’s aggressive actions in the South China Sea illegal, here comes the hard part: getting China to abide by the ruling.

Multiple analysts agreed Wednesday that expanded U.S. freedom-of-navigation operations in the South China Sea could play a part, but that diplomatic resolve within the Asia-Pacific region is critical to change Beijing’s behavior.

China has stated since the case began in 2013 that it would not recognize the verdict delivered Tuesday by the Permanent Court of Arbitration in The Hague, which found in favor of the Philippines on 14 claims, and said it lacked jurisdiction on one other claim.

The 479-page decision backs up what the U.S. and most of the world’s legal analysts outside of China have long stated:

China has no right to build artificial islands with military outposts on underwater reefs inside the exclusive economic zone, or EEZ, of other nations. Beijing can’t use an ambiguous map feature covering 90 percent of the sea, known as the “nine-dash line,” to claim other countries’ EEZs as its national waters. China’s argument that it holds “historical rights” to the sea carry no weight under law, and if they could have, China ceded them when it ratified the U.N. Convention on the Law of the Sea. The ruling theoretically shuts down China’s claim to control a body of water where $5 trillion in seaborne trade transits annually, including $1.2 trillion in estimated U.S. trade.

Chinese officials dismissed the verdict Tuesday as “null and void,” despite statements from Washington, Tokyo and other governments noting that international law binds China to accept the agreement.

Vice Foreign Minister Liu Zhenmin said China could declare an air defense identification zone over its claims in the South China Sea if it felt threatened. China set up such a zone in 2013 over disputed islands in the East China Sea, although the U.S. and others refuse to recognize it.

However, China may find that curtailing its most assertive actions, including building militarized artificial islands and firing water cannons at neighboring nations’ fishing vessels, may better suit its long-term goals.

“This goes to China’s intent of how it wants to be seen in the world as a superpower and the kind of world it would like to see emerge — is it going to be the ‘rules of the road,’ or ‘might makes right?’” asked Richard Fontaine, president of the Center for a New American Security, in a conference call with reporters Wednesday.

Last year, a Foreign Ministry spokeswoman told the Philippines during a news conference that “small countries shall not make trouble willfully and endlessly.” The comment drew comparison to a 2010 statement at a summit by former Foreign Minister Yang Jiechi: “China is a big country and other countries are small countries, and that’s just a fact.”

Western analysts talk of China’s obligations under international law. Within China, the discussion is different.

The South China Sea conflict is viewed through the lens of what China calls “The National Century of Humiliation,” a period between the mid-19th and 20th centuries when Britain, Japan and other foreign powers picked away at China’s territorial integrity.

When China talks about its historical rights, it is harkening back to a history where it was the dominant political and cultural player in the region. It is a position Chinese have been taught to view as their nation’s rightful place.

China’s claims in the South China Sea were always more emotional than historical, wrote Bill Hayton, author of “The South China Sea: The Struggle for Power in Asia,” after Tuesday’s ruling.

“To those Chinese who care about the issue, the arbitration will appear as yet another episode in the story of national humiliation,” Hayton wrote. “If we could trust the Chinese leadership to allow the free flow of information and an open debate about history, we could hope for a new understanding to emerge.

“For the time being, that is about as likely as China dismantling its giant artificial islands.”

Vietnam, Malaysia, the Philippines, Taiwan, Brunei and Indonesia all have conflicts over land or water with China. None of them can match China’s military, and each maintains close economic ties.

As China incrementally asserted control of the South China Sea in recent years, each protested, but without a unified voice.

“What the ruling does do is allow countries to stand up for the rules, not against China or for the United States,” Fontaine said.

The U.S. spoke out in recent years but did not undertake a freedom-of-navigation operation to challenge China’s claims for about three years, until resuming them last year.

Even then, the U.S. has limited the Navy to “innocent passage,” where a ship comes within 12 nautical miles of claimed territory and then leaves.

The ruling declared multiple artificial islands built by China to be built on non-claimable, underwater reefs — and therefore, the nearby waters to be international.

The Navy could conduct military operations in these waters, a more forceful step advocated by Sen. John McCain and others in Congress.

This ruling gives Washington the “green light” to do that, Fontaine said. However, it’s difficult to say whether an exiting U.S. administration would pursue the more aggressive option, given the many other priorities in dealing with China.

Should China remain obstinate over an international ruling, it wouldn’t be without precedent, said Linda Jakobson, author and visiting professor at the U.S. Studies Centre at the University of Sydney.

The International Court of Justice ruled in favor of Nicaragua after the U.S. mined the formerly communist nation’s harbors in the 1980s. The U.S. dismissed the ruling.

“It’s yet another indication that China has decided to behave like a great power,” Jakobson said.