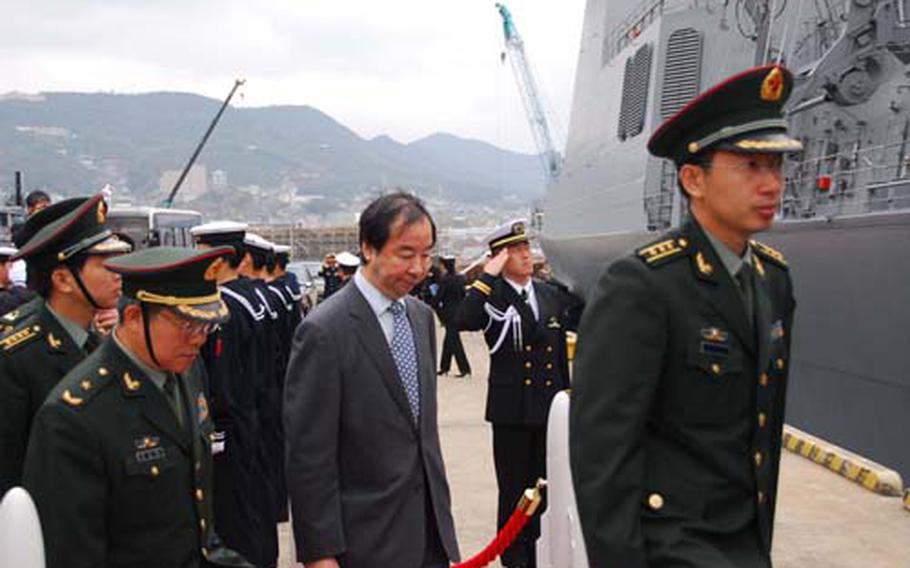 Officers from China’s defense ministry board the Japanese destroyer Chokai at Sasebo Naval Base on Monday. The warship is equipped with the U.S.-developed Aegis weapons system, which gives the U.S. an edge over China’s rapidly developing missile program. (Travis J. Tritten / S&S)

The Japanese navy invited Chinese Defense Minister Liang Guanglie and an entourage of ministry officials onto the base for a tour of the destroyer Chokai, which is equipped with the Aegis system and docked in Sasebo with U.S. warships.

The United States has shared the technology with its ally Japan and both countries depend on the ship-based Aegis systems for an edge over Asian threats, including China&#8217;s burgeoning missile programs.

China&#8217;s tour of the Aegis destroyer was limited to the deck and the bridge to maintain security, the Japan Maritime Self-Defense Force said Monday.

Meanwhile, the U.S. Navy was conspicuously absent from the high-level visit to one of its key bases in the Pacific region, which it shares with the Japanese navy.

Beyond arranging for the defense minister&#8217;s arrival, the U.S. did not work with the Japanese to coordinate the visit to Sasebo, said David Marks, a U.S. embassy spokesman in Tokyo.

The embassy would not comment on whether the visit raised any security concerns. U.S. Forces Japan refused to comment and directed all questions to the embassy.

The group of Chinese officials traveled through the U.S. Navy base by motorcade and spent about 90 minutes aboard the destroyer, Japanese defense ministry spokesman Masashi Maegata said.

Navy security was increased around the base during the visit and U.S. sailors were stationed at intersections along the defense minister&#8217;s motorcade route.

For Japan, the visit by Liang was a sign that long-held tensions between the two Asian countries might be thawing despite Tokyo&#8217;s concern about Chinese military growth in recent years.

Liang and his Japanese counterpart, Defense Minister Toshimi Kitazawa, agreed to joint military training between China and Japan during Liang&#8217;s six-day visit, according to Reuters.

But Kitazawa and Prime Minister Yukio Hatoyama also took the opportunity to press China for more transparency in its military spending during meetings in Tokyo, the wire service reported.