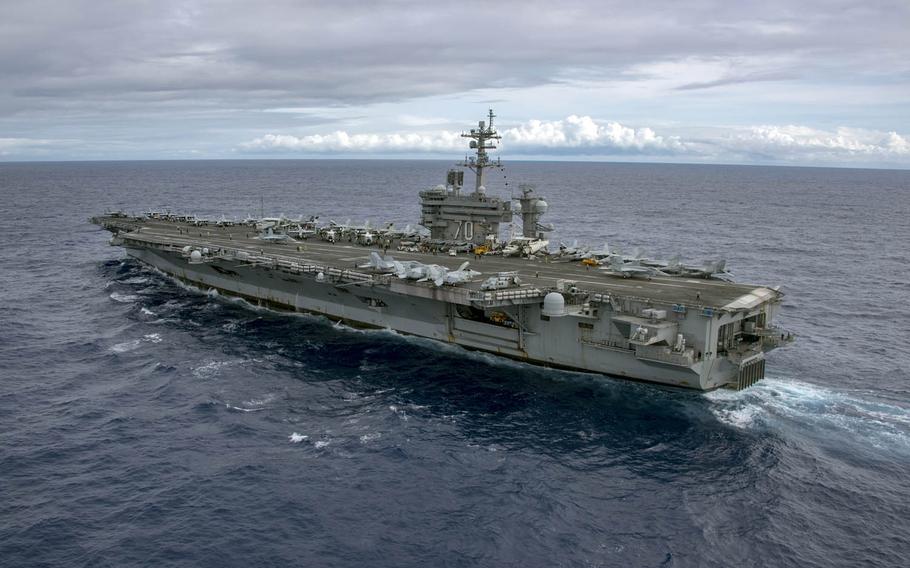 China has denounced “relevant countries” for threatening sovereignty and security in the South China Sea, following the deployment of the USS Carl Vinson carrier battle group on a routine patrol in the sea’s international waters.

“China always respects the freedom of navigation and overflight that countries enjoy in the South China Sea under international law,” China Foreign Ministry spokesman Geng Shuang said Tuesday in a press conference transcript posted to the ministry’s website. “But we oppose relevant countries threatening and undermining the sovereignty and security of coastal states under the pretext of such freedom. We hope that relevant countries can do more for regional peace and stability.”

The Navy regularly patrols the South China Sea, where more than $1.2 trillion in U.S. trade transits annually. China maintains an ambiguous claim to about 90 percent of the sea through markings on a map known as the nine-dash line.

The line was ruled noncompliant with international maritime law by an international tribunal in July, but China has ignored that ruling.

The Vinson carrier group began operations in the South China Sea on Saturday, according to a Navy statement.

It has deployed amid media speculation that one of its ships may conduct a freedom-of-navigation operation, under a program the U.S. uses to challenge practices that do not conform to international law.

The U.S. restarted its freedom-of-navigation operations in 2015 in the South China Sea after more than three years of conducting only routine operations. In the meantime, China has constructed more than 3,000 acres of artificial islands, according to the Pentagon, atop submerged reefs claimed by other nations.

The artificial islands also include radar, self-propelled artillery and facilities for military aircraft and ships.

The U.S. has conducted freedom-of-navigation operations nearby some of the islands under “innocent passage,” where ships perform no military operations or survey activities.

The Association of South East Asian Nations, which includes multiple countries involved in boat-ramming and other low-level conflicts with China over South China Sea territory, discussed Beijing’s growing power at a press conference in the Philippines on Tuesday.

“The ASEAN members have been unanimous in their expression of concern about what they see as a militarization of the region,” Philippine Foreign Secretary Perfecto Yasay said, according to Reuters.

However, Yasay expressed confidence that an ASEAN-China code of conduct for the South China Sea could be signed by June.

A code of conduct has been discussed for several years but never finalized, with South China Sea claimant nations often blaming non-claimants for striking side deals with Beijing to undermine an agreement.

Geng did not directly address the potential code of conduct but hinted at cooperation from Beijing on Tuesday.

“Thanks to the concerted efforts by China and ASEAN countries, the situation in the South China Sea is easing up toward stability and moving in a positive direction, Geng said.