China accuses US of hypocrisy for not ratifying international sea law 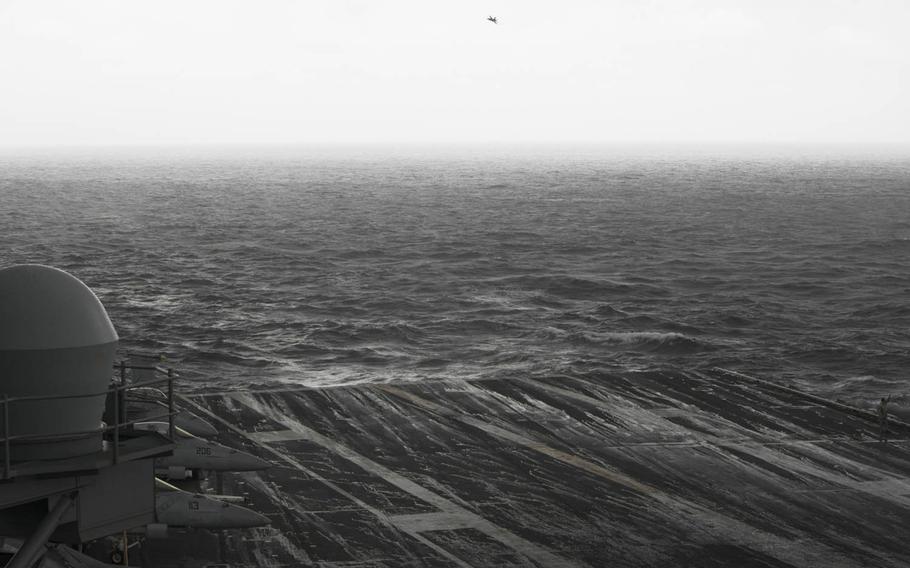 An F/A-18E Super Hornet prepares to make an arrested landing aboard the aircraft carrier USS Ronald Reagan in the South China Sea, July 10, 2016. The United Nations Convention on the Law of the Sea makes it clear that its member states are bound by decisions at the Permanent Court of Arbitration in The Hague, which found this week that China's perceived "historic right" to 90 percent of the South China Sea was both inaccurate and legally meaningless. (Ryan McFarlane/U.S. Navy)

YOKOSUKA NAVAL BASE, Japan — The United States is telling a defiant China that it must follow an international court ruling that rebuked its illegal actions in the South China Sea.

The Obama administration does so knowing the Permanent Court of Arbitration in The Hague can’t hold Washington to the same standards.

The United Nations Convention on the Law of the Sea makes it clear that its member states are bound by decisions at the PCA, which found Tuesday that China’s perceived “historic right” to 90 percent of the South China Sea was both inaccurate and legally meaningless.

The ruling found against China on at least 14 other main contentions, ranging from environmental destruction to illegally building artificial, militarized islands in the Philippines’ exclusive economic zone.

With its legal arguments largely discredited by the court, Beijing has continued to make a moral argument. It accuses Washington of hypocrisy.

Some in Washington say China has a point. Leaders in Congress and the U.S. military want the U.S. to finally ratify UNCLOS, citing it as a necessary step for the nation to provide global leadership. Some in the business community see the treaty as a step toward economic gains, particularly in the Arctic.

However, others view ratifying the treaty as entangling the country in a global bureaucracy, where gains from undersea resources could be used to fund Washington’s enemies.

Former President Ronald Reagan rejected the 1982 treaty largely because of concerns about rights to deep seabed mining, according to reports by The Heritage Foundation, a conservative think tank.

Some of those provisions were revised in 1994. President Bill Clinton supported the agreement and sent it to the Senate, where it stalled.

Since then, each president and most of the military’s top officials have publicly supported passage. However, the treaty has never gained the two-thirds majority support needed from the Senate for ratification.

“I think that in the 21st century our moral standing is affected by the fact that we are not a signatory to UNCLOS,” said Adm. Harry Harris, head of Pacific Command, during congressional testimony in February.

The Navy still follows the treaty’s navigational rules and concepts.

UNCLOS grants all seabed resources within 200 nautical miles of a country’s shoreline to that country. However, the U.S. “extended continental shelf” goes beyond those limits and may include extremely valuable natural resources, said Steven Groves, head of Heritage’s Freedom Project.

The treaty, which is founded partially on the principle that the seas are “the common heritage of mankind,” requires a portion of any royalties generated beyond 200 nautical miles to be transferred to an international authority.

“The Authority is empowered to distribute those funds — considered ‘international royalties’ — to developing and landlocked nations, including some that are corrupt, undemocratic or even state sponsors of terrorism,” Grove wrote.

The U.S. Chamber of Commerce, a powerful business lobbying group, supports ratifying the treaty as a framework for offshore mining and other ventures.

“U.S. companies are not willing to invest the billions of dollars necessary to exploit Arctic resources unless they have the clear legal rights guaranteed by the Convention,” wrote John B. Bellinger III, adjunct senior fellow at the Council on Foreign Relations.

The last suggestions of ratifying UNCLOS died quickly in 2012, with at least 34 senators in opposition. How newly elected senators view the issue could swing the vote if the treaty re-emerges in the Senate.

Sen. Dan Sullivan, who was elected in 2014, has alternately supported and opposed UNCLOS, according to media reports. He is from Alaska, a state that would have one of the world’s largest exclusive economic zones in the ocean if it were an independent country.

He struck a cautious tone during a speech in Washington on Tuesday, calling for the treaty to receive a thorough Senate debate.

Meanwhile, the treaty’s long-term supporters reiterated their calls for ratification, citing it as an important step for maintaining peace in the Asia-Pacific, a region crucial to the U.S. economy.

“The treaty is the foundation for [The Hague] ruling, and U.S. support for UNCLOS will be critical if we are to be successful in advocating for the rule of law throughout the region,” said Jack Reed (D-N.H.), the ranking member of the Senate Armed Services Committee.