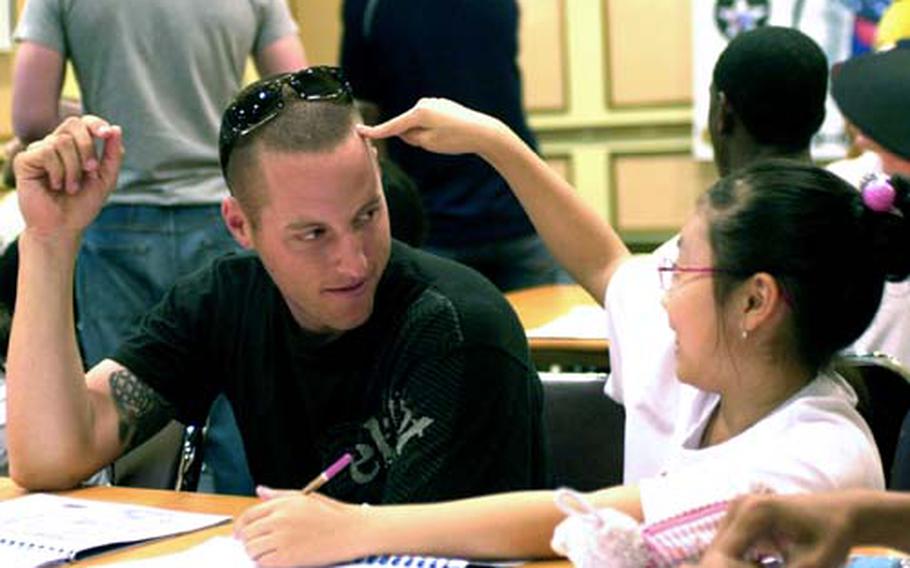 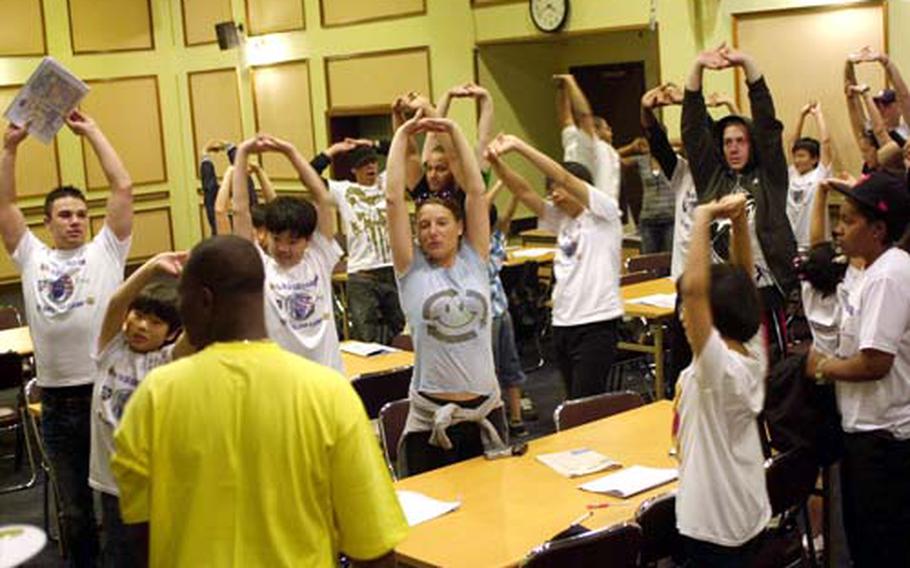 She poked him in the head. She took his sunglasses and put them on her face. She grabbed a bunch of pencils in her hand and pretended they were a microphone into which she wanted him to sing.

The girl&#8217;s antics may not have been the most conducive to learning the lyrics, but the bonding she did with the soldier was one of the bigger goals of the four-day camp that ended Friday.

"I want to teach the children American culture," said Sophia Lim, the USO&#8217;s Area I program coordinator. "And, many of the soldiers &#8230; just got here, and they don&#8217;t know anything about Asian culture. So, they&#8217;ve gotten a good experience and learned about Korean culture and Asian culture together."

Theilicker said that despite the "hyperactive" nature of some of the children, "It&#8217;s great to hang out with these little kids and teach them some English and learn their different personalities and how they live. They&#8217;re cool to hang out with."

More than 30 children from 12 schools in the Camp Casey area attended the camp, along with a comparable number of soldiers. The camp is one of the Area I programs aimed at enhancing relations between the U.S. military and the local Korean community.

Lim, who has been involved in all seven 2nd ID English camps to date, said the focus of the lessons has changed over time.

"When we started the English camp, it was just basic conversation and basic translation. Now our focus is useful stuff," she said, citing the slang found in such things as song lyrics and movies.

But it was clear to anyone looking on Thursday and Friday that children and soldiers alike were more into fun than adjectives and adverbs.

In between lessons, the group visited a variety of places, including the 2nd ID museum at Camp Red Cloud, Soyo-san Mountain and the Camp Casey Bowling Center.

Lee Yeon-soo, 15, said lunchtime was the highlight of her camp experience.

"The teachers are very kind," she said.

Spc. Christopher Jones sounded like an overgrown kid himself when he was asked to describe the camp experience.

Asked what the highlight of the camp experience was for him, the boy put his hand on Jones&#8217; back and said, "I have friends."