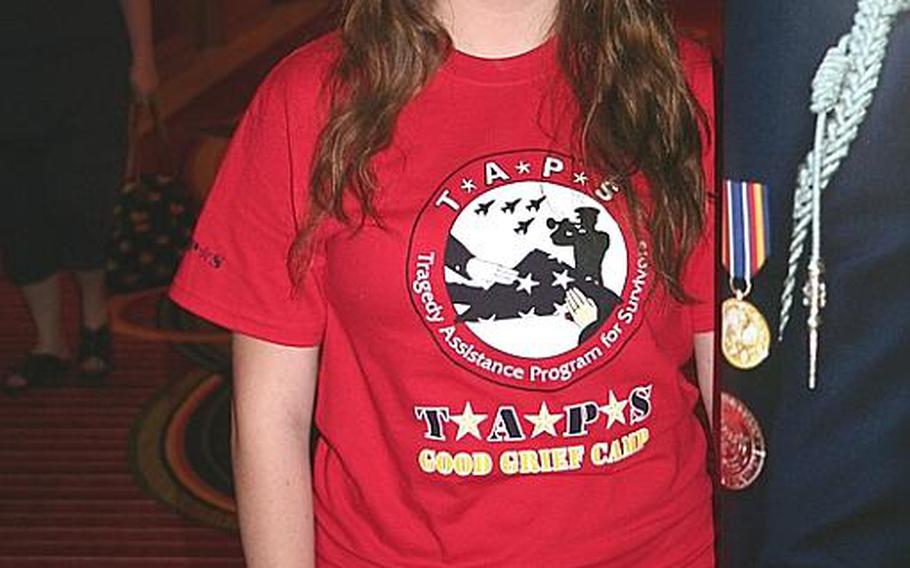 Buy Photo
Erin Gallagher&#39;s father commited suicide in May 2006. Gallagher, 16, said that coming to grief camps helps her remember the good times she had with him. (Jeff Schogol/Stars and Stripes)

Buy Photo
Erin Gallagher&#39;s father commited suicide in May 2006. Gallagher, 16, said that coming to grief camps helps her remember the good times she had with him. (Jeff Schogol/Stars and Stripes) 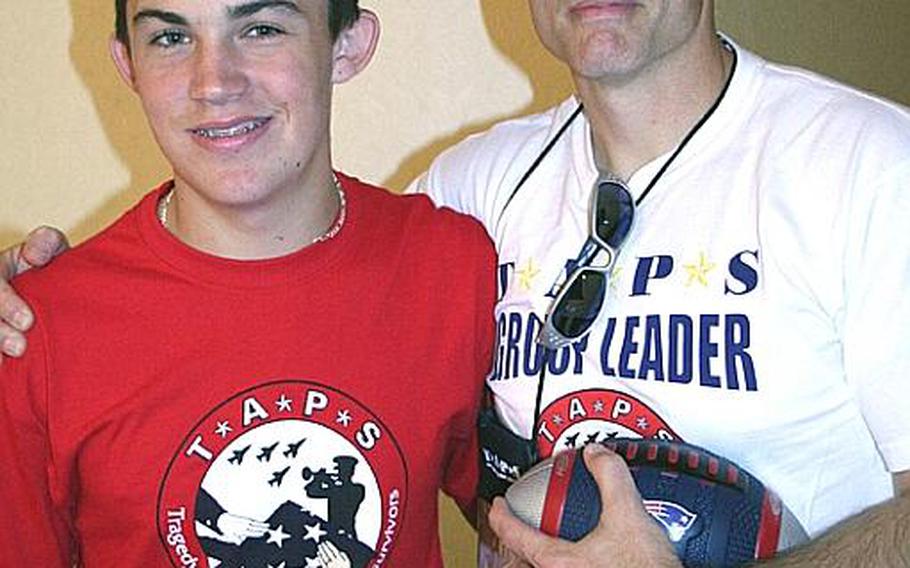 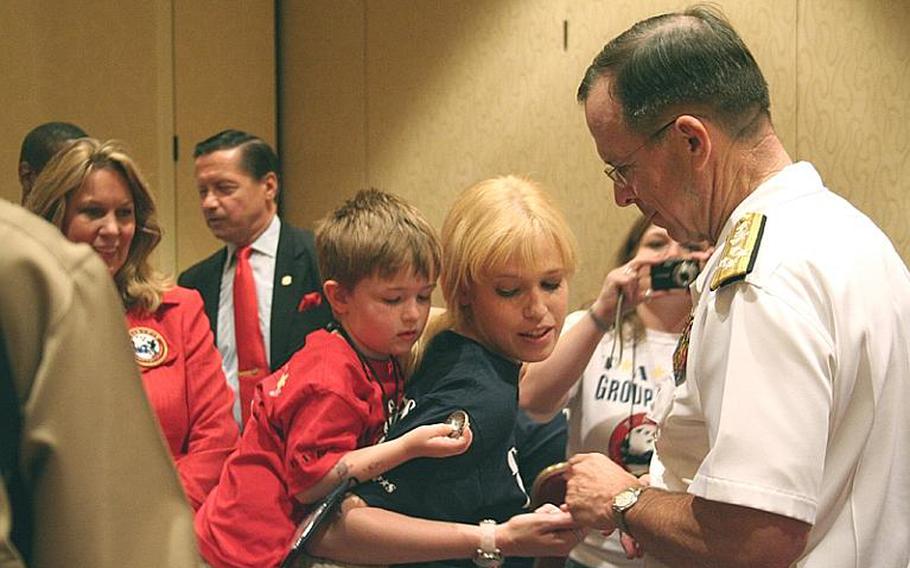 Buy Photo
Adm. Mike Mullen, chairman of the Joint Chiefs of Staff, hands a coin to one of the roughly 375 children who lost a loved one in the military who attended "Good Grief Camp" Friday run by the Tragedy Assistance Program for Survivors. (Jeff Schogol/Stars and Stripes) 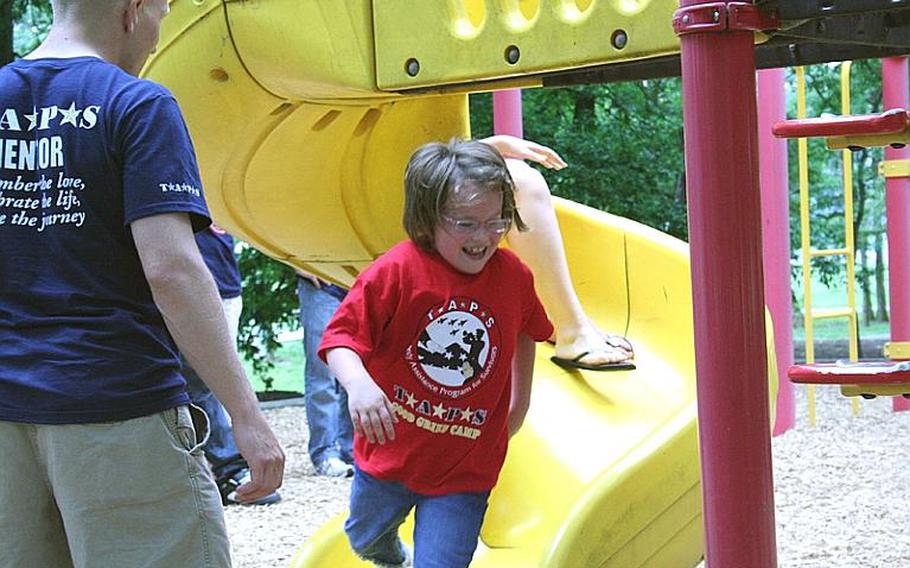 Buy Photo
Sophia Cox, 7, lost her father in Afghanistan in 2008. "My dad, he was a great soldier and he never gave up," she said. (Jeff Schogol/Stars and Stripes) 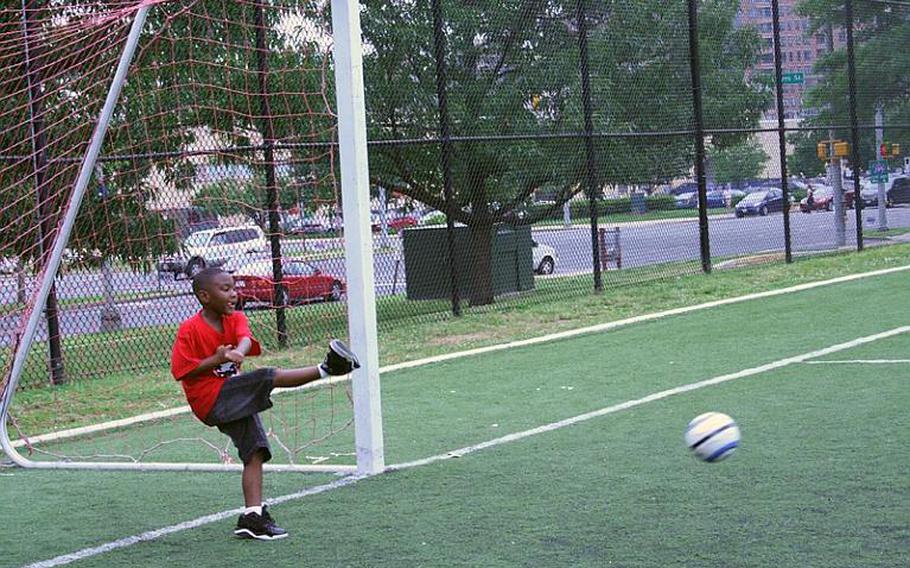 Buy Photo
Alshawn Jeffcoat, 7, keeps a picture of his brother on his shirt to always remember him. His brother died in a November 2003 helicopter crash in Iraq. (Jeff Schogol/Stars and Stripes)

ARLINGTON, Va. &mdash; Alshawn Jeffcoat is too young to know what Memorial Day is all about. But for the 7-year-old, whose brother was killed in a helicopter crash in Iraq, just knowing that his brother served his country makes him happy.

"He helped people," said Alshawn, who often attaches a picture of his brother to his shirt, a small gesture in remembrance of a man he never knew.

On Friday, Alshawn was one of a dozen children who had lost loved ones in the military who were gathered in a park near the Pentagon, ready for some holiday weekend fun.

Sophia Cox was there, too. She&rsquo;s also 7 years old, but she sounds pretty grown up when she talks about her father, who was killed in Afghanistan.

"My dad, he was a great soldier and he never gave up &hellip; and he died in a IED wreck," she said of Army Staff Sgt. Nathan Cox, who was killed by a roadside bomb in 2008.

The two were among about 375 children who attended Good Grief Camp, part of a four-day event sponsored by the Tragedy Assistance Program for Survivors, an advocacy group for families of fallen servicemembers.

At the camp, children can share their emotions and learn they are not alone. They conduct a series of activities known as "grief work" to help them cope with the pain, according to TAPS.

This was Sophia&rsquo;s first time at camp. She enjoyed making "press balls."

"If you&rsquo;re really mad, you can press on them &mdash; we made them out of balloons," she said.

Sophia also made a book titled "Me and My Daddy" while at camp.

"I love my book a lot and it talks about my dad a lot," she said.

She remembers reading with him, going biking together and going to Pope Park in North Carolina.

"We used to see these big, big, big, big airplanes that had shark teeth and stuff &mdash; they used to paint &rsquo;em," she said.

The 16th annual camp was for all ages, no matter how their loved ones died.

"So many people tell me my dad that was a hero for what he does &mdash; did &mdash; and how much he means to the country," he said.

Sixteen-year-old Erin Gallagher&rsquo;s father, Marine Gunnery Sgt. James F. Gallagher, killed himself shortly after returning from a deployment in May 2006. She has been to several grief camps.

"It just really helped me remember his life and his purpose and all the really good times we had together and how much he really did care about me," she said.

The TAPS family weekend ends Monday with a visit to Arlington National Cemetery.

A wreath bearing the traced handprints of the Good Grief campers will be presented at the Tomb of the Unknowns &mdash; a special tribute to the loved ones lost.

On Friday, Adm. Mike Mullen, chairman of the Joint Chiefs of Staff, addressed the gathering and underscored the importance of helping children come to terms with loss. Mullen recalled attending the recent dignified transfer of five fallen troops at Dover Air Force Base. Specifically, he remembered meeting 9-year-old Logan, the son of one of those servicemembers.