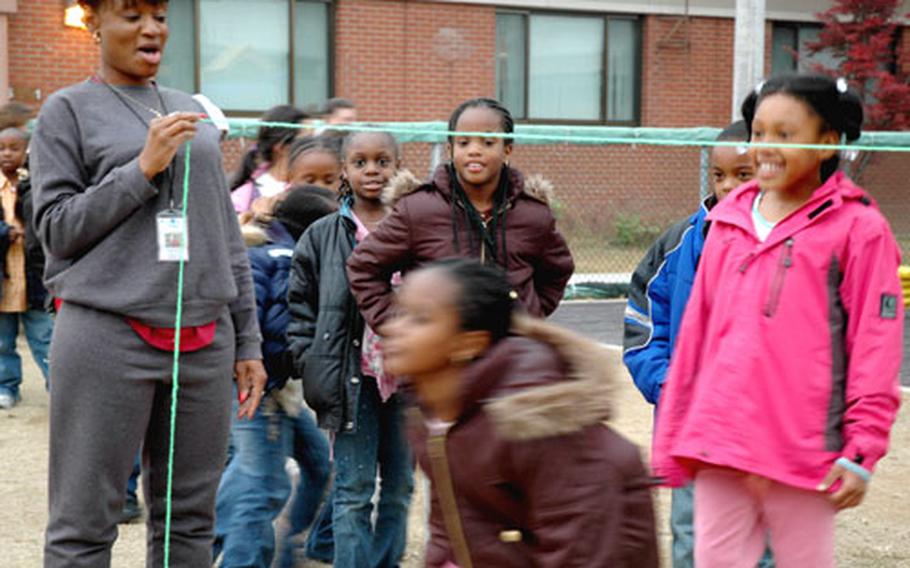 Children do the limbo outside the Child and Youth Services building on Yongsan Garrison Tuesday afternoon during the School-Age Services program. This before- and after-school program offers services for USFK families in which both parents work. (Teri Weaver / S&S)

Children do the limbo outside the Child and Youth Services building on Yongsan Garrison Tuesday afternoon during the School-Age Services program. This before- and after-school program offers services for USFK families in which both parents work. (Teri Weaver / S&S) 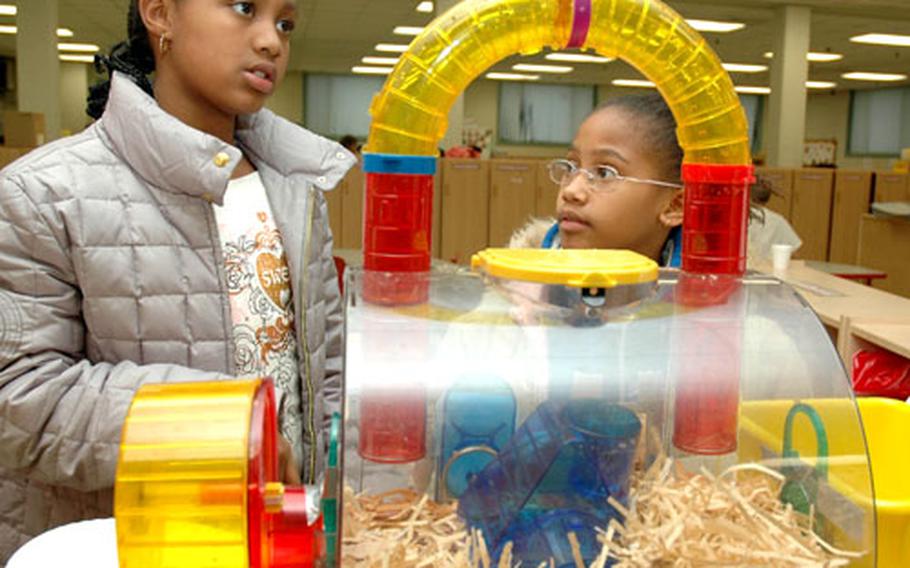 Dominique Crawford, left, and Kiyahna Gay talk about the hamsters and hamster babies at the Child and Youth Services building. Both girls participate in the School-Age Services program. (Teri Weaver / S&S)

YONGSAN GARRISON, South Korea &#8212; The military organization that heads up child care and youth activities here is opening five caregiver jobs to South Korean workers in an attempt to combat persistent vacancies, according to the coordinator of Child and Youth Services.

About 40 vacant positions are spread throughout Child and Youth Services in Area II, from child-care providers to clerks to curriculum leaders to managers, said Roxanne C. Chancellor.

The vacancies mean many of the other 132 people within the agency must divide their time among the Child Development Center at Yongsan, the School-Age Services programs for before- and after-school care and other programs to provide care and meet proper caregiver-to-child ratios, she said.

&#8220;It&#8217;s like a roller coaster,&#8221; Chancellor said during an interview on Tuesday when describing the ebb and flow trying to meet staffing changes while serving more than 3,000 kids during the last year.

To try to battle that dynamic, Chancellor recently received permission to hire South Korean workers for five part-time positions as caregivers at the Child Development Center.

Were the center fully staffed, it could increase its customer base by another 15 percent, said Brenda McCall, Area II Family Support Division director.

The staffing constraints mean that, for now, only families with both parents working qualify for slots at the CDC and at the before- and after-school programs, Chancellor said. All kids can take part in the organization&#8217;s middle school programs and sports leagues, provided they pay an annual registration fee and special sports fees.

The staffing problems have existed since Chancellor took over in December 2001, she said, citing causes such as constant moving for military families and the challenges of providing child care.

Caregivers at the CDC, for instance, typically start in part-time positions and are paid a little more than $9 per hour. They must be willing to work shifts starting before 6 a.m. or stretching until 6 p.m. The center provides weekend care during large military exercises and also offers a parents&#8217; night out once a month, which means caregivers work Saturday nights.

Newly hired caregivers usually receive a raise after six months of work, McCall and Chancellor said. Workers also can take college classes and receive tuition reimbursement if the classes are related to child care, they said.

Last week, Child and Youth Services filled seven vacancies, three of which were to start the day after Thanksgiving, Chancellor said. She also hopes that opening five jobs for South Korean workers will help provide more stability within an ever-moving workforce. If that hiring process works well, there&#8217;s the possibility more jobs may open to Koreans, she said.